THE ECCLIAN, STAFFORDSHIRE – A hot air balloon hangs above the horizon like a dreamcatcher for the county. And the last squeezes of sunshine the season has to offer linger warm in the air.

It’s a fine day indeed. And yet behind its pleasant appearance, there’s a sense of unease; an awareness that the nights are drawing in, and it’ll soon be getting much colder…

I was told a story recently about a submarine crew that went out on patrol in February, and only resurfaced and returned to port in August. What an experience it must have been to come ashore and discover a world so different to the one they left.

I expect quite a few people fantasise about being a submariner these days. The idea of being totally insulated from the chaos ashore, utterly removed from the news and WuFlu/Brexit/[insert media item of hysteria here] uncertainty for months on end will sound positively romantic to some.

I’d suggest the Royal Navy run a special recruitment campaign to hoover up the new candidates, but I’m not sure they’d attract the calibre of man they’re after. If you let your environment command your emotions, you probably won’t fare well when you’re hundreds of fathoms deep with an arsenal of nukes for company.

As the UK bond market heads below the waterline into the depths of negative interest rates, investors must ensure their portfolios can handle the pressure.

A year ago, I was gleefully crowing how the UK (and other nations which bear our sovereign on their banknotes) had avoided the calamity that are negative interest rates (Five avoid negative rates – 6 September 2019).

But then the WuFlu struck, and after years of valiant resilience, our defences were breached. In May, for the first time in our great nation’s history, Her Majesty’s Treasury began being paid to borrow money (The enemy has arrived on our shores – 21 May 2020). While this ominous phenomenon may be currently limited to our government’s debt, it’s continuing presence is a canary in the coal mine, a flashing indicator that negative interest rates are coming to the banking system. Think you don’t earn anything on your deposits any more? You ain’t seen nothin’ yet…

It’s spreading – and the further it spreads, the more likely we’ll see the negative rates appear at the banks: 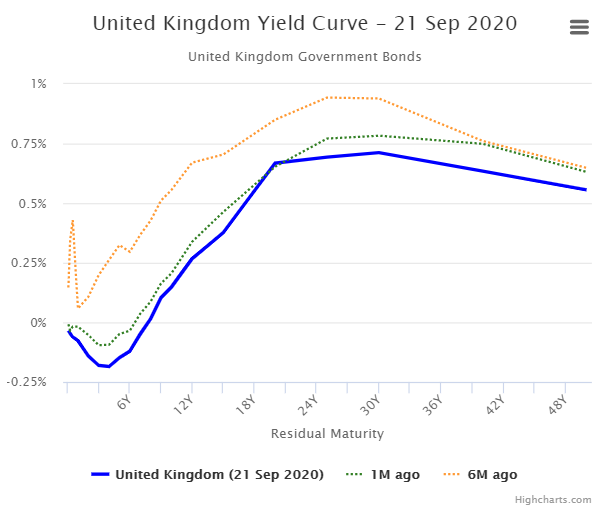 The interest rate the world is charging our government to borrow money (blue line). Interest rate indicated on the left, duration of the loan displayed on the bottom. Note how the curve has dived over the last 1-6 months (indicated in green and orange).
Source: worldgovernmentbonds.com

Interestingly, while it’s auctions for government debt at the Treasury (run by the Debt Management Office) where all this action has taken place, the Bank of England is now upping the rhetoric on the possibility of taking interest rates into negative territory too. From the Financial Times:

Sterling dropped and UK government bond prices pushed higher this week after traders spotted signs that the Bank of England might be seriously considering cutting interest rates below zero — a reaction that has taken the central bank itself by surprise.

In minutes accompanying its latest decision to keep policy on hold on Thursday, the BoE said it would “begin structured engagement” with regulators on how an unprecedented slide into sub-zero rates might work, and that rate-setters had been briefed on how to take the step “should the outlook for inflation and output warrant it at some point”.

Several banks interpreted this as a signal that negative rates could become a reality, despite the BoE’s reluctance so far to take the step.

“The Bank of England gave a stronger warning that cutting interest rates into negative territory is a realistic possibility,” said analysts at Bank of America. “Publishing this paragraph feels like news. It suggests to us that the BoE is more prepared to use negative rates than we thought…”

After the Bank of England began printing cash overtime in March to stop the government from running out of money in March (Ways and means of printing money – 15 May), it took a step back from the prospect of negative rates. But it seems the plan has changed. Just as the government wants everyone to believe a second lockdown will arrive if they don’t behave… the BoE is threatening to enforce the ludicrous interest rates required to keep the debt wheels turning while everybody is inside.

We’ve discussed the possibility of a second country-wide lockdown in this letter before – and despite fervent signalling from the government to the contrary, I still don’t think it’ll do it again.

But whatever the case, the interest-rate submarine is diving deeper – with nukes in store for savers, pension funds, and insurance companies. Make sure your portfolio can handle the pressure.

PS They’re calling it “The September Slaughterhouse”. Here’s the 24hr performance on the global stockmarket as of this morning:

Fancy a look at the FTSE? My colleague Sam takes a damage assessment here.