ABERDEEN, SCOTLAND – It’s coming up to a year now since the WuFlu “metal famine”, when it became nearly impossible to obtain gold or silver from bullion dealers. Remarkably, the situation today feels very similar…

Last March, the supply chain disruptions caused by the pandemic, coupled with the sudden demand for precious metals from the panicked public rapidly drained bullion dealers of their inventory. It was a struggle to get your hands on any physical metal without paying a steep premium – and that was provided you could find a bullion dealer with any stock. This eased considerably once a few months had passed – supply shortages eased, and the hunger for bullion was satisfied.

But fast forward to today, and problem rises once again. While it is possible to get your hands on precious metals, almost all of the bullion dealers are having trouble meeting soaring demand.

In last week’s note (The Sovereign and the Satoshi – 19 Feb), I detailed my intention to rotate some of my bitcoin profits into gold – specifically, gold sovereigns. It’s been quite an adventure looking around for said sovereigns, as I’ve discovered supply has become incredibly tight.

The discreet yet sophisticated ATS Bullion dealership in London normally has a wide range of gold sovereign coins available – it has 58 different types on its website for sale. But at the time of writing, each variety is out of stock, bar two.

Meanwhile, the prestigious Chards dealership in Blackpool will sell you gold sovereigns… but you must commit to an indefinite waiting period if you want to get ‘em at best value (buying sovereigns from mixed years in bulk).

The big boys meanwhile – the wholesale vendors like UKBullion, Gold.co.uk, and BullionByPost – have sovereigns on offer, but you’re looking at a delay of maybe a week or more between making your order and it getting sent out to you.

Thankfully, my personal favourite, the small Devon-based Bleyer Bullion, has some sovereigns in stock and isn’t warning of long waiting times. Similarly, Sharps Pixley appears to be unscathed – despite its glossy showroom by the Ritz being shut. Funnily enough, almost two years ago to the day in The Great British Gold Grab we detailed how Ross Norman, the CEO of Sharps, was offering to buy all the bullion Britons would sell him for a very generous rate. In retrospect, that appears to have been a very shrewd trade indeed.

(NOTE: neither I nor Southbank Investment Research have a commercial relationship with any bullion dealer.)

What makes this gold shortage particularly curious is the recent performance in the gold price. It’s not like there’s been a firework display of new all-time-high prices in recent months to draw in greedy eyes: 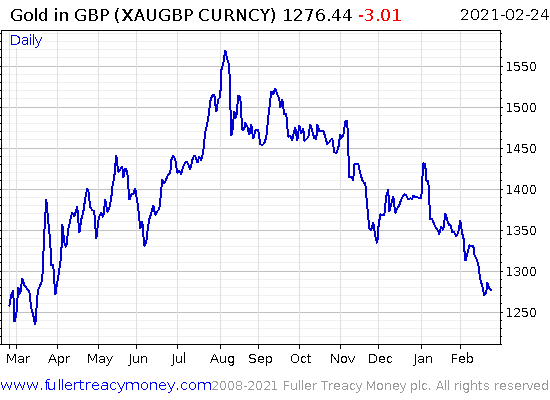 Back then it was the dollar squeeze which was pushing down gold (and everything else) – large players were being forced to sell their positions to meet margin calls and raise cash, and the value of the dollar soared. Meanwhile, the everyman was scrambling to protect his wealth amid the chaos, buying up all the bullion that wasn’t nailed down.

Today, it’s not a liquidity drain that’s pushing down the gold, it’s higher long-term interest rates in the bond market. The more money you can earn “risk free” in government bonds, the less appealing gold appears in the eyes of large investors (like pension funds) who have returns they need to make.

As you can see, gold’s decline from its peak in August (green) is occurs just as US government bond yields (the global interest rate benchmark) bottoms and starts rising (blue): 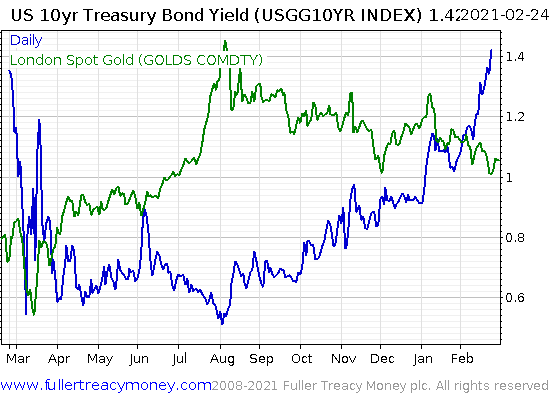 I don’t think it’ll be long until that rising interest rate breaks something in the financial system and the Federal Reserve steps in with the printing press, but that’s for another letter. Last March, it was fears of a societal breakdown that was driving the everyman to precious metals – what’s driving him now?

While the lockdowns continue to cause supply chain dysfunction across the board, I’m confident that isn’t contributing too much to this phenomenon (unlike a year ago).

Is this a reflection of the public (rightly) fearing inflation coming? After decades of solid performance, is the everyman just learning to “buy the dip”? Or is it the WallStreetBets crowd trying to squeeze the metals markets like a band of digital Hunt brothers?

Google Search popularity in the UK for “gold price” since 2004. The two peaks on the far right are in March and August last year.
Source: Google Trends

In the meantime, if you know the collective noun for “sovereigns” (or can think one up), please let me know it – for I’m stumped: [email protected].