Your kids will not know what money is

Your kids will not know what money is

“Anything other than a big ease could see a rally in the euro.” I wrote yesterday. Said rally took place right on cue. See the chart below in which the euro climbs over 3% against the US dollar. It was the biggest one-day gain for the currency in six years.

The president of the European Central Bank (ECB) disappointed those who have become used to “free money to change your life”. The ECB’s six-member executive board did what most observers expected. It lowered its deposit rate on excess reserves from -0.2 % to -0.3%.

Negative deposit rates are supposed to encourage banks to lend more money by penalising them for ‘hoarding cash’. This is why we’ve been writing so much about the imposition of negative rates on your bank deposits. This is one battle in the war on cash.

In principle, the ECB’s negative deposit rates are the same as Andy Haldane’s idea of negative interest rates on your savings. The idea is to make saving so painful that you force people to spend, thus producing prosperity and growth (even if it’s against your will and perhaps your financial best interests). 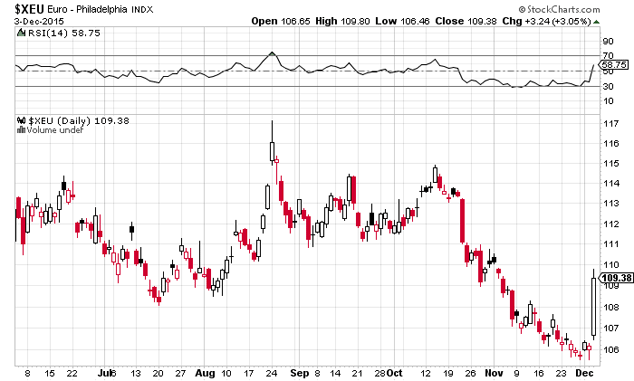 Nick and I talked about this yesterday on a very brief podcast. Evidence from Switzerland suggests that negative rates actually increase cash hoarding. In other words, they have the opposite effect of what’s intended. We also talked about the prediction by Apple CEO Tim Cook that “your kids will not know what money is”.

Why so much discussion of cash and the future of money?

We live in a monetary world that’s largely experimental. Central bankers are trying things they’ve never done before. They have no idea what the results will be. They’re making it up as they go along.

Which brings me back to Draghi. The ECB extended its asset purchase programme by another six months to March 2017. And it added regional bonds to its mix of assets eligible for purchase. Yet neither measure was enough to satisfy investors addicted to ever greater stimulus. The S&P 500 and the Dow Jones Industrials both fell by 1.4%.

All up, yesterday was confirmation that the ECB’s bond-buying programme (left at €60bn with no increase) is about allowing deficit spending ad infinitum for EU sovereign states. The banks are in on it as well because they are chock full of government bonds. The bond market (bubble) must be supported at all costs, by any means necessary, or “whatever it takes” as Draghi himself said in 2012.