THE KINGS ARMS, STAFFORDSHIRE – “It’s like he’s consistently lucky. Which means there’s something we’re not getting…”

So remarked our energy analyst Kit Winder to me the other day (via text). He was describing the performance of Sam Curran, a key player in England’s recent close-shave win over the Aussies at cricket. The young bowler in question had a great game, but to Kit his success was hard to disassemble. His sudden seizing of two wickets in succession was spectacular… but how had he actually done it?

When it comes to “consistent luck” and “something we’re not getting” in the markets this year, it’s the US tech sector which has both amazed and confused investors. What is it with these companies, what tricks do they have up their sleeves, that’s made the likes of Amazon and Tesla go off like a lockdown-triggered firework show? 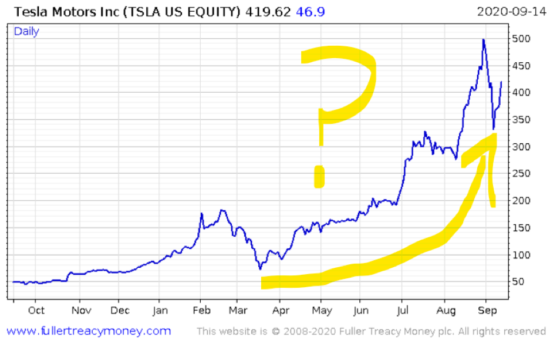 If you’ve been reading this letter for a while, you’ll likely be familiar with some of my attempts to explain this phenomenon. During my time away, I’ve been examining another theory which tries to piece together the puzzle. It’s controversial, conspiratorial, and damn hard to prove or verify. In other words, it‘s a classic and entertaining investment thesis from the fringe.

I normally leave it to Kit to make comparisons between “the game of empire” and investing. It was him who got me into the sport late last year, and my knowledge of the sport is still limited (mostly to Australia’s innovation in “enhanced ball-polishing techniques” in 2018 against South Africa).

I came across my first village cricket match the other day. It’s not something I ever encountered growing up in Scotland, and I was glad to finally see the quintessential image of rural England for myself, complete with church in the background: 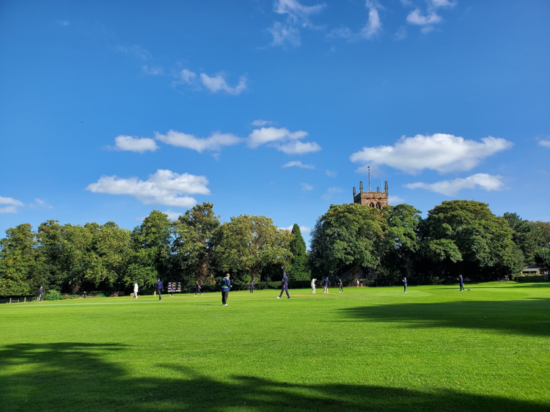 Proud residents of Staffordshire may well want to shoot me for saying it, but the first thing this made me think of was the design on Yorkshire Tea boxes

But back to that theory on the tech rally, which regards a different “game of empire”…

This explanation for recent market events centres around the US’s role as the issuer of the world’s reserve currency (the US dollar) and the privileges that come with that. Due to the US’s position at the heart of the global financial system, capital flows from the risky areas of investment markets into US assets during crises. It’s like how your blood retreats from your skin to keep your heart and organs warm when your body is suddenly exposed to cold.

This dynamic of capital leaving emerging markets to purchase American assets during a crisis takes place even when said crisis originates in the US – like in 2008. It’s a superpower’s – nay, an empire’s – privilege, one the US has enjoyed effectively since the end of the Second World War.

(While the US is not an empire on paper, when you consider the economic, financial and military force it could bring to bear upon the world if it wanted to, it may as well be one. I expect this is going to become much more apparent as time goes on as we see more and more overt flexes of this veiled muscle against countries that do not swear fealty – but that’s a subject for another letter.)

When crisis strikes and capital races to US markets for safety, this capital chases US assets traditionally seen as safe – government debt, high quality corporate debt, and reliable dividend-paying stocks.

But what some believe, is that this time, Uncle Sam has pulled off a cunning twist to the tale. Instead of that cash just hitting the “safe” assets, some believe that – with a little skulduggery – the Federal Reserve and the US Treasury have deliberately diverted that capital into a much riskier area: US tech stocks. The aim of this would be to make it look like an internet revolution led by the US is underway, and that economic growth is continuing despite the lockdown in the US’s digital economy.

The mechanism by which this could take place would be through the large market-making firms like BlackRock, which are large enough and control enough capital to give stock prices a strong nudge up or down, were they so inclined and confident they wouldn’t be punished for it. It’s institutions like these which actually receive much of the cash being directed towards US assets during a crisis, and are at the same time very committed to keeping the US market stable (as it’s good for business), so you can see how they’d be open to such a request from the Feds.

The problem with this theory is that it’s damn hard to verify – nobody involved in such chicanery is gonna admit to it. This is just one possible explanation for why a smaller and smaller cohort of tech stocks (now in the single-digit range) have been gaining truly staggering valuations while the rest of the US and global market stockmarket has been stagnant by comparison.

While this all may sound wildly conspiratorial, the US government has told financial institutions to buy stocks before. After the Black Monday crash in 1987, the Fed directed investment banks like Goldman Sachs, Salomon Brothers, and even Warren Buffett himself to buy stocks to get prices and confidence up again. Is it really much of a stretch to think that a similar strategy is in play today?

I wonder. It’s an entertaining theory at least.

But here’s something to mull on: if you were directing this manipulation… if you were playing such a “game” with the stockmarket to make your nation look good through the WuFlu crisis… what would be your next move?

PS I hope you’ve been enjoying my colleague Will Dahl’s letters in my absence. As you’ll likely have noticed, he predicts quite a different outcome for the US election than I do (see: The elephant in the living room – 4 September), expecting a strong Biden victory in November, with Trump kicked out of the White House and unlikely to return.

At the rate this year is passing, we’ll find out who is correct in no time at all…