The elephant in the living room

The elephant in the living room

The results are in.

… and it ain’t looking good for Joe Biden: 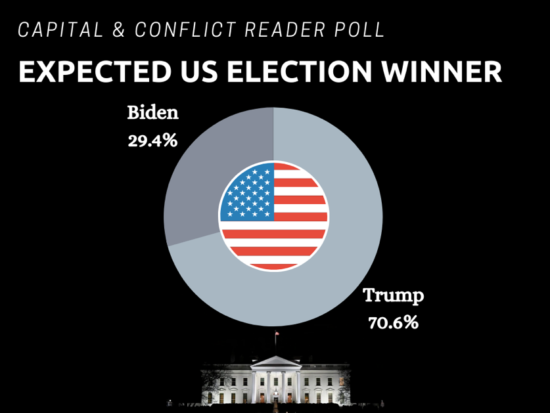 Thank you for all who voted in our election poll – the more of these polls we do, the more of you seem to enjoy voting on them, so I’ll be sure to do more of them in future.

I’m always interested to hear your thoughts on the themes I explore in this letter, but of course many of you don’t have time to share your views with my editorial inbox and polls make for a neat “halfway house”.

While it’s my job to provide an alternative perspective, I must confess that I agree with the majority and strongly expect we’re in for another Trump presidency. I think support from the Democrats for harsh lockdowns, their hesitation to condemn rioting, and their engagement with ideas such as defunding the police – not to mention the weakness of the Biden/Harris presidential ticket – will cost them the election. Ultimately, I think support for “law and order” from your average American (a la Richard Nixon) will carry the day.

Further, I think Trump might get a landslide victory, akin to BoJo’s in the last election here in Blighty. The 80-seat majority seized by the conservatives took many by surprise back then (including me), and I wonder if we may see something similar across the pond in November.

But of course, I could be completely wrong – I’m not an American after all. But you’ll soon be hearing from one…

I’m taking a short holiday to visit my family, and will be away from Capital & Conflict next week. But don’t worry, you’ll still be getting daily insights from us here at Southbank Investment Research. In my stead, will be a gentleman called Will Dahl – he’s an American analyst who joined the company recently. If you have any existing subscriptions with us, you’ll likely have already encountered him over at Southbank Investment Daily, our premium daily eletter.

Will takes quite a different view on the upcoming election – the total opposite, in fact. He reckons Biden is gonna clutch it in November on the back of Trump’s failings as president. He’s been making a measured argument for this over at Southbank Investment Daily, but while I’m away he’s gonna share some of his analysis with you – not to mention his considerable investing expertise.

Before I head off on my merry way however, it’s time for a rummage through the mailbag. I received a very interesting query from a reader on the subject of gold confiscation – that ever-present threat that lurks at the back of many a gold investor’s mind:

Gold investment risks as often discussed rarely include government confiscation or appropriation. In view of the monumental loans recently made, the chancellor has to find some way to pay for it all.

With our grossly diminished gold reserves a likely way would be to confiscate or ‘appropriate’ private gold ‘hoardings’. It being an obvious target particularly as it would only affect a minority of the electorate and of those being mainly traditional conservatives.

The PM expresses an admiration for president Roosevelt who banned all gold holdings by private individuals in 1933 to fund the state’s coffers.

So shouldn’t this be given a mention when discussing gold risks, it probably being the biggest risk of all?

Which brings me to my reason for writing. Do you consider it perhaps likely that (1) gold miners, (2) bullion ETFs and possibly (3) gold royalties might be included in the seizure? It possibly being safer to invest in miners than bullion. What do you think?

I have written to other advisers in the past but have never had a reply. It seems to be the ‘elephant in the living room’.

I remember asking Dominic Frisby about gold confiscation last year. He dismissed the idea, despite its historical precedent, saying that the gold market was “too small” for governments to really care about. I’m not so sure.

While it’s true that at the moment the gold market is indeed very small, should the gold price rise significantly that ceases to be the case. Should gold ownership become much more popular, to the point that it is seen to be a form of hoarding that is damaging the economy (reducing consumption in other sectors deemed more productive), then I can imagine some kind of penalty being applied to bullion acquisition and ownership. That would likely be a tax rather than a mandatory exchange of gold for fiat cash however.

It really depends on why the government would be after the gold in this scenario – for tax revenue, collateral for some form of international loan, or to build its reserves for some reason? I think there will be plenty of other sources of wealth targeted for tax revenue before gold is even considered, and the government is content enough printing money to lend to itself right now than to bother getting a secured loan from anybody else. As for refilling the Treasury’s FX reserves with gold, I think that’d be just swell, but I don’t see any desire for it to happen.

The argument that miners could actually be safer than bullion is an interesting one. I don’t think the government would go after the miners of bullion ETFs as that would significantly damage London’s reputation and role as the world’s financial centre and Commodity Capitol (unless they were really desperate for some reason).

We wrote a while back about the vast flows of bullion that are flowing into London’s vaults – driven by investors wanting exposure to gold that’s held in a safe place (Britannia brings back her bullion – 13 February). Never say never, but the government seizing the bullion of private investors is not something I’m expecting. That would jeopardise so much of London’s allure for international investment, which is one of the biggest advantages Britain has on the global stage.

Then again, there have been moments where the government has betrayed that trust when it comes to gold. The Bank of England de facto confiscated the gold it was holding for the Venezuelan government at the behest of the US State Department not so long ago, which certainly tarnished London’s image as a safe haven for capital held by the US’s adversaries.

Still, I don’t think Her Majesty’s fine young men will be marching into City vaults anytime soon to confiscate the glowing yellow treasure held by ETFs. The risk is not zero however, and it’s certainly worth your consideration.

Some folks like to go for high-carat gold jewellery over bullion to help negate this risk, as gold confiscation is generally only targeted at investment grade coins and bars rather than necklaces and bangles (the aforementioned measure by FDR in 1933 permitted gold jewellery ownership, for example).

It’s only in very authoritarian regimes that all gold including jewellery has been targeted as well. And jewellery is certainly much easier to explain when travelling around than a sack of gold bars. The downside is that jewellery generally comes with a much higher premium above the gold price than bullion, and you get kicked in the teeth with VAT as well.

I hope the elephant in the living room has been adequately addressed, anyhow.

On the topic of gold, ever wondered how many ounces of it you could sell your house for? At least one of you has, as detailed in an interesting response to Tuesday’s letter – The greatest market rally of all time.

To emphasise that gold is a preservation of capital, a store of value
and not an investment I did a gold/property ratio comparison between 1969 and today. At the time of the “Italian Job” it took ~300 ounces of gold to buy a UK house, whereas today, ~150 ounces. This is consistent with US house prices too. So – are houses cheap or is gold cheap?

Re. New Zealand; it would have taken a similar ~264 ounces of gold to buy the average New Zealand house back in 1969. House prices in the South Sea Socialist Peoples Republic have rocketed in recent years to the extent the socialists have prevented foreign buyers from buying. The $8,000 1969 house is now a staggering $700,000 house – but it requires the same ~264 ounces of gold to buy it.

That’s all from me for the moment – I’ll be back later on this month.

PS If you’re interested in keeping up with the financial stories I’m following while I’m away, you can follow me on Twitter. And be sure to check out what’s been going on at Exponential Investor, where my colleagues Kit Winder and Sam Volkering have just launched a new podcast...