The year of our Lord two thousand and twenty just keeps on delivering the goods.

Remember this chart of Tesla I showed you a month ago (A Looney Tune you don’t want to miss – 10 June)?

I thought Tesla ($TSLA) – the infamous electric vehicle company – quadrupling, halving, and then doubling over the course of 12 months was nuts. I thought this was looney tunes.

My dear Reader, how wrong I was.

Turns out I was missing the bigger picture.

Over the last four weeks, $TSLA nigh-on doubled in price. In fact, during intraday trading, it did, managing to graze $1,800 a share at one point (the chart above only shows the share price at the close of each trading day).

I remember Eoin Treacy highlighting Tesla as the stock that would perform the best in a melt-up scenario back in 2018 – how right he’s turned out to be.

And then later in the day…

The reasons behind the mind-boggling ascension of $TSLA vary. Some think this is a story of how a single company with a charismatic CEO has become the darling of the everyman investor (and his kids) brought about by its appeal as a company of the future. Some look to how the popularity of trading options, especially amongst youngsters, has injected adrenaline into this stock’s price.

This would definitely tie in with the boom in renewable energy stocks that James Allen’s subscribers at Exponential Energy Fortunes have been getting rich from.

Others see this price rise as a result of the market anticipating $TSLA to be added to the S&P 500 index, which would see billions of dollars from passive investors automatically piling into the company. Get in on the stock ahead of that, and you can front-run one of the biggest waves of capital in history: the passive investment flows coming from BlackRock and Vanguard who are investing on behalf of pension funds, sovereign wealth funds, institutional money and more.

While I was wrong on the length of this particular Looney Tunes episode, I can’t help but think something has to snap soon – that chart of $TSLA would fit in amongst any of the dot-com boom darlings that rocketed higher in a fashion nobody had seen before. But as investor Peter Atwater commented recently, “Rockets carry a finite amount of fuel”.

Perhaps this image is not “Gold investors, 2030AD” after all, but “Tesla dealership waiting room”: 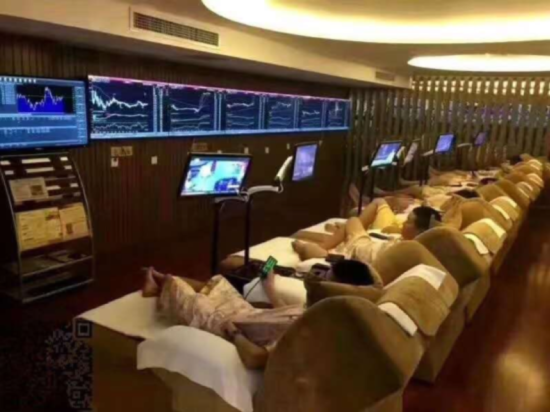 Thank you for your suggested captions for this image – “Long Titanic futures” clinches it for me. I can only imagine what those who are long $TSLA futures are up to….

But I was also amused by this suggestion from a reader, that this was a depiction of “lounge MMT” (Modern Monetary Theory).

Welcome to lounge MMT. Our chairs massage you while we massage the markets. So sit back and relax.

Were such a lounge to exist, it would certainly have ample membership these days. Given the vast increases in government spending everywhere, Modern Monetary Theory would appear to be very popular now, just never referenced by name.

MMT, a description of where money comes from and how it circulates in the economy, is not prescriptive in how money should be spent by the government – but it allows for nearly unlimited government spending which makes it rather popular amongst radicals who want Universal Basic Income, a Green New Deal, etc.

The absolutist MMTer with a political axe to grind will argue that the government has a moral duty to spend money until all economic capacity in an economy is being utilised, and it’s only then when inflation will arise in any meaningful way, at which point the government should drain money out of the economy through taxes to reduce that inflation.

If there was a year where such an idea could really take off, it’s 2020. And it would make those £6.90 pints I was talking about yesterday spread throughout the UK a hell of a lot faster…

And on that subject, a reader writes in with tales of a golden age in pub expenditure…

I came to Stoke on Trent in 1972 having been told to leave Uganda and started studying for accountancy at North Staffs Polytechnic (wonderful teachers and setting— all now spoilt as reclassified as Uni).

As money was very tight I supplement by working in local pubs but Friday night was traditionally our students ‘night on the town’ where we used to hire a bus to go to lovely country pubs ( where only one person was behind the bar – an old but very astute land lady would change barrels going down the steep steps into a cellar) then serve us Marston’s Pedigree Pint at a price of 13 pence each; £1 in the pocket used to get you nearly 8 pints & so after a few (late night though as we had guys with guitars for a real sing song ), she used to order good quality large cod & chips & mushy peas all for 29 pence — so all told 4 pints & best fish & chips would only cost 81 pence — leaving 19 p change for another pint and a half.

Those were the good old days but sadly none of this can take place any more as most people go to a bar playing on their stupid iPhones instead of having a good old sing song and nice evening out finishing with traditional Friday treat of fish & chips wrapped in yesterday’s old newspapers (no one reads paper copies anymore!).

On the topic of monetary debasement, if you want to inflation-proof your subscriptions to our research here at Southbank Investment Research, we have a solution: become one of our elite Platinum members. Make a one-off payment now, and you’ll never have to deal with rising subscription prices, because you have lifetime membership. We only open membership to Platinum every now and then, and whenever we do it’s at a higher price – click here to learn more about access to our most exclusive service.

Now if you’ll excuse me, I’m gonna see if I can source a pint of Marston’s Pedigree at a pub near me.

Until tomorrow… “That’s all folks!”