The Bursting Banks of Britain

The Bursting Banks of Britain

THE PALACE HOTEL, DERBYSHIRE – “Don’t ever remember three straight days of torrential rain – the canal is an inch from bursting its banks.”

I like a bit of rain (you learn to in Aberdeen), so I’ve been quite enjoying the last few “days of downpour” we’ve been having. It adds atmosphere, and reassures those in lockdown that at least they’re not missing any good weather.

But for a fella I know who lives out on a narrowboat with his wife, rain is an altogether more intense experience – a trader might call it “leveraged exposure”. The heavy rains of the past several days have raised the water level of the canal by over a foot, and it’s now effectively level with the bank.

Rainfall generally isn’t a problem on the canal, and provided you’re moored in the right place, the rise in the water shouldn’t affect you too much. But he’s already seen a large Dutch barge become unmoored as a result of the rain (the mooring pins loosened after becoming submerged), and I wonder how much trouble it’ll cause if it continues. With enough rainfall they might need an anchor, or risk drifting into areas where no canal yet exists…

On the subject of bursting banks, I received an email from a reader a little while ago that I wanted to address in this letter.

I noticed today and don’t know if you have any comments, that while the Markets climbed (soared in the US record highs) in the UK …. Hsbc/Nwg/Lloy/Barc/Stan all finished lower on the day and are near price lows. My gut feeling (being Old school) is to scream Panic. I can’t buy anymore silver and gold, coz my wife says we can’t eat it…. but seriously if the Banks (forgetting about the Spanish/Italian ones) then isn’t this a leading indicator the Financial system is close to a collapse?

I don’t fault any reader for owning some of the shiny stuff in these trying times. I bought some more just the other day. The monetary metals are a form of insurance, and a reassurance against the grand government interference in money itself which we’re destined to encounter in the future – maybe soon.

The reader’s wife has a point though – be careful you don’t go overboard, especially with something as volatile as silver…

But let’s move on to the banks, where we see a very interesting scenario playing out. First off, here’s the Bloomberg World Banks index, to give us a global view of how bank stocks are performing: 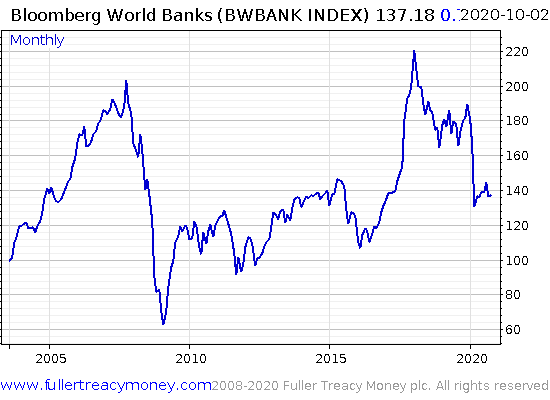 As you can see, they’ve caught the WuFlu, but it ain’t as bad as ‘08. It doesn’t look like investors are as bearish on the banks as in 2016, when the index dipped even lower.

Looking a little closer to home, let’s take another look at one of my favourite charts – the eurozone banks index: 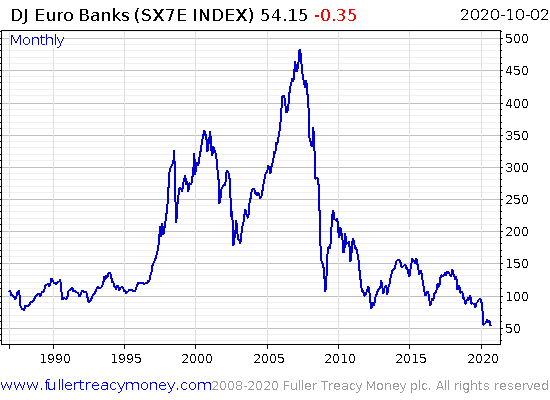 Whenever it looks like it can’t go any lower it does, falling over 50% between February and April this year before bouncing a little. There’s definitely trouble over there…

They were looking better in the depths of the financial crisis than they are now: 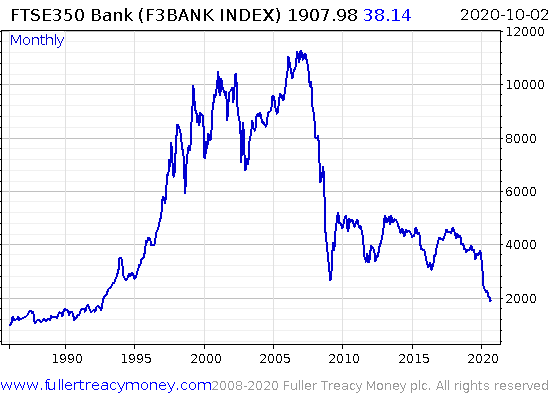 It is worrying indeed to see the UK bank stocks getting this badly wrecked by the market. Why are these titans of the British banking industry falling back to the levels they were at in the early 90s?

It’s that break lower, past the level hit in the financial crisis, that worries me. What do investors see, what are they so afraid of, that they spurn British banks more today… than they did when Northern Rock was going under and the news was full of customers queuing around the block to get their money out of it?

The banks are obviously under a huge amount of pressure from loan defaults sparked by WuFlu – but so are banks everywhere, and the government has begun guaranteeing bank lending as part of the “bounce back” programme. I think what’s begun to plague these stocks is something deeper, more insidious. I think it’s the fear of negative interest rates.

We’ve explored how negative rates have become increasingly present in the government bond market this year (see: We’re seven years below the waterline – 22 September). And the longer that distortion exists, the more it spreads, the likelier we’ll see negative rates enter UK bank lending itself. This what’s happened in the eurozone, and is one of the reasons why that chart of their banks is so grim. Let’s hope that doesn’t happen here, but be prepared for if it does…

PS On a lighter note, I enjoyed this response from a reader to Thursday’s letter, Jump over the moon to me:

Close to where I live, there is a footbridge over the M3, on which you can stand and watch the traffic go by.

This, of course, was an allusion to Tom Peters’ book, ‘In Search of Excellence’, which the bosses of these companies wished everyone to know they’d read.

If you stand on that same bridge today, you won’t see any such slogan.

Trouble was, they weren’t excellent – and still aren’t.

I wouldn’t give too much credence to buzzwords that become shibboleths.

Point taken. But I wonder how long it’ll take for “visionary” to go the way of “excellence”…