ABERDEEN, SCOTLAND – A reader writes in:

I read your posts and you are often on the mark – thank you! I wonder if you have written about Tesla. To me this appears to be the greatest bubble of them all. Am I missing something?

Y’know, whenever I see a chart of Tesla, I ask myself the same question.

I have indeed written about the company in the past. The share performed some extraordinary feats last year – amid in an already extraordinary market – which were simply too extreme to ignore…

While the stock was already the feature of massive debate and speculation before 2020 began, its true “Looney Tunes” era began after the March crash when it plummeted and then restored itself like Wile E Coyote.

By June, I thought the largest explosions from this particular episode had already passed, and printed this chart in my daily note (Is Robinhood really stealing from the rich, to give to the poor?).

Just one month later however, and it was clear this bumper episode was not yet over, and roadrunner was only accelerating (The Looney Tunes episode of a lifetime – 14 July)…

And now, with the company’s CEO Wile E. Musk since having become the richest man in the world (on paper at least), this episode seems a long way from over. 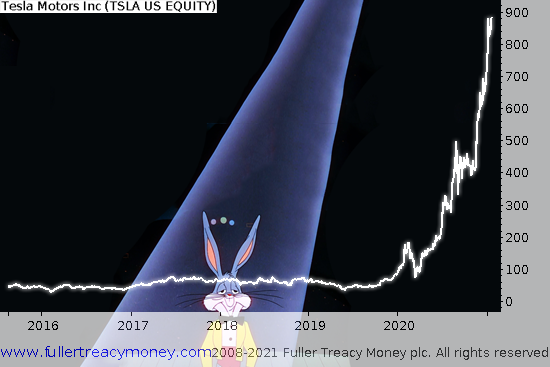 I’m reminded of a time when I was seven, when a kids TV channel called Boomerang played Looney Tunes for 24hrs straight (in tribute to the then-recently deceased Chuck Jones).

Note the prices on the right have changed: the company performed a five-to-one stock split in August to reduce the price of individual shares (and make them more affordable to smaller investors) – not that it seems to have been very successful. It should also be noted that Tesla has become so large that since December it’s now included in the S&P 500 index, which means its price will now be supported by all the passive investment cash which gets poured into the market to track that index.

A couple of years ago – if memory serves, it would’ve been around Christmas 2018 – my colleague Eoin Treacy made the argument that if we saw a stockmarket melt-up, Tesla would be the stock to own, despite its already high valuation. Looking back, he certainly seems to have been right. But melt-ups normally end in tears, and you don’t want to be left holding the crowning asset once the fun is over.

(A colleague promptly took this argument and clothed it in a grim metaphor – that Tesla will be remembered as ending this bull market the same way Charles Manson is remembered for ending the 1960s.)

Tesla has been called a bubble, a cult, a fraud for so long and by so many in the investment community – and yet Musk continues to confound his detractors (and bankrupt his shortsellers). Why? And how?

He is clearly an incredibly gifted individual: charismatic, intelligent, and a great salesman, forever able to sell investors and the public his vision of the future. He has succeeded in making electric vehicles sexy, and thus pushing the entire car industry in the direction of electrification. He has had great success in commercial space flight with SpaceX. He is able to please the likes of US politicians and the Chinese Communist Party at the same time, and has the uncanny Trump-like ability to shrug off controversies.

These are great talents indeed, no doubt about it. But does that accurately explain the performance of this stock? Is it as straightforward as that? I can’t shake the feeling that I’m missing something.

Could this be the greatest bubble of them all, as this reader suggests? If the bull market in tech gets clobbered, I’d certainly expect $TSLA to be leading the fall downstairs – but that doesn’t necessarily mean it’s a massive bubble, just (another) company with a “heroic” valuation.

The stock may be a classic bubble. But the problem with the bubble definition is that it’s hard to prove. There are so many incredibly highly priced financial assets now, that Tesla’s outperformance can be explained away as just a better asset than the others, rather than a frothing, inflating balloon that will inevitably burst.

I’d love to know your thoughts on the matter. Is Tesla just one massive bubble, or is Wile E. Musk just the visionary mankind deserves? Or both? Let me know: [email protected].