When the illusion fails to fool

When the illusion fails to fool

ABERDEEN, SCOTLAND – Is it just me, or was that an incredibly long January? Hogmanay feels forever ago (though I’m sure it feels even longer than that for those who braved Dry January).

A month can be an awfully long time in markets, and the past week was especially eventful – The WallStreetBets Affair has gathered significant media coverage and will not be going away anytime soon. I suspect this week will be a long one indeed.

The everyman seeking his fortune in the investment world is a great thing to see, and should be encouraged. But when the everyman is arriving en masse, expecting a fast fortune, and the press is writing all about it… that’s generally time to be cautious, to take some profits, increase your cash holdings, and to prepare for a bear market.

Thing is, when this phenomenon has been seen in the past – during the final phase of the dotcom boom for example – this occurred at the end of an economic expansion, and the crash arrived when central banks started hiking interest rates. Here we are now, waiting on the economic revival of the world with the end of lockdowns, and there isn’t an interest rate in sight, not here or in the future.

If this is how manic things are now, what’s the stock market gonna do when the world opens up again and we actually start seeing some decent economic figures?

The stock market could simply run out of momentum on its own and collapse as the world comes to life of course. If the stock market doesn’t reflect the economy in lockdown, why should it reflect its renewal?

But I wonder if this boom in speculation is here to stay: a market force we’ll see a lot more of in the years to come. The comparison to the roaring speculative manias of the 1920s – preceded by the Spanish flu – remains compelling…

On the topic of stocks loved by the everyman, I asked you last week what you made of Tesla (Wile E. Musk – 28 January). Thanks to all who wrote in. With really just one exception (which we’ll explore tomorrow), most of the responses I received were negative on the company – and the cars themselves for that matter.

I’d like to share a few of your letters, and show you what some of the rest of the readership think of this company, which has come to dominate markets, headlines, and the imagination.

… if you follow the old adage the market can remain irrational longer that you can remain solvent… Tesla has proved this very point, with the demise of the short sellers who have been burnt to a crisp.

Is there value in the company? I would argue some but not enough to support this share price. Do Tesla own some form of intellectual property? Some massive breakthrough in propulsion systems, battery technology, or scientific advances, could this be the unknown value of Tesla not now but having the future priced into its stock?

I think that the problem is that anyone who owns Tesla stock is evaluating what it is worth, if to sell and bank a profit or wait for it to inflate higher. Will it crash and burn or will it make new heights via unveiling a new product.

As an example look at Apple iPhones, just a little twist each year and they have people queuing around the block in all weathers to buy the latest offering its shares have not crashed and burned one might argue their business is brisk.

Tesla like Apple have put twists on their products last year Tesla launched a new S.U.V version, whilst still not fulfilling their product target for the previous model, there have been articles relating to production problems, difficulties in building Tesla vehicles.

If Tesla is a bubble, it is very big. Whilst in this new age of investment value means nothing, assets have no use whilst large debts and share buybacks are in vogue, along with I.P.O money-raising for… a business model on paper [where it’s] unknown if that model will work in reality. Therefore in my opinion the rise of Tesla is a sign of the times, whilst a useful product is the last thing to worry about. If you invest in the momentum of a stock and not its value of its production then surely in time you must get burnt when the illusion fails to fool.

The value of car companies, divided by the number of cars they sell, is a good back-of-the-envelope measure of how richly valued that company is. And as one reader illustrates, these Teslas are mightily valued indeed…

Sure there is some growth priced in plus EV is sexy right now and in trend. But surely this is an indicator of a Tesla bubble?

One would hope that a manufacturer so highly valued would take good care of their product, but as another reader writes:

Just read this morning the Which magazine and, where a good car can expect a rating of 70 to 80 per cent, the Tesla electric car was rated at 45 per cent. It wasn’t anything to do with the electric engine, it seems that most other things on the car are unreliable, like the electric wiring etc. If that is true, and I have no doubt that Which will have done their assessment accurately, Tesla is going nowhere.

$TSLA bears have often highlighted faulty build quality in the cars themselves – attributed to corner cutting. But the share price has certainly been going somewhere…

It’ll be interesting to see if the increasing production of electric vehicles from the legacy vehicle manufacturers does anything to tarnish Tesla’s brand. It hasn’t yet – despite electric Porsches, Nissans, Astons, and BMWs – but as James Allen and Kit Winder keep saying, it’s early days for the EV revolution.

And before I leave you for today, I very much enjoyed the spirit of this response:

Tesla is a product of these crazy times. There are hundreds of bubbles everywhere. So nobody worries, It’s normal. The whole market is a bubble. The massive manipulation of Fiat money by Central banks and Governments could not make it any other way. But as night follows day, Mr Market is waiting to climb on his horse to join the other 3 Horsemen in waiting on the battlefield of the Financial Apocalypse… I haven’t got a clue what happens next but you would have to pay me to put Tesla in my portfolio at these prices (Not really, but you get my gist…).

An allocation to Tesla is too rich for my blood right now, that’s for sure.

But on the topic of Mr Market on his horse… last week he began to cry “Hi-Yo Silver, away!” 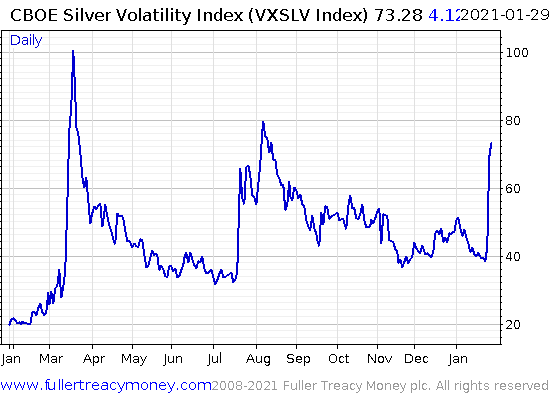 Over the weekend there’s been a lot of chatter from the likes of WallStreetBets about causing a squeeze on the silver price, which has caused a lot of excitement (just check #silversqueeze on Twitter). But that spike began on 27 January – Wednesday last week – which makes me think something else could be going on.

It’s gonna be a long week.

PS I spoke to my colleague Sam Volkering about the WallStreetBets affair (and the recent surge in silver interest) yesterday evening on our weekly Booze, Booms & Busts podcast – if these topics are up your street, you can listen to it here.