Tsunami in a spyglass

Tsunami in a spyglass

THE KINGS ARMS, STAFFORDSHIRE – “Whenever I tweet, some call it a tirade. Totally dishonest!”

To some, it is a tirade. To others it is a lullaby, a constant reassurance that a man who knows their plight resides somewhere in the catacombs of DC.

Whatever its nature, The Donald’s stream-of-consciousness broadcast via Twitter is intensifying. As we head into the election, the volume of Tweets emanating from Trump’s account is reaching a crescendo…

I meant to show you this chart last week, but didn’t get around to it during The Big Poll. The is the rolling daily average of Trump’s tweets in blue, and including retweets in white: 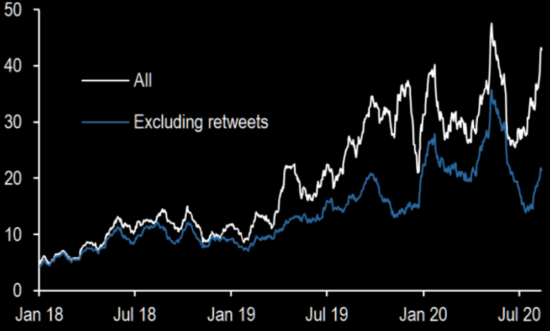 We’ve explored Trumps creative use of Twitter to bypass the media in this letter before (WHERE ARE THE CENTRAL BANKS?! – 22 August 2019). It’s hard to conjure dozens of original tweets of your own every day, let alone in such a persuasive style while doing “the most important job in the world” etc. The man is clearly a talented content creator, expressing a gift you’d normally find in millennials and the even younger “zoomer” generations who are native to the internet.

It’s only four weeks now until the US election (2020 really is flying by). No doubt he’ll be going “all-out” on Twitter as we approach 3 November…

NOTE: I wrote today’s letter prior to The Donald’s announcement on Twitter this morning that both he and the First Lady have contracted the WuFlu. For what it’s worth, I still expect his tweeting to intensify. (And if Trump has it now… could he have given it to Biden at the debate..?)

But how important actually is the election to investors?

The financial press is rich with speculation on how a re-elected Trump or newly elected Biden administration would affect the stockmarket. Wells Fargo even went on CNBC recently and pitched a portfolio to profit from either scenario: 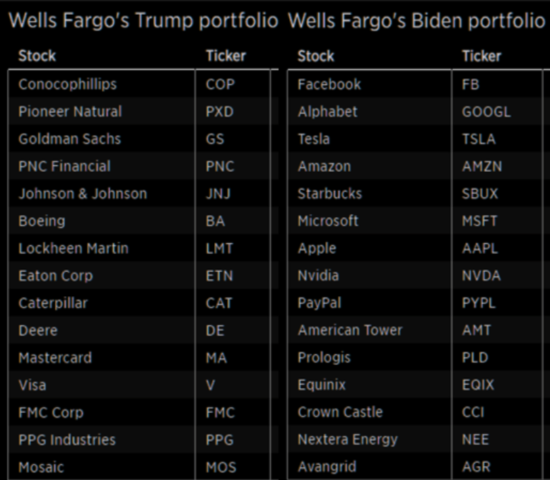 I assume that’s a typo on Lockheed. But “n” and “d” aren’t close on a keyboard…
Source: CNBC/The Market Ear

When you look through the pages of history, the stockmarket doesn’t seem to mind that much if it’s the red elephant Republicans or the blue donkey Democrats who are dominating Washington DC. In fact, it’s when the government is divided that US stocks have flourished the most! 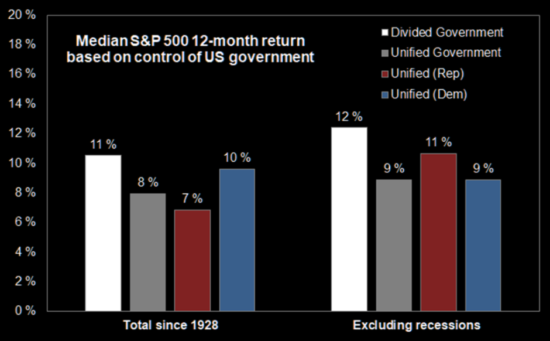 It’s when the US government has been divided and constrained that the greatest increases in stockmarket wealth have occurred. Our resident anarchist Nickolai Hubble likes to point out that there’s a lesson in there…

But that’s a historical average since 1928 – time will have smoothed out a lot of volatility. When you consider what’s at stake in this election is the relationship between the world’s largest and second-largest economies, the consequences will be huge for companies with skin in that relationship. The course of the Second Cold War will be shifted come November, and this is not to be taken lightly by investors or anyone else for that matter.

For certain market participants, the election is being priced as one of the riskiest events in history. I’m not exaggerating there – as we explored this topic a month ago (Chaos is the new cool – 2 September), the volatility market has rarely been so bent out of shape in anticipation of a future event.

The financial asset in question, the VIX future that matures in November, has rarely been so expensive compared to the futures that mature the month before and the month after it.

This a good chart showing how exceptional this is compared to previous elections: 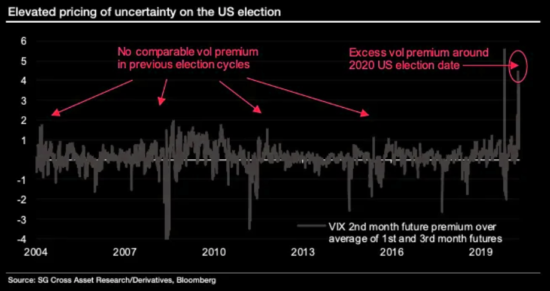 This futures contract has become so pricey because investors are buying it as insurance: they want a payout in the event volatility explodes in November, to offset any losses this would cause to their main portfolio.

For investors believing the US election is being overhyped and is actually not a very big deal, this is a massive opportunity to enter the market and begin selling that futures contract. If they’re correct in their anticipation that volatility will be much lower in November, they will collect a fat payment now, and then have to pay a much smaller sum to the buyer of the future when it matures. But the elevated price would suggest that few people want to do that, for one reason or another.

I have a theory for why there’s this crazy spike in the volatility market around November. All this volatility malarkey is based on the options market. The VIX index, while used as a measure of stockmarket volatility, is actually calculated using the volatility of stock-option prices.

And as we explored in Flying to nowhere (16 September), there has been a gigantic explosion in the use of options as investors move into ever-riskier strategies too. Huge amounts of cash have flooded into these derivatives as investors try to extract returns while the economy is in lockdown and interest rates have gone ever lower.

I think it’s this increased use of options which is distorting the markets perception of the election. I reckon this flood of new cash is effectively “raising the water level” of the volatility market, and thus making future anticipated “waves” much taller. We’ll find out in November if this is a mirage, or actually a tsunami approaching in plain sight…

PS And when you’ve a spare moment this weekend…

Why did the Tokyo stock exchange suddenly fail this week? Foul-play, or technical error? Sam Volkering and Kit Winder examine the clues in this week’s Exponential Investor podcast.