THE ROYAL OAK, STAFFORDSHIRE – “Are they going to the Bermuda Triangle?”

“Bitchcraft”, a (presumably) pseudonymous Twitter user in Brazil, asks a fair question. With a chart like this, you have to wonder exactly where Singapore Airlines is flying people to: 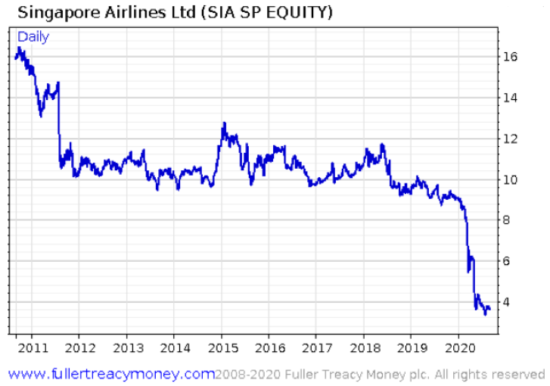 The truth of the matter is even more mysterious. Turns out, given the lack of airline travel and countries willing to accept foreign visitors, Singapore Airlines is actually planning on taking passengers aboard its aircraft… and then flying them nowhere.

All the fuss of air travel without actually going anywhere?

Airlines are hoping that the peculiar concept has some appeal for passengers desperate to satisfy their wanderlust while grappling with coronavirus limitations.

They’re called “no-destination” flights, an idea that comes as airlines entertain ways to boost cash flow amid a severe slump in passenger demand caused by the pandemic.

Singapore Airlines C6L, for example, is considering launching a “flight to nowhere” from Changi Airport, starting in October. Basically, the passengers will board the plane, fly around for a few hours, and come back — a quirky round-trip that could also include staycations at the city’s hotels and limousine ferry rides…

Perhaps I’ll finally be able to fly business class after all. Then again, considering the issues airlines are facing, maybe there won’t be any discounts on a flight to nowhere…

The concept of “no-destination flights” brings to mind the “broken window” approach to economics, where keeping people employed and the economy ticking over is paramount, even if that means just committing wanton acts of vandalism for people to fix. (“Keynes smiles from above” remarks market commentator Jared Dillian on the story.)

But I’ve been told that British Airways ran similar “champagne” flights to nowhere back in the 80s, when flying itself was much more of a luxury. Considering the longing some folks have for flying, maybe we’re just seeing a repeat – as the article continues:

Meanwhile, “plane-themed” cafes are springing up in Thailand, allowing consumers to drink coffee on old airplanes without actually going anywhere.

According to Newsflare, customer Sara Chen, 25, said the cafe felt like she was inside a real plane—taking pictures to post on Instagram,  where people believed she was in midair. “I closed my eyes and imagined I was really in the sky,’’ she said.

Maybe we’ll such cafés crop up here in the UK, run by the green crowd to wean people off flying (subsidised by Her Majesty’s Government of course). After all, there’s no shortage of Boeing 737 MAXs out there, and they’ll have to do something with ‘em.

I have a café name suggestion – Frequent Flyer’s Methodone – but it’s a bit wordy. Any others? [email protected].

On a more serious note, the theme of flying to nowhere is becoming increasingly more evident to investors. With the golden goose of the economy effectively frozen during the lockdowns, those needing dividends or interest have had to get even more inventive in their pursuit of returns.

After all, while we often forget it when gazing into stock indexes and asset prices, the real economy is in fact vital to providing new cash to the market. And it’s hard to pay back debts or dividends when the government is preventing you from doing anything.

This absence of money from the “real world” flowing into stock and debt markets has pushed investors ever further into the world of options derivatives: paper contracts that give you the right to buy or sell stocks in the future at a price predetermined today.

Effectively, this has just driven investors much further into the game of speculation. The economic pie is not getting any bigger, they’re just engaged in more gambling on how the future will turn out. It’s a flight to nowhere – but an incredibly wild one.

Before I get to the charts, let me just clarify something for readers not familiar with the space. If you buy a call option, it gives you the right – for a certain period of time – to “call” upon the person who created it, and make them sell you an asset (like a stock) at a price you determined back when you bought the option.

In short, if you buy a call option on a stock, and the stock price then goes up, your call option is worth more money. In some cases, a huge amount more. The leverage it grants the holder is what makes them so attractive/addictive to those who trade them.

That attraction/addiction went nuclear this year. This is the daily traded interest in call options on individual stocks:

Much of the speculation in call options was directed at – surprise, surprise – tech stocks. When tech got hit hard a couple weeks back, those owning calls took a serious beating, something Charlie Morris described yesterday at The Fleet Street Letter Wealth Builder:

One thing that never changes is that something interesting happens whenever I take a holiday. Two weeks ago, the almighty tech stocks cracked, with Tesla (TSLA) leading the way down. Then Zero Hedge (not the FT as claimed by the FT) identified Japan’s SoftBank as being an unusually large participant in the options market for the leading tech stocks where volumes were off the charts.
Various tech stocks had more options traded than their underlying stock; something that only happens when expectations are beyond the ridiculous. I can only assume that SoftBank’s money is lost. No problem, it wasn’t SoftBank’s anyway, it belonged to various sovereign wealth funds in the Middle East. This is the sort of madness that you would associate with a mania. Big, crazy, dumb money chasing a dream.

Despite tech taking a whacking a couple weeks back, if that vertical line on the chart above is to be trusted, there’s still some big, crazy money chasing a big, crazy dream. “If at first you don’t succeed…”

The increasing interest in options to make money in a WuFlu-afflicted world brings with it increasingly extreme volatility. 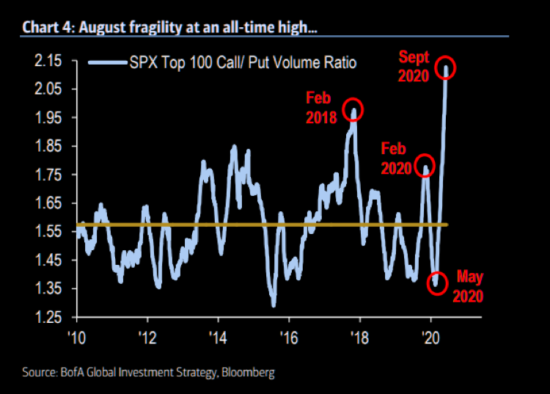 This may be a flight to nowhere, but it’s taking a particularly… “scenic”… route on the way there.

For a more colourful illustration of the flightpath, I’ll refer you to a certain six-year old pilot, and leave you for today.

That’s a Buffett quote and a half. Kit Winder put that in yesterday’s Exponential Investor, where he explored why one of the richest men in the men in the world is building his ark in Japan… with gold. Click here to read it.