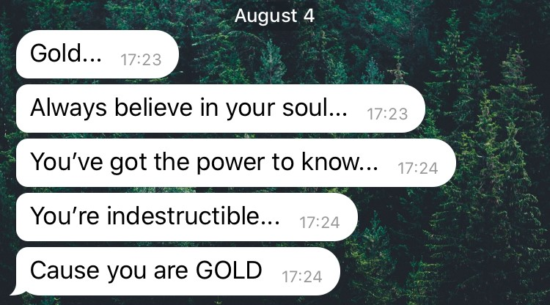 I must confess dear reader, I had not heard of the band named Spandau Ballet until this week.

It was only after I received the rather… cryptic series of texts above that I discovered the group and its 1983 hit single Gold (ironically, the track “only” won a silver Brit Award at the time). I’m afraid I can’t offer much of an excuse for my ignorance, except that I’m young.

The musical messages came from a friend of mine, who became captivated by the yellow metal early last year. I like to think I can take some credit for his interest, which has since blossomed into a passion.

He would come to me often with questions about gold. He wanted to know what makes it so special, why its shine has seduced humans for millennia and why it divides investors so strongly today.

He would devour my reading suggestions, and then ask me if I had any others. He would take all my answers and then come back with more questions soon after. He wanted to know market structure, central bank holdings, mining operations…

In short, he caught the “gold bug”. Before long he was buying a load of bullion. And now, it’s paying off for him.

His silent musical rendition via text was triggered by gold hitting the $2,000 mark for the first time in history on Monday evening.

It’s not just the price which is breaking records either, but its sustained upward trajectory. As SentimenTrader, a market analysis firm, remarked yesterday on its Twitter feed: “Gold has rallied for 13 out of 14 days. That has happened never times before.”

The yellow heavy stuff is getting so hot I’m beginning to get cautious. There’s gonna be a pullback here, a shakeout to test the newcomers. And there have been many newcomers indeed over the last few weeks – many of them quite young.

Last month I said shares in gold and silver funds will become the most popular investments on the Robinhood trading platform when this precious metals bull market really gets going: No hooded saviour?.

Robinhood is focused on millennial investors – folks my age who’ve never heard of Spandau Ballet. I think interest from these folks is an important indicator of just how aware the investment community as a whole is aware of precious metals, as they’re often categorised as the preserve of the old and cautious investors. When gold and silver start getting support from “da yoof”, you’ll know that the space is in the market’s spotlight.

While the largest exchange-traded funds for gold and silver ($GLD and $SLV respectively) are still a long way from the most popular investments on the platform, interest from the kids is certainly on the up.

It was on 23 July that we published that piece. $GLD was the 252nd most popular share on the platform at the time.

11,000 new owners of the share have boosted $GLD to become the 195th most popular share on the Robinhood app. It’s a fair way off number spot yet, but we’re 57 rungs higher.

And that’s just Robinhood. Much larger flows of cash have entered that fund from other investors. The fund has had to buy so much gold with this cash, that its gold holdings are now significantly larger than those of many governments and central banks.

This is from the Financial Times, yesterday:

An exchange traded fund has become one of the world’s biggest owners of gold, surpassing even the central banks of Japan and India, as investors have scrambled to buy the precious metal and pushed it to record highs.

SPDR Gold Shares, an ETF that owns physical bullion rather than just financial derivatives, has hoovered up gold this year as investors seeking price gains or a haven asset channel more money into the fund.

The size of the fund’s holdings — which are held in HSBC’s London vaults — has climbed to 1,258 tonnes. On Monday and Tuesday alone it added another 15 tonnes, roughly five times as much as Michael Caine’s bank robbers lifted in The Italian Job, based on the $4m value of the gold taken in the 1969 film…

The size of the fund — known by its ticker GLD — puts it among the ranks of major central banks. Its holdings are equal to a quarter of all the gold held at Fort Knox in the US, more than the gold reserves of the Bank of Japan, the Bank of England or the Reserve Bank of India, and not far from China’s 1,948 tonnes of the precious metal, according to data from the [World Gold Council]…

Gold is getting seriously popular, seriously fast. I reckon there’ll be a bump on the road in the near future, a drop in the price which will shake out some of the new owners. Markets don’t go in one direction forever – but they do trend. And in my eyes, gold’s road to celebrity is assured.

Tomorrow, we’ll take a look at the “the other precious metal” which is angling just as hard for fame, after years in the gutter: silver.

PS For more on how investors’ obsession with gold is both driving its price and creating a gigantic treasure hoard in the centre of London, take a look at this letter of Capital & Conflict from earlier in the year: Saddam and Smaug: golden hoards.