“Gold. Gold beyond measure, beyond sorrow and grief… Behold, the great treasure hoard of Thrór! the global ETF market!”

– The Hobbit: The Battle of the Five Armies (2014, script slightly altered) 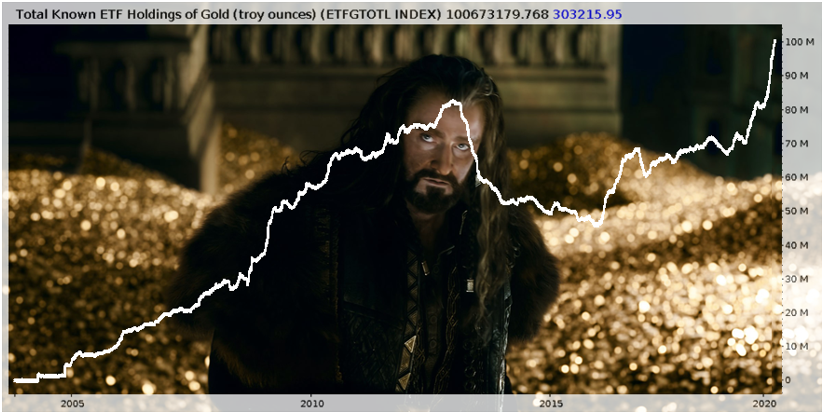 I wasn’t a big fan of the The Hobbit trilogy of films: they were a cash grab, and it showed. More than nine and a half hours of film were squeezed out of a single book only a few hundred pages long, which meant a lot of filler had to be stuffed into the script.

But – and this likely won’t surprise you – I did really like the scenes of Smaug’s colossal gold hoard, rendered beautifully in CGI. The total quantity of gold ever mined on Earth is often measured in Olympic swimming pools, with the total amount able to fill less than four of them. But with the magic of computer-generated imagery, many more swimming pools of gold than man has ever mined could populate the den of Smaug. It looked terrific, especially if you’ve a fascination with the investment properties of the yellow metal.

Maybe the closest you could get to the image of Thorin Oakenshield flexing over Smaug’s hoard of gold would be those of US soldiers posing with the caches of Saddam’s gold they discovered soon after their invasion of Iraq in 2003. The hoard is not nearly so impressive, but the tale is a hell of a lot darker. 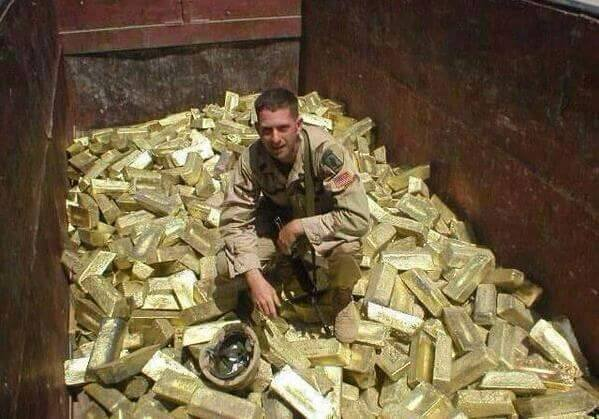 But there’s another global gold hoard out there, being piled up faster than it ever has before: it’s the total gold holdings of exchange-traded funds (ETFs) in the world.

As you can see from that first chart, the hoard of gold these funds sit on has reached an all-time high.

However, that chart isn’t totally up to date – with the last couple months’ data, it’d look a lot steeper. In fact, ETFs have bought more gold in this year than they have in any other year on record – and we’re only halfway through!

A total of 623 tonnes has been added to the ETF hoard so far this year, beating the previous record of 591 tonnes added over the course of 2009, when investors shell-shocked from the financial crisis were grasping for something real they could trust.

Some people don’t trust the ETFs however – and in general I support the ownership of physical bullion kept in a safe space somewhere over ETF holdings. The whole point of gold is that it has no counterparty risk, and an ETF manager is of course a counterparty who could default on their obligations. However, the global ETF hoard is worth paying attention to even if you don’t trust or bother with the ETFs, as it shows you just how much demand for the yellow stuff there is out there from investors.

My colleague Charlie Morris over at The Fleet Street Letter Monthly Alert goes a step further, and believes the growing of the ETF hoard is key to higher gold prices in the future – a much larger hoard forms one of the foundations of his bull case for the shiny stuff. That record increase of the gold ETF hoard in 2009, restricting gold supply elsewhere, will definitely have helped fan the flames on the bull market in gold that followed, climaxing in 2011.

But here we are, halfway through 2020 and we’ve already beaten 2009 when it comes to gold demand. We’re getting as close to Smaug’s hoard without CGI as we can get…