No Robin Hood… but there’s Merry Men in this market

No Robin Hood… but there’s Merry Men in this market 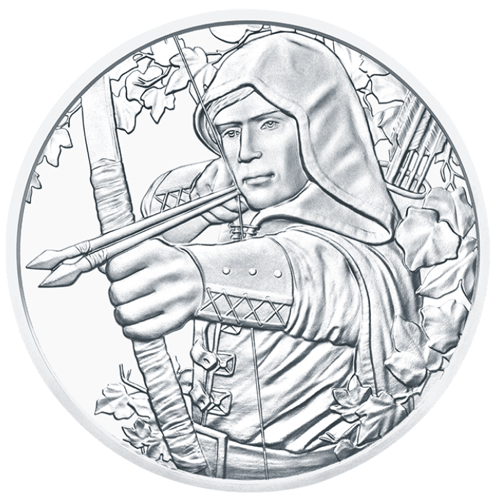 I’ve speculated a couple of times in this letter what might happen to the British stockmarket if Robinhood, the commission-free stock trading app, came to the UK. The trading platform, notorious for its popularity amongst youngsters, has contributed to some of the wild market action in the States which we’ve seen in recent months – despite the relatively small amount of cash it’s injected into the market.

This is partly because its young clients have sky-high risk tolerance (or they don’t know what they’re doing) who have been happy to pile into stocks that are illiquid (ie, not regularly bought and sold in large quantities by market participants), creating spectacular rises in price.

Robinhood was scheduled to arrive in the UK shortly, which made me wonder about the kind of craziness this could inject into UK stocks when the company’s strong advertising budget starts getting kids into trading. Small companies on the AIM exchange could go wild, I thought.

But sadly we’ll not be able to find out, at least not in the near term. Robinhood’s management has indefinitely postponed opening the platform to UK residents.

The closest you can get to Robinhood in the market these days is buying the silver bullion printed above. I got a few of those silver rounds a while back – why the Austrian Mint decided to start hammering silver with an image of a British folk hero I don’t know, but it got a good artist to make the image and the rounds are available in the UK so I ain’t complaining.

Silver and its big brother gold had another great day yesterday. And while the Robinhood app is not on our shores, we can still see what users of the platform are buying. We’re a way off gold and silver becoming darlings of the app, but holding precious metals investments is certainly becoming more fashionable.

$GLD, the largest gold exchange-traded fund, is currently the 252nd most popular investment on the platform. The price is here in pink, and the number of accounts holding it is in green:

Price of GLD shares on the left-hand side, number of users holding it on the right
Source: robintrack.net

Silver is always more volatile than gold in price and fittingly, its ownership is similarly more sudden. It’s the 327th most popular investment on the Robinhood app, price in pink and user ownership in green as before:

Price of SLV shares on the left-hand side, number of users holding it on the right
Source: robintrack.net

The kids are slowly getting the gold and silver “bug”, but we’ve a long way to go yet. When this bull run is done, I reckon we’ll see both of these (or similar precious metal-based ETFs) in the top ten holdings.

The implied volatility of gold – people betting on the future price of gold with options derivatives – has recently begun spiking up. When “implied vol” like this spikes up for stocks, that’s normally a bad sign for their price – uncertainty has arisen somehow, and this is generally bad for market prices. But interestingly gold volatility often increases while the gold price is going up. Not always of course – in March, the vol spike led to a gold crash – but often enough to notice on a two-year chart. That’s the gold price in green, with the implied volatility in blue: 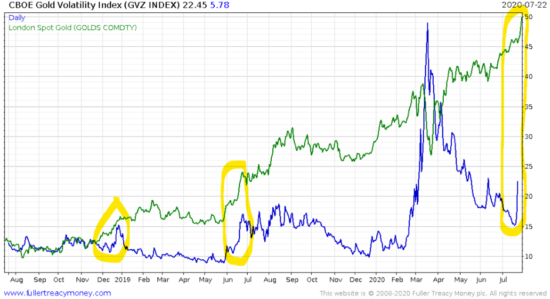 I can’t adequately explain why “voldatility” behaves like this. Perhaps whenever the gold price has a decent spike up, the market thinks it might be the beginning of “The Big One”, and gets ahead of itself trying to hedge against it. Unlike stocks, gold is not the creation of man, and yet is still highly valued, which gives it a mystery and allure which stocks don’t have – something that’s hard to put a finger on, let alone a price.

If this gold bull market has legs, which I believe it does, then it’ll be interesting to see if volatility increases or levels out during it…

We don’t manage money here at Southbank Investment Research, and I doubt we ever will. But our purpose is to empower you to make winning decisions with your money, with you as the asset manager at the helm. Through the internet it’s pretty easy for us to conduct our business, just as it is for those other companies which have grown huge without much actual infrastructure. We’re not a fund management house with all of the overhead costs and custody issues that mainstream financial firms have to deal with.

I was thinking about this when Kit Winder was comparing the performance of the Exponential Energy Fortunes portfolio to those of the top performing investment funds out there, now that the official “scoreboard” has been published. And comparing the work of James Allen at Exponential Energy Fortunes to the mainstream fund management industry has led to some pretty extraordinary results. I’ll let Kit explain, using classic cricket metaphors as he commonly does:

After crunching the numbers on James’ portfolio, rebasing all stocks to 1 January prices and averaging the positions based on an equal weighting in the portfolio, something remarkable came out.

Initially, as I went through on alphabetical order, I was thinking to myself, “This was silly Kit, of course James hasn’t outperformed the best funds UK investors can buy. That’s crazy talk.”

But then I got into what you might call the alphabet’s strong “middle order”.

Which left the Exponential Energy Fortunes portfolio with an overall gain of 104%. This year.

Now the transmission of recommendations isn’t perfect; not every subscriber will get in or out of every position at the same price, so there probably aren’t many who got exactly that return.

But in a year which saw the fastest ever bear market, in which most global indices are still down 20% or more from their peaks in February, and in which the traditional energy sector has taken a beating for the ages, this is a remarkable feat…

Subscribers to Exponential Energy Fortunes have been making off with loot that Robin of Sherwood would be proud of. And similarly, during a period of government largesse..!

As the Americans like to say, “the scoreboard doesn’t lie”. If you haven’t signed up to next week’s event where Kit and James will be discussing the loot they’ll be searching for next in the wild forest of the green energy market, click here.