Silver, which just had its best month in 40 years… has started the current month with its best week in 40 years.

I was planning on showing you a couple of charts today already, but I’m just going to show you the price chart first as the market action has become so extreme. 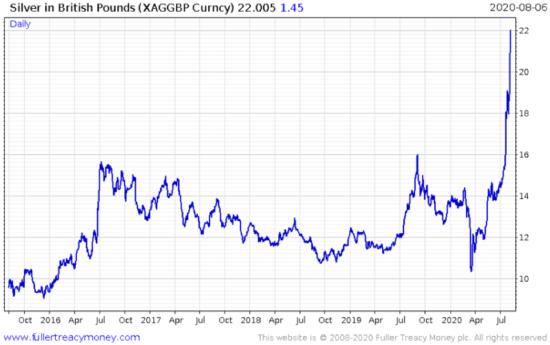 Gold, never so bold, just had its best month in eight years, and is on track to finish its best week in 12 – since the financial crisis. Gold is already flying at all-time-high altitudes though, while silver’s a fair bit off that thus far.

This is the kind of angle and trajectory on a chart that you’re probably used to seeing tech stocks display, or the likes of James Allen’s renewable energy plays over at Exponential Energy Fortunes.

What it isn’t, is something you’d expect to see from a liquid market for an inert metal. An inert metal that’s relatively abundant when you compare it to its older brother, gold.

I remember Charlie Morris, our resident fund manager, describe the silver market as “loose”, meaning you can throw a lot of buying or a lot of selling at it, and generally the price won’t move all that much. (This is as opposed to a “tight” market, where small amounts of buying and selling can move the price significantly – think micro-cap stocks.)

For silver to have moved this much, this fast, means somebody out there must really like silver all of a sudden. Maybe a lot of people – there’s certainly a lot of youngsters joining the crowd, that’s for sure – more on that in a bit.

A chart which I think is even wilder than the one above, albeit slightly more nuanced, is the incredible rise in holdings of silver by exchange-traded funds (ETFs).

This is a metric that avoids price entirely, and simply looks at how much demand there is for the metal from investors who don’t want (or cannot hold) the physical bullion directly.

While of course investors wanting exposure to silver has a lot to do with its price, the silver holdings by these funds illustrate the rate at which these funds are actually buying the physical metal.

And as you can see in the chart below, they’ve been buying a lot… 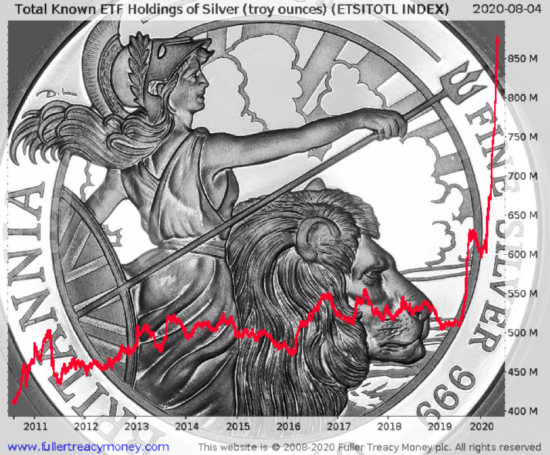 The ETFs are buying lots of silver, because investors are buying a hell of a lot of shares in them.

We predicted back on 23 July (No hooded saviour – click to read again) that the major gold and silver ETFs, the $GLD and $SLV respectively, would become the most popular shares on the millennial investing platform Robinhood as the bull market for previous metals intensifies.

As we noted yesterday, $GLD has jumped more than 50 places up the rankings since then. The $SLV however, has made an even more aggressive move up in celebrity status. It was the 327th most popular share on the platform when we wrote that – but now it’s 101 positions ahead to 226th place. It’s a long way to go yet, but I have faith.

The number of users holding the share since then is up more than 100%, with 18,000 more kids boarding the silver train.

When the price hit £20 earlier in the week, Charlie Morris perked his ears up:

Wow, silver back to the level where I shorted it back in 2013. It was a great moment. Not feeling the need to go there again today. This time the wind is behind it. That said, [it’s] pretty cooked….

As I said yesterday, just how rapid the prices are moving in precious metals makes me think there’s going to be a sharp pullback at some point soon, a shakeout that will rattle the newcomers to the space. It’ll just be a bump in the road to higher prices in future – but it’ll make the newly converted question their beliefs.

For the moment, however, as we head into the weekend, silver is looking very shiny indeed.

PS On the subject of precious metals, you may be interested in what Kit Winder wrote in today’s Exponential Investor. The explosion in Beirut, a tragedy that’s struck an already ravaged economy, may finally be what pushes the government to start selling its vast gold reserves – click here to read his analysis.