The Commodity Capitol and the Great Land of Gold

The Commodity Capitol and the Great Land of Gold

We’ve been writing about inflation this week. About that brutally destructive force, the bane of savers and investors alike, but especially cruel to the poorest in our society.

It’s currently being administered to the everyman in a dose that’s just low enough for him not to complain too much, or to blame its symptoms on something or somebody else.

But through the week, we’ve been examining some of the forces conspiring to bring inflation much higher – like central banks printing while governments spend, or as Russell Napier points to, the co-option of commercial banks by the government to drive money creation at causes deemed politically expedient.

Eras of high inflation are not peaceful times. The social unrest we’ve seen in the last few weeks will be nothing more than a foreshadowing of the chaos to come should inflation return to the levels experienced in the 70s. It almost goes without saying that should this occur, investors holding “the wrong stuff” will get ploughed.

But as I’ve been alluding to all through this week, investors in the UK have a unique advantage for surviving and thriving through inflationary periods. This is a subject we’re fleshing out in this month’s issue of The Fleet Street Letter Monthly Alert with our resident fund manager Charlie Morris. I can’t reveal too much from our issue, but I can tell you what the trick British investors have up their sleeve for surviving inflation.

It’s very close to home, in our own stockmarket no less – but few recognise it as such. But before we get to that bit, you need to grasp the fundamentals of how Charlie looks at stocks in general.

The three kinds of stocks

From Charlie’s perspective there are only ever three kinds of stocks.

Quality is defensive and tends to outperform when interest rates and inflation are low. Being the least sensitive to the economy, these stocks become safe havens during a crisis.

Growth also enjoys low inflation but prefers the economy to be growing.

Value is highly sensitive to the global economy and does best when inflation is rising.

I’ve highlighted type three as it’s the only one of the three which thrives during inflation. And which the FTSE is actually full of…

The FTSE is an inflation hedge?

When looking at different nation’s stockmarkets, it’s easy to glance at the ticker and look no further. Buzzing endlessly at the bottom of various news channels run names like “FTSE”, “DAX”, and “NASDAQ” with a corresponding number that is supposedly indicative of the strength and health of that country’s stockmarket.

On the surface, it’s easy to conclude that some countries are simply performing better than others due to their economies being in better shape. However, in the case of the FTSE, it’s full of companies with operations all over the globe, the value of which isn’t subject to forces that affect the UK economy.

London is a Commodity Capitol unlike no other: some of the largest mining companies in the world are listed there with shares that trade on the London Stock Exchange in pounds and pennies: Rio Tinto, BHP Billiton, Glencore, Anglo American and more. While the Toronto and Australian stock exchanges are popular amongst smaller mining outfits to raise money, London is where the big boys go to find funding, and it’s where many base their headquarters too.

While the health of the British economy does not depend upon the mining industry, for major members of the FTSE it is their bread and butter.

(As an aside, London ain’t a bad place to raise capital for the junior mining outfits too – though not on the FTSE. This is Greatland Gold ($GGP), listed on the AIM, which has surged a blistering 600% so far this year…) 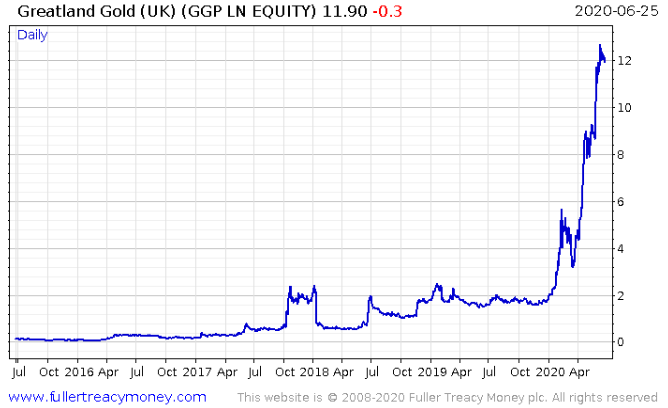 Tying this back to the three types of stocks, the FTSE has a split of 40% Value, 38% Quality and 22% Growth, with the commodity kings falling under the “Value” heading. If inflation breaks out in a big way, that 40% of the FTSE should do well, and help support the index as a whole.

This adds a lot of context to the divergence between the world and the US has had in recent years. The Growth trend (low inflation, but growing economy) has boosted the S&P 500 to incredible heights, while the lack of Growth stocks in the FTSE help explain its lagging status.

But if inflation ignites across the world as we’ve been pondering over this week, this dynamic flips around: the lack of Value stocks in the S&P will hamstring it, while Value’s majority share of the FTSE should put wind in its sails.

Not all stocks outperform in inflationary environments, but thanks to London’s status as the Commodity Capitol, there are plenty of them in the UK to shield shrewd British investors.