Gold gets all the attention. But that means there’s an opportunity to invest in gold’s smaller brother, silver. Especially right now, as I’ll show you in a moment.

But why invest in silver in the first place? It has many of the same advantages as gold, as well as some surprising pitfalls you need to know about before you get started. 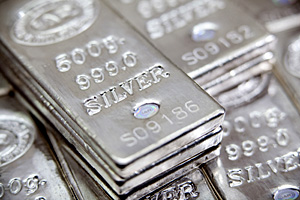 Investing in silver is only one part of the decision to do so. You also need to decide on how you want to go about it. We’ll look through the options below.

But first I’d like to introduce you to the history of the remarkable precious metal that often flies under the investing radar.

The history of silver

Did you know the history of money in Britain is far more connected to silver than gold? After all, the very name “pound sterling” comes from the fact that every pound coin used to be a pound of sterling silver.

In fact, sterling silver gets its name from the level of purity of a pound coin – 92.5%. Historians argue about just why the word sterling was connected to the pound in the first place. Even the symbol of our currency comes from the pound symbol “lb”.

The 92.5% purity was enforced in a horrifying way. Henry I reportedly castrated anyone who minted the wrong purity – about half the moneyers in 1124. Since then it has been rarely treated with such importance.

Why invest in silver?

There are many advantages silver has over gold. As well as some pitfalls. But most of the reasoning is the same.

Unlike savings and bonds, nobody can default on you when you own silver. There’s no counterparty risk that someone won’t pay what they owe you. Especially if you hold the physical metal. Silver can’t be printed into existence like money and it doesn’t rely on company directors doing their fiduciary duty to hold value. In short, it’s an anti-financial asset. An investment that does well when everything else is in trouble.

This means silver can benefit from a booming economy as well as one in trouble. In particular, silver is used in the high-tech industries which are set to boom in the future. Solar, battery power, electronics and telecoms, for example.

Silver can be very volatile in price. That’s both an opportunity and a risk. For example, during the last two great bull markets in precious metals, silver outperformed gold dramatically.

You can use silver’s volatility to your advantage by waiting to buy during a crash and sell during a spike. Use the specified price buy and sell orders of your chosen silver brokerage account rather than buying at the spot price. And don’t use leverage (debt) to finance your position. It’s too risky during a crash.

Of course the main reason to invest in silver is an increasing price. That’s not a given for any investment, but there are several reasons to be optimistic.

Predicting the price of silver

The silver price is expected to rise over time because of its industrial uses and because of inflation. Central banks around the world have been printing money like mad. For now, this money has flowed to banks but not much further. If the economy starts firing again, there could be a great deal of inflation. This would make precious metals rise in price, silver among them.

So where is the silver price now? After a spectacular spike after the financial crisis, the price crashed back down to reality. 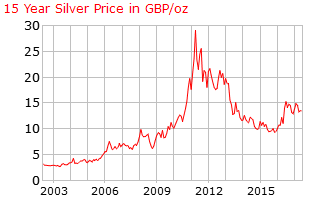 These days, gold and silver are no longer money. At least not in the same sense. But the gold-to-silver price ratio is still important. It tells you when one is overpriced and the other underpriced. We’ve moved a mile from the 16:1 ratio though. Over the last few decades the average has been around 47.

The ratio currently stands at over 70, making silver very cheap relative to gold.

As you can see, we are near the top of the cyclical ratio:

This means silver is very cheap relative to gold. If the gold price remained stable and the ratio returned to, say, 35, that means a doubling of the silver price.

There are plenty of ways to gain exposure to the silver price. You can buy the physical metal in various forms, invest in financial market investments that mimic the price of silver, or buy silver mining shares.

Unfortunately, silver miners are very rare because silver is usually a by-product of other mining. And the volatile silver price makes it a dangerous affair to pitch an entire company’s value on the one metal.

Let’s compare owning the physical metal with financial market options like exchange-traded funds (ETFs). You can also trade the price of silver using spread betting and contracts for difference (CFDs), but that’s a different game.

Just as for gold, it’s important to hold physical silver if you really want to benefit from its non-financial nature. However, because silver is commonly used as an industrial metal, it is therefore subject to VAT. This is a big cost for silver investors.

Investing in physical silver is surprisingly easy. You simply go to a bullion or coin dealer and make a purchase. It’s subject to VAT, remember. But the process is simple. Just as with gold, there are numismatic, semi-numismatic and bullion options. If you want to invest in silver, the latter two are far better options.

But you might be best off investing in silver in an alternative way. Simply buy silver household items at auctions without reserves. You’ll often manage to purchase them below their silver value. And from there on in, their value will fluctuate alongside that of silver, if imperfectly.

Also, many industrial companies sell their silver offcuts. These will be bizarrely shaped pieces of silver that are of no use to anyone, except a silver investor. If you happen to know someone who works at an industrial firm that uses silver, be sure to ask.

As for silver ETFs, there’s one on the London Stock Exchange with the code SLVR. This is probably the very easiest way to gain exposure to the price.