The best ways to invest in silver

The best ways to invest in silver

Like the sylph that winks at you from behind a tree, cajoles you with seductive promises and then leads you up the garden path, silver is the metal that promises riches beyond your wildest dreams – and rarely delivers.

Today, we consider whether it’s time once again to let the silver sylph seduce us.

There are countless reasons to own silver, yet still it disappoints

Silver is in demand as an industrial metal. Every year, silver finds more and more use in a range of applications from biotech to electronics.

Computers, smart phones, tablets – they all need silver. And the Chinese are buying more of the stuff we take for granted – from medicine to jewellery to optics to investment to whatever else it is that silver gets used in.

The silver exchanges are manipulated, the price is suppressed, there isn’t the silver to deliver on the silver that’s been sold. We’re headed for the mother of all short-squeezes. Quick! Buy silver.

Miners are struggling to find new silver deposits. All the stuff near the surface has been mined. Funding for exploration has dried up. Where’s the new silver going to come from? Quick! Buy silver.

All these reasons and more to own silver. Yet it languishes around $20 an ounce, like a drunken gunslinger in a hammock remembering former glory days, unwilling to move.

Even this year, it has frustrated investors. Silver is gold on steroids we are told. What gold does, silver will magnify. Is that so? Gold is up about 12%. Gold miners 25%. Junior gold miners 36%. Silver – just 10%.

What then is the point of all those extra storage costs? Not to mention the VAT. Aaaargh! Wretched silver. The day I dispose of mine will be the day before all its promises come true.

So what’s next on the cards for this ever-frustrating metal?

At present the gold-silver ratio (that is, the price of gold divided by the price of silver) is in a clear upward trend. In other words, gold is outperforming silver, and the trend suggests it will continue to do so.

On the chart below, I show the ratio between gold and silver over the last ten years. The red line is the 52-week moving average – it’s rising. And the parallel blue lines I have drawn to identify the current trend.

You can also see the point of maximum extremity it reached during the credit crisis of 2008 – 92.5 ounces of silver per ounce of gold.

How long will this trend continue for? Your guess is as good as mine. But I have 72 as a target, for what it’s worth.

At present silver is doing its usual thing and having trouble deciding if it’s an industrial metal, like copper or iron ore, both of which are having a rotten 2014, or if it’s precious.

During periods of so-called disinflation or deflation, you’re better off with gold, if you have to own just one of the two.

Silver’s time will come again, of that I have no doubt. But for now you’re better off with gold or gold miners (more on that another time).

A potential trade in silver

That said, based on recent price action, there is a trade to be had in silver. Look at this five-year chart. The red band was resistance back in 2010 and 2011. Now it has become support, as demonstrated by the blue arrows.

The low-risk trade is to buy silver as close to that red band as possible and place your stop just below it. If $18-$19 doesn’t hold, the game is over. If it does hold, $26 is a reasonable short-term target.

But if I add a simple trend line to that chart and remove the red band, things look rather more ominous. Here we see the same chart, with a trend line drawn down from the 2011 highs. Silver re-tested that trend line last week (where I have circled) and failed. This portends lower prices. 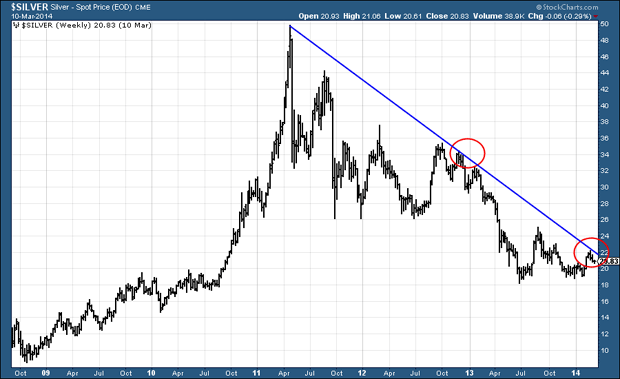 It shows how you can manipulate the same chart to suit whichever bias you are hoping to confirm.

But a break above that blue line may well be worth buying.

Back in July I wrote about how the total absence of funding for lead and zinc pointed to significant shortfalls in the years ahead (existing mines are closing, development projects are being halted, funding for exploration has disappeared).

That story has not changed significantly. And given that silver occurs with lead and zinc, this absence of investment is also bullish for silver in the longer term.

But given its volatility, the way to play remains to own silver and sell when it spikes. I’m not sure the conditions are quite ready for a mammoth silver spike, but some gentle appreciation seems possible.

There’s also the option of silver miners, which are a whole risk in themselves. First Majestic (TSE:FR; NYSE:AG) is the stand-out pure play, though its cash holdings are down notably. Impact (TSX.V:IPT) is a dependable small cap producer. And Santa Cruz, (TSX.V:SCZ) with its quality assets and management who don’t seem to deliver, has got take-out written all over it.

• Life After The State by Dominic Frisby is available at Amazon. An audiobook version is available here. He is crowd-funding his next book, Bitcoin – the Future of Money.