Silver: a better bet than gold?

Silver: a better bet than gold?

Gold hit an all-time high of $1255/oz this week. It’s a sure sign investors are getting more and more spooked. But gold isn’t the only safe haven for worried investors. Another option is silver. It hasn’t done as well lately, so could this be the time to buy?

Silver may have doubled from its late-2008 lows to $18.8/oz. But as the dollar rises and dollar-priced silver (and gold) falls against it, silver hasn’t regained its $20.8 early-2008 high. However, in sterling, which has been weak against the dollar, silver is more than 20% up on March 2008.

Meanwhile, since the start of the global financial crisis three years ago, silver has underperformed gold by 20%. Why? In part because “silver remains the preserve of relatively few contrarian investors”, says Mark O’Byrne of GoldCore, “the media and financial press rarely cover it”.Silver’s underperformance is also down to its industrial usage. So, unlike gold, the price has been influenced by the economic cycle. But those issues aside, the long-term demand/supply balance is now moving ever more into the silver bulls’ favour.

Silver’s industrial uses account for around 50% of total demand, says metals consultancy GFMS. Indeed, more than 90% of all the silver ever mined has been consumed by the world’s photography, technology, medical, defence and electronic industries. And more uses keep being found – for example, in antibacterial applications. So Barclays Capital reckons industrial demand will rise by 12% this year.

But silver supplies themselves are steadily shrinking. In 1900, global silver stocks totted up to 12bn ounces, according to commodities researcher CPM Group. But by 1990, that figure had dropped to around 2.2 billion ounces. And today, ‘above ground’ refined silver inventories amount to less than one billion ounces. Indeed, for most of the last 20 years industrial demand alone has outstripped mined supply. The deficit between supply and demand currently runs at between 50million and 100 million ounces a year, says David Levenstein on Before It’s News.

So far, the shortfall has been met by drawing down private and government inventories. But the US government’s stockpile is almost exhausted and the supply from China, India and Russia is falling. Only a few pure silver mines are still going, many with depleting reserves. So the supply from these can’t increase much even if the price soars, says O’Byrne.

In addition, 80% of mined silver is a by-product of the extraction of base metals such as copper, lead and zinc. Higher silver prices won’t spur miners to raise production – this will only result from more demand for base metals due to faster global GDP growth. If the world economy returns to recession, base metal demand will fall, meaning less new silver will be mined. And the current silver price makes recovery and recycling uneconomic.

This all points to a higher silver price in the longer run. But it’s as a store of value that silver is likely to receive its biggest near-term boost. The gold/silver ratio, just over 65 ($1235/$18.8), is around the middle of the last decade’s range. The further gold climbs, the more likely silver is to tag onto its coat tails. “Silver responds well to inflation, as well as serious ‘financial dislocations’ (to put it nicely),” says Jeff Clark on Financialsense. In the 1970s, it rose by more than 500%. If the ratio reverts to the last century’s average of 47, at current gold levels, silver would top $26 – that would create much more investor interest. Below, we look at the best ways to buy into silver.

The best bet in the sector

The world’s biggest silver miner is London-listed Fresnillo (LSE: FRES). However, gold accounts for about a third of production. So for a purer silver play, take a look at Silver Wheaton (NYSE: SLW), the world’s largest ‘metals streaming’ business. 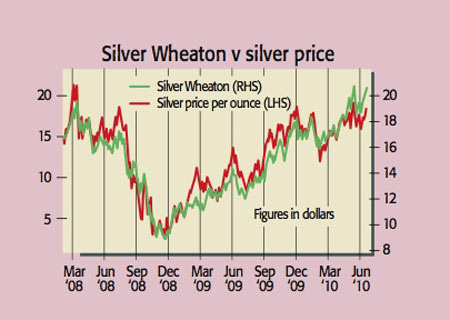 The company has 14 silver purchase agreements, and two similar precious metal contracts. In exchange for an upfront payment, Silver Wheaton can buy (at a relatively low fixed cost) part, or all, of the silver production of a number of high-quality mines located in politically stable areas. The firm can then sell this metal on the open market.

In 2010 the firm forecasts total production of 22.2 million ounces of silver and 20,000 ounces of gold. By 2013, Silver Wheaton sees annual production jumping to around 38 million ounces of silver and 59,000 ounces of gold. And the company won’t even have to fork out any capital expenditure to achieve this growth. It all adds up to Silver Wheaton having “strong leverage to silver prices and little cost exposure”, says Haytham Hodaly at Salman Partners. His price target is almost 50% above the current $19.9. Investors looking for a classic silver stock should buy. For those who prefer to play the silver price directly, ETF Securities offers the London-listed ETFS Physical Silver (LSE: PHAG).

• This article was originally published in MoneyWeek magazine issue number 492 on 25/06/2010, and was available exclusively to magazine subscribers.