I’ve a story for you today – a deceptive one. Some might call it an investing success. Others might think it a failure. I’ll let you be the judge.

It starts with a precious metal called palladium. While that name might conjure images of a paladin in resplendent armour, the name actually originates from a fella with quite the opposite in attire, a giant in Greek myth called Pallas who is flayed by the goddess Athena.

Regular readers of this letter who can wind their minds back to before March (something I’m certainly struggling with these days) may remember the metal featuring quite heavily in this letter late last year and pre-lockdown this year (The streets are paved with palladium – 21 February).

I first bought it in 2016 after I became very interested in the metal’s applications and investment prospects. Though it sits beside silver on the periodic table and has a similar lustrous white appearance, palladium has some very different properties.

While some jewellery is made of palladium for its fine appearance, one of palladium’s main attractions is its low melting point and density. This makes it so useful for stifling exhaust emissions from cars that today more than half of all fresh palladium supply is hoovered up by catalytic converter production. (Its green credentials don’t end there: it’s also used in purifying hydrogen and groundwater.) This “green-sensitive” aspect gives it compelling credentials in a world where governments are only getting more insistent on cleaner energy consumption.

The price was around £480 per troy ounce when I first invested in the physical metal four years ago – I bought a 1 troy ounce bar (refined and assayed by Pamp Suisse) mostly as an investment, but also as a curiosity. It was around that time that I was just getting into precious metals in earnest (and my addiction to silver was just beginning).

Over the years since the price has soared and then some, though it got whacked hard in March and has yet to recover. Few are buying cars or jewellery at the moment, which has massively dented demand, but at the same time plenty of mines have been shut or otherwise disrupted by the WuFlu, which has in turn shrunk supply. 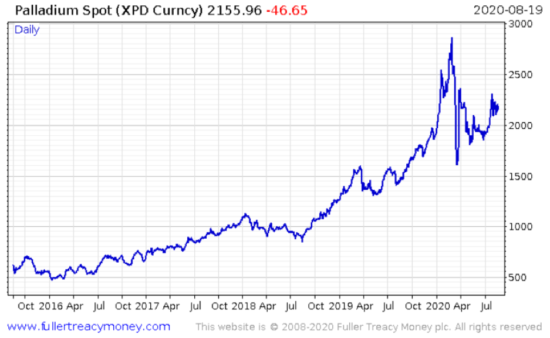 Palladium price in USD (sadly don’t have a GBP chart)

What happens next for the metal will depend on how soon lockdowns cease and whether consumers will have any money by that point to start buying cars again. The scale of government intervention to stimulate such spending represents a wildcard which could majorly boost the market, but it could also fail and cause dysfunction instead.

Anyhow, I sold that troy ounce bar recently for £1,900. I’ve come to the opinion that – with the exception of gold and silver – if you’re wanting to invest in the metals space, ETFs are the way to do it – no VAT and much lower frictional costs.

That’s an almost 300% return on my initial investment over four years, in a physical asset with no risk of the custodian going bust. Not too shabby…

… or so you might think. For there’s one aspect of this palladium story that I haven’t told you.

I didn’t pay with pounds.

I paid with bitcoin.

At the time I was using BTC to buy things, partly as I enjoyed the novelty, and partly to support BTC adoption by vendors (you need people to spend a currency if you want it to be a currency, after all).

Bitcoin was of course worth much less back then, and that palladium purchase set me back almost an entire bitcoin: £480 back then was 0.95 BTC.

Had I just held on to that 0.95 BTC… it’d be worth roughly eight and a half grand today.

Of course, I really can’t complain – it’s not like I spent all of my bitcoin on that bar of metal. But it illustrates the kind of regret and the sense of missed opportunity that only bitcoin can breed in investors.

I know I don’t want to miss out on an opportunity like that again – and I don’t want you to either. That’s why we’ve been recording a docuseries on bitcoin to inform you of exactly what’s been going on in that market – and show you some of the opportunities that have emerged in that wild frontier of investing.

While bitcoin’s gains are glorious in retrospect, you must bear in mind that blindly charging into crypto can be ruinous – if you want to play in that space, you need to be informed. That’s why we’re producing documentary-style content – and I’m telling you about my mistakes.

Stay sharp, keep your wits about you, and make sure you know what you’re doing. As I remarked to Sam Volkering recently, if the crypto market was a physical area, you’d want a revolver holstered by your side before you wandered in…

In tomorrow’s letter, we’ll explore how the Arab oil embargo of the 1970s is repeating in the digital asset market, and ponder the strange activities of a certain group of billionaire “whales”…

PS For a similar tale of missed opportunity which led to me spending $5,000 on a pair of boots in New York, see Milking Mayfair – 29 September 2019.

ABERDEEN, SCOTLAND – Anybody bought a new car recently? I don’t know anybody who’s used the lockdowns as an auto-shopping opportunity, but there’s gotta be some out there… I was struck by a statistic published recently that car sales fell…