ABERDEEN, SCOTLAND – Is bitcoin becoming a household name once again?

While the subject of bitcoin will be familiar to both initiates and veterans of Capital & Conflict, something I noted frequently in this letter, both in 2019 and 2020, was how price surges in BTC did not attract much mainstream attention. (For reference, see: Much Ado About Something from May 2019 and The silent charge of a quiet bull from August 2020.)

My favourite tool for gauging this is Google Trends, which lets you see the popularity of certain terms entered into Google Search. As we’ve noted in previous letters, Google searches for the term “bitcoin” have never come close to their late 2017-early 2018 peaks… but with a chart of the bitcoin price making it to the front page of the Financial Times yesterday, it’s worth giving that chart another check.

It certainly is making a run for it. When it reached this level in 2017 during the boom, it was already on its near-breathless rush to an all-time search-popularity high, which it reached in less than a month. The bitcoin price would peak at the same time it did.

It’s somewhat fitting that the same day the FT gives bitcoin front-page recognition, the bitcoin price drops by over $5,000. “The last broadsheet” has poured scorn on bitcoin with an aloof air of dismissiveness for years – to see the newspaper crown bitcoin’s grand performance on the front-page is a contrarian indicator…

That’s not to say it’s run out of scorn though – we’re a way off that yet. When we see FT journos waxing lyrical on the asset with uber-bullish expectations, I’ll start to get really worried. For now, yesterday’s washout just looks like par for the course – a “gentle” reminder to newcomers that the brave new world bitcoin represents has no seatbelts or airbags.

Have you heard bitcoin mentioned in unexpected places over Christmas and New Year? The festive season has of course not been the same with the lockdowns, so occasions where debate on the topic could be raised are fewer – but if Google Search is to be trusted, interest is definitely on the up. If you have any anecdotes, I’d love to read them: [email protected].

And now, to the question of the hour which has me stumped. Why does bitcoin only seem to go up at night?

My colleague Charlie Morris has made this great chart of BTC performance since July, and found that almost all of bitcoin’s performance has occurred between ten at night and eight in the morning. During UK and US trading hours, the bitcoin price has barely done anything: 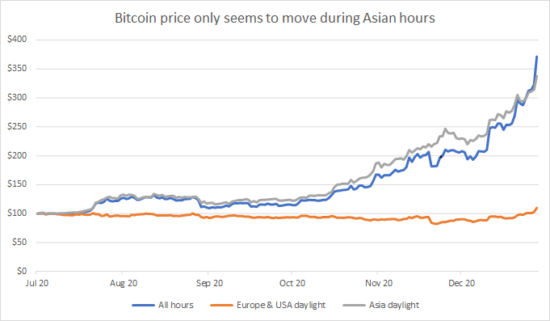 Why has bitcoin only been rising when it’s daytime in Asia? What’s going on over there? Feel free to send in your theories.