The silent charge of a quiet bull

The silent charge of a quiet bull

Why do so few people see what is happening? Bitcoin is quietly creeping back to the all-time high. The network is growing, the space is more vibrant than ever before, and volatility remains low. If this sort of performance comes during a quiet market, let’s keep things just as they are. It’s all the proof you need that when the majority eventually find out what is going on, the best will be behind us…

We noted last week that gold is now being viewed by some investors as an internet stock.

Carrying on the theme of “internet stocks” which are not actually internet stocks, we begin the week with a look at bitcoin – what our resident fund manager Charlie Morris calls “the best internet stock of all time”.

Charlie, our resident Grenadier Guard and fund manager, has become increasingly bullish on BTC in recent months, and made an interesting comparison between it and the tech majors that have come to dominate so many investors’ portfolios.

When you compare the performance of bitcoin this year to the internet titans, you can see that their performance is remarkably alike.

Of the four most valuable companies on earth, [bitcoin‘s performance this year] has only been narrowly pipped by Amazon. It is comfortably ahead of Facebook, Alphabet (Google) and Microsoft – quite an achievement. No sector or country comes even close. You have to wonder why the majority of leading tech investors don’t allocate to bitcoin.

Neck and neck with Amazon

The idea that BTC might be competing with the likes of Amazon for investors’ cash is quite a striking one. After all, Amazon has become one of the most popular portfolio holdings and successful businesses in the world. The share now dominates stockmarket indices and is included in all manner of stockmarket ETFs (some 350 at the time of writing, many of which have nothing to do with the internet or retail sector). For bitcoin to be actually rivalling Amazon in investor demand is a subversive – nay, radical – idea.

Bitcoin is not a share of course; it isn’t listed on stock exchanges (not directly, anyhow), doesn’t file earnings, doesn’t have a CEO, and can’t raise money through debt or diluting its own supply (key to its allure in the first place). The market structure for the pair of assets is markedly different (crypto exchanges maybe getting closer in nature to stock exchanges, but they’re a way off yet), so it’s not exactly an “apples to apples” comparison.

Still, it’s worth bearing in mind the correlation to tech stocks which BTC has. While tech stocks have received great fanfare during lockdown however, bitcoin’s popularity hasn’t blown up in tandem – that’s one of the reasons Charlie has become so bullish

“Never bet against a quiet bull” he says, pointing to the fact that Google searches for “bitcoin” have not exploded, while its price has:

Bitcoin is up 62% this year, which is remarkable. Yet the level of hype remains subdued. Worldwide Google searches are 85% below the 2017 peak levels while the price is now just 38% below the all-time high. 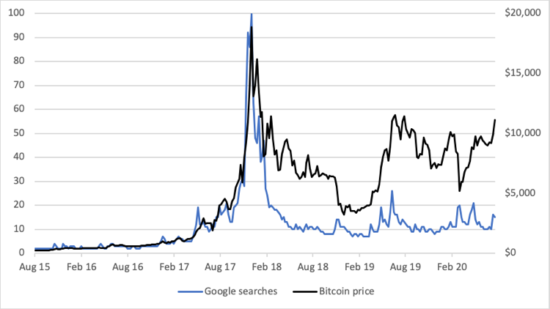 Something’s going on in BTC at the moment, that’s for sure. That’s why my colleagues here at Southbank Investment Research have been speaking to some of the brightest minds in the space to figure out the state of play now – and what comes next. Some of the videos and interviews are still in post-production, but you can watch a trailer and sign up to watch the videos when they go live here.

One thing I’ve noticed recently is that despite the lack of mainstream popularity (which would be expressed in Google searches), some high-profile investors have become very bullish on BTC of late. Perhaps even too bullish.

This is Raoul Pal, a high-profile macro investor who runs his own financial media platform called Real Vision. I find his insights interesting, and he’s shared many compelling contrarian views over the years. However, this particular tweet he sent out recently put me on guard: 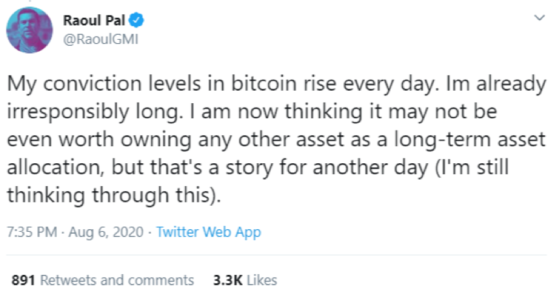 Now to be fair to the man, he does clarify that he’s still thinking through it, and you can lose an awful lot of context in Twitter’s short message format. However, that statement in the middle, suggesting that BTC is the only asset worth holding over the long term, brings back “memories of mania” from 2017.

I wonder if this might be a contrarian indicator, a sign that BTC is getting too far ahead of itself (in the short term, that is. I too am long term bullish on bitcoin, but I’m definitely open to holding something other than just BTC).

Then again, that Google searches chart certainly doesn’t evoke memories of 2017. The everyman isn’t taking part in this rally. So we have lots of excitement about this fledgling asset… but originating from within the investment community.

Hmmm. I feel I’m missing a piece of the puzzle here, so we’ll be returning to this topic tomorrow. But if bitcoin’s “silent bull” pushes it 60% up on the year… I look forward to discovering its loud phase. Knowing bitcoin, we won’t have to wait long.

PS Take a look at what’s going on in the wild frontier that is bitcoin and crypto in our upcoming Beyond Bitcoin event. We’ve invited some of the fledgling industry’s finest to give our readers an inside look at the latest developments in the space, that threaten to disrupt the financial industry – and unlock wealth for investors. Click here to get the content as soon as it’s released.