What’s with the squid?

What’s with the squid?

Watch the live stream on Friday…

We’ll be streaming our latest episode of Southbank Live on Friday at 10am on YouTube – if there are any relevant news items or investing topics you’d like John Butler and I to discuss, please send them over to us here.

CHEDDAR, SOMERSET – What is it about the subject of finance that lends itself so much to squid metaphors?

In 2010, Rolling Stone famously described Goldman Sachs as “a great vampire squid wrapped around the face of humanity, relentlessly jamming its blood funnel into anything that smells like money.”

The “vampire squid” moniker has remained, though the bearer of the title has since shifted. Some believe passive-fund behemoth BlackRock is “the new vampire squid”, while market observer Jim Grant has since described the Federal Reserve as “the Vampire Squid Of Vampire Squids”.

This need to characterise financial enemies as squid-like has been around for some time. 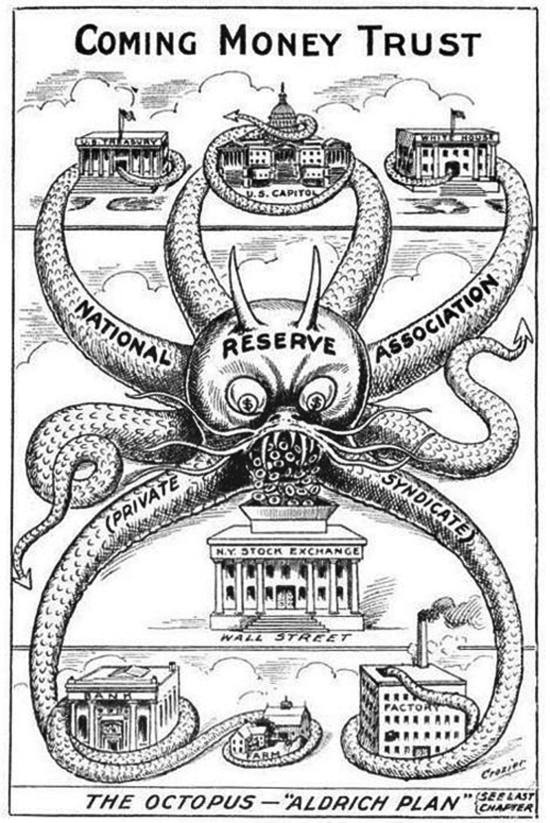 This political cartoon dates from 1912. It warns against the creation of an American central bank – specifically, a piece of legislation known as the “Aldrich Plan” – by depicting it again as a ravenous squid. The Aldrich plan didn’t come to pass, but the US would have a central bank just a year later after a similar bill called the Federal Reserve Act was instated – and the rest is history.

The zoo of finance appears to keep bulls, bears, and squid as part of its permanent fixture through the ages.

But in today’s note, we’ll be encountering the squid of finance in quite a different guise. Presented not as a monster devouring the wealth of nations, but as a somewhat less intimidating (if unpredictable) creature…

By Nickolai Hubble for Fortune & Freedom

Yesterday’s dive into the inflation data ended with some pertinent questions: how do you juggle incontinent squid? And, more importantly, what exactly is financial repression?

Conveniently, Russell Napier has provided another brilliant analysis (on both topics). His claims go some way to explaining the mystery of high inflation but low bond yields, as discussed yesterday.

To remind you, US inflation is above 5%, but even the 30-year US Treasury bond yield is around 2%. Investors are losing money on loans to the government. A lot of money.

Why would they do so?

Russell Napier argues that this is the wrong question to ask. The right question is why the US government would accept the situation.

You see, just as investors lose out by inflation above bond yields, the government gains. The government’s debt is being paid back by inflation. A few trillion dollars is easy to repay when the value of money is… flexible.

For the government to get away with the inflation scam, interest rates must not be allowed to spike, even as inflation takes off. Otherwise, the government’s gains on inflation will be offset by higher costs of borrowing. And that’s not to mention the financial crisis which would occur from us borrowers who can’t just print money having to pay more.

The bid to keep a lid on interest rates while engineering inflation is the key to financial repression. It’s all about stealing from investors, slowly.

Thus, central bankers are keeping bond markets rigged by preventing yields from rising. This explains the continuing large-scale quantitative easing (QE – the creation of money to purchase government bonds and/or other securities) measures despite inflation. Central banks already own vast chunks of their sovereign bond markets by now. They control the market and thereby interest rates.

Here’s how Russell Napier recently explained all this to the Swiss website The Market:

The most important part of my forecast is not the inflation rate per se. It’s that interest rates will not be allowed to reflect that rate of inflation. That is what changes the entire structure of finance. This is the key question: Will interest rates, short and long, be allowed to reflect 4% inflation? My answer is No. This is because we will be entering a period of financial repression, where governments keep interest rates below the rate of inflation, just like after World War II.

Of course, it’s not just the government that benefits from interest rates below inflation. Because the government isn’t the only borrower in the economy. The problem is that it’s the savers who get left holding the bag of devalued money:

For the average guy in the street, financial repression can look quite good. Let’s say your wage is going up at 5%, and your mortgage rate is 3%. This is not a bad world to be in at all, arguably for the majority of the population even if their wages only grow in line with inflation. The person who pays the price for this is the saver. Even if you just took the period from 1945 to 1957, which was the period where everybody was doing quite well, you lost 35% of your savings if you held British sovereign bonds.

Throw in the house price boom and borrowers are rolling in it.

The big question is whether inflation does spike out of control during a period of financial repression. Put another way, what really matters is whether or not we get too much inflation.

Napier doesn’t expect this, as far as I can tell. But he does discuss in detail the key variable for future inflation. It’s something called the velocity of money. Let’s go on a quick tangent to explain it…

That sounds good, but it actually amounts to the following: either inflation rises to 100%, the amount of goods and services doubles, or some combination between the two. Usually, the effect is of course in between, but primarily the impact is on inflation because it takes time for real GDP to grow.

Napier explained why he is focused on velocity in his interview with The Market too:

I think the great surprise over the coming years will be when velocity goes back up towards 1.6. But forecasting velocity is fiendishly difficult. It’s like trying to juggle an incontinent squid: Something you really don’t want to do, and you’re very unlikely to be successful. The change in velocity downward after 2009 fooled everybody. Many people at the time said that QE must create inflation. But because velocity collapsed, there was no inflation. I think it will surprise on the upside this time. So while we can’t forecast velocity, we can put a risk to it, and I think the risk of velocity shooting up is higher than any time since the 1970s.

Velocity is notoriously hard to control, let alone forecast. But it’s a crucial part of inflation.

Napier also focuses on the fact that, if inflation does rise, central banks will be impotent to rein it in. Because the true source of inflation is bank lending. And governments are pressuring banks to lend more, sidelining the central bank in the process.

All this is just a quick introduction to Napier’s ideas and forecasts. What makes him so interesting is that he predicted the lack of inflation for many years before recently swapping sides in the great inflation versus deflation debate.

I’d love to have him feature in Fortune & Freedom to explain more about what he sees coming for investors. But how?

Well, this is where my background in the circus comes in handy…

Should Napier agree to come on to our Fortune & Freedom podcast to discuss inflation, financial repression and the velocity of money, I will attempt to juggle three incontinent squid in a video.

Strangely enough, my Japanese in-laws seemed completely unphased about sourcing some incontinent squid when I asked them. But they also made me promise to only attempt to juggle them on the local beach…

Tomorrow, we dig into the great escape from financial repression. How investors can avoid being the victims of the government’s attempt to inflate away its debt.

To hear more from Nickolai Hubble, click here to get access to the free daily e-letter Fortune & Freedom, and be sure to access his latest podcast with Nigel Farage here.