Where the cult of central banking is leading us

Where the cult of central banking is leading us

The secret to walking on a tightwire is looking where you’re going. Not at your feet and the plunge either side of the cable! At the fixed point you’re hoping to make it to. Preferably without a chunk of your heal or calf getting sliced in a slip on the way.

Central bankers resemble a beginner when it comes to this. They wobble all over the place and have absolutely no clue where the wire leads to. They’re too busy looking down.

On one side of the wire they face deflation. This is a particularly gruesome outcome where falling prices make repaying debt harder and harder each year. The resulting defaults only make prices fall more, causing more defaults. This is a debt deflation spiral.

On the other side of the wire is something almost as bad – inflation. Rising prices can wreak havoc on the economy and destroy the value of the currency.

The central banker’s tightwire is strung at 2% inflation. It’s the narrow point they try to keep their centre of balance over. Any deviation must be corrected. We all know and understand this.

But it’s the destination that we’ll focus on today. Where does the wire actually lead us?

If central bankers use the interest rate to control the economy, their primary influence is debt. To stimulate the economy they lower rates and encourage borrowing. To rein in inflation they increase rates to make debt expensive.

This creates a world where debt is the cart before the horse. Instead of debt being about financing something, it is now a drug used by central bankers to maintain an economic high. The symptoms are everywhere.

People buy literally everything on debt these days. Between them, credit cards, consumer loans, payday loans, car loans, university loans and mortgages must cover almost all spending in the economy. My friend is even launching a lending platform for private schools.

But there’s no question mortgages form the base of Debt Mountain. They’ve reached extraordinary extremes. I don’t mean interest-only loans or loans without a deposit.

The Bank of Mum and Dad is now the ninth biggest mortgage lender in the UK with parents lending at a rate of £6.5 billion a year. Although, if the banks won’t lend the borrowers money, you have to wonder why not.

It’s unlikely the bank of Mum and Dad is doing income and credit checks. If these loans go bad it’s going to create a rather interesting phenomenon. No doubt the kids will blame their parents for forcing them on the property ladder if anything goes wrong.

But while house prices go up there simply cannot be a problem. And they are, most recently at a rate of more than 5% per year. This means collateral values are rising for the lender so they face little risk. And the borrower is getting richer even if they default.

Rising house prices don’t represent an increase in value or wealth though. They only show an increased willingness to borrow. People have to live somewhere, so if house prices go up, we’re only treading water on a rising tide. The home you buy has gone up in price just as the home you sell.

The only person who gets richer is the banker because mortgages have grown. Deposits are shrinking as the average mortgage rises.

All of this is enabled by central bankers. House prices boomed in the UK. But the tumbling interest rate has kept mortgage costs low. And so people simply borrow more. 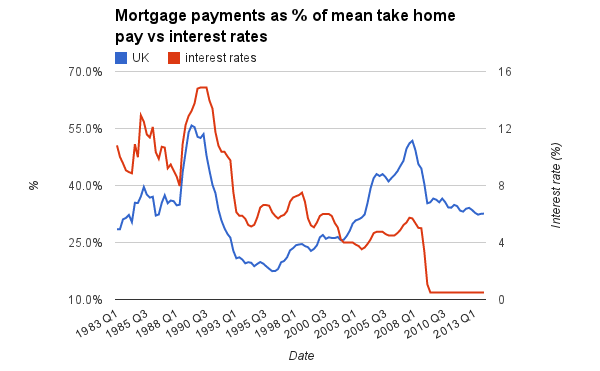 Central bankers haven’t just been busy manipulating us into borrowing by fiddling with interest rates. They’ve also removed the “left tail of our economic cycles.” Eric Peters from One River Asset Management explains how before 1955 we used to get about even years of inflation and deflation. These days we very rarely get deflation. Central bankers simply won’t allow it.

In such a world, borrowing becomes the smart thing to do. Inflation makes debt cheaper by making it easier to repay. And so borrowers are rewarded at the expense of savers.

Where this leaves us is fascinating. We’ve accumulated a giant mountain of debt. Interest rates cannot go up much without all that debt causing a huge economic problem. But inflation is already above the 2% target.

Central bankers are about to look up and discover their tightwire is a dead end.

Another problem with central bankers’ policies is that inflation and deflation can be a good thing.

During the Industrial Revolution we experienced steady deflation. Dramatic improvements in productivity made consumer goods cheaper. During an oil crisis we experience inflation as the price of everything related to oil goes up.

But these forms of inflation and deflation are really just the powers of supply and demand at work. If you interfere in them you create a problem. The economy can’t self correct. You get oil shortages and the benefits of productivity increases disappear.

A very stable rate of inflation, say 2%, is a big hint that central bankers are preventing the economy from correcting.

In the lead up to the Great Depression and Global Financial Crisis of 2008 we had very stable levels of inflation. This masked the problems being created. Huge debt bubbles were growing in a world of stable inflation. You know the rest.

The only way out

Central bankers are punting that the economy will pick up enough to overcome the debt mountain. At least that’s their official line. They’re actually just hoping that the debt bubble doesn’t burst on their watch.

Could we outgrow this problem? Only with very dramatic improvements in productivity. Population growth certainly isn’t keeping up, despite my best efforts.

There are bright spots though. All the fears about robots you can read in the media are a great sign for the economy. (Except for that sex-robot brothel story from Amsterdam.) The fear of robots resembles the fear of machines at the beginning of the Industrial Revolution. Back then the Luddites protested against the automated weaving mills.

The good news is everyone hates the oil industry. And that means the discovery of what my friend Nick O’Connor is calling “white diesel” should tear through the economy unobstructed. The surreal gains are baked in. Unless someone takes offence to the new diesel being called “white”.

We continue with the second half of our short report on the return of inflation. If you haven’t read part I yet, you can find it on the website here. Tomorrow, you’ll be hearing from a new member of the…