An inflationary end to Europe

An inflationary end to Europe

Today’s Capital & Conflict is issuing an all-out alert. The inflation spectre is back. But not in the UK. Somewhere far worse – Europe. In fact, I’m predicting this is the beginning of the end of Europe.

At the heart of understanding today’s Capital & Conflict is something I tried to explain yesterday. That was the theory. Today is the update on just why the theory is about to become reality.

But first, a quick recap.

Central banks are supposed to reel in inflation by increasing interest rates. And avoid deflation by decreasing them. This is known as countercyclical policy. You try and offset the cycle in the economy. The result is a more stable business cycle.

So what happens when you get both inflation and deflation at the same time?

In Spain, Belgium and Germany inflation rates have been soaring since mid-2016. Prices in Spain have gone from falling 1% per year to rising 3%. In Belgium, inflation has doubled to 3%. In Germany, the inflation rate is well over the European Central Bank’s (ECB) target of 2% too.

Meanwhile, Portugal, Italy and Greece are still well below the inflation target.

How do you set a monetary policy for both at the same time?

The answer central bankers give is to split the difference and hope for the best. They hope that inflation rates between the various countries will equalise. So by setting the rate for Europe as a whole, they’re doing their job well enough. As quoted yesterday, leading central bankers in Europe think diverging inflation rates inside Europe are simply not their problem. They only care about the eurozone as a whole.

But if you take a look at each country individually you realise how dangerous that apathy is. Spain is stuck with incredibly low interest rates and a high inflation rate. The Greeks have a moribund economy, so they’ll be horrified about increasing rates.

The result of the ECB’s middle-of-the-road policy is exactly the opposite of countercyclical. It’s pro-cyclical. The ECB is exacerbating inflation in countries with high inflation and strangling those with low.

The Spanish know where this conundrum leads. If rates don’t go up to where they should be for Spain, there’ll be an artificial debt financed speculative boom and then a bust in Spain. Just like in the early 2000s. It’s set to happen all over again, just like last time.

Alternatively, the ECB could increase rates to fight off inflation in Germany, Belgium and Spain. But Greece can’t afford a higher interest rate. It would stifle economic growth. Not to mention its government budget can’t afford the additional interest expense. And that’s the key difference this time around. More on that in a second.

The point is that there’s no way out for the ECB. But we do know that central bankers prefer inflation to get out of hand rather than letting in deflation. That’s the history of money in every different currency. It eventually gets inflated out of existence.

All this presents excellent investment opportunities. For example, Germany is having the housing boom it missed out on in the 2000s. Back then interest rates were high for the “sick man of Europe”. This time they’re low for the economic powerhouse of Europe.

But it won’t end well. Just ask the Spanish and Irish.

Governments in Europe can’t afford higher interest rates. They have too much debt. They’re quite happy to watch inflation eat away at that debt while the ECB keeps interest rates low.

Let’s take a look at government bond yields – the interest rate the government has to pay to borrow more money. If you adjust them for inflation to get the “real rate”, they’re bizarre. The Spanish can borrow money for two years at -3%! The Germans at -2.6%. The Belgians can borrow money at -2.27% for ten years!

It’s completely bonkers. Buyers of government bonds are losing money, and fast. Governments are making money on their borrowings. Adjusted for inflation, keep in mind. Sometimes even unadjusted. While this lasts, governments will be happy to have high inflation and low interest rates. But the bubbles are building just like in the 2000s.

Once inflation gets out of hand in the booming parts of Europe, or rising interest rates cause problems in the sick economies, nations will demand restoring control of their own monetary policies. But that would be such a big strike against the heart of the EU, it would probably break up.

So watch the coming inflation rate data with one eye and the ECB interest rate with the other. Europe is on the road to ruin no matter which way it turns.

Tomorrow is election day in the Netherlands. (Not today, as I mistakenly wrote yesterday.)

The significance of the Dutch elections for you is symbolism, not policies. So you needn’t worry about anything eventful happening policy wise. But the results could signify that the moods which gave us Brexit and Donald Trump are alive and well on the continent too. And that confirmation would be big news.

The Netherlands has a very fractured parliament. The eventual government will be a coalition of some sort. The expected breakup of votes shows why coalitions are needed to reach a majority. 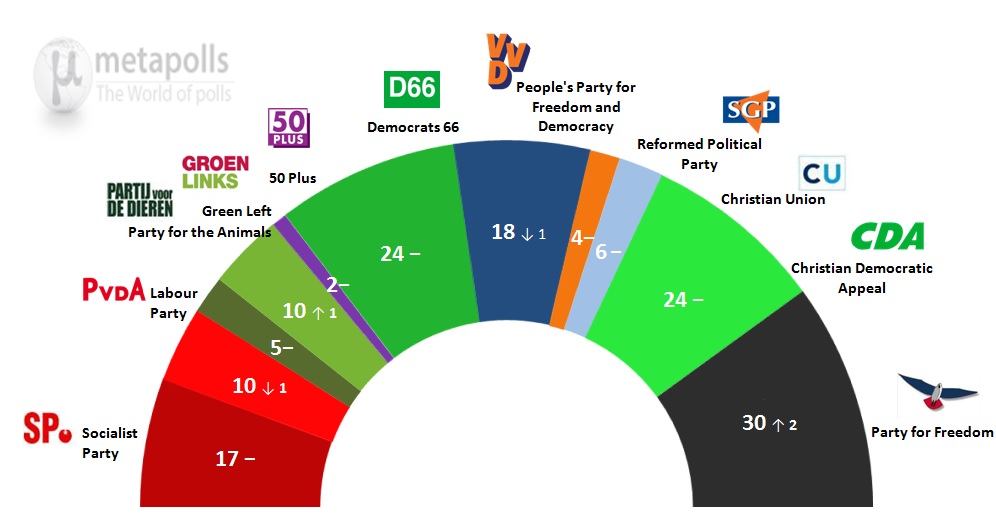 Geert Wilders doesn’t seem like the cooperative type. So his party will likely be excluded from government, even with the biggest share of the vote.

Still, Wilders will be the most important politician in Europe for the next two days. If his party can take the biggest share of seats, it’ll be a big victory for euro sceptics and anti-immigration campaigners.

Netherlands’ political parties have fantastic names. They include the Party for the Animals, the 50Plus party, the Reformed Political Party and many more. Wilders’s Party for Freedom is the one to watch. But don’t confuse it for his incumbent rival’s People’s Party for Freedom and Democracy.

The last minute run-up to the election couldn’t be any better for Wilders. His Christmas Turkey came early this year in the form of Turkish president Recep Tayyip Erdogan.

Holland and Turkey have been in a political feud for a few days now. But things just got serious exactly when Wilders needed it. First the Turkish president accused the Dutch of being Nazis in various ways. The Dutch responded by banning diplomats from entering. The Turks refused to let a Dutch politician leave. Now Erdogan is threatening to release the migrant hordes on Europe. An estimated two million of them sit at the Turkish border waiting.

And that is precisely what Wilders needs on election day. A reminder of millions of refugees waiting to get into Europe. A misbehaving potential member of the EU in the East. And a political stoush involving the word Nazi.

The bizarre thing here is that the Dutch have been very pro-Turkey for some time. Their investment into Turkey amounts to 22 billion US dollars, putting the tiny country at number one, with a 16% share of Turkish foreign investment. So both countries are shooting themselves in the foot. So you can expect a surprisingly sudden resolution.

It’s not just Holland’s elections that you need to watch. It’s Turkey’s too. My birthday, Easter and a Turkish referendum are all on 16 April. The second most important of the three features a big question over Turkey’s political system.

Erdogan wants to have a presidential republic instead of a parliamentary one. It’s sort of like the US system versus the British. The president would have far more power if he gets the evenly split vote to go his way.

That prospect would be a major pain in the neck for the EU, which has been trying to bring Turkey into the fold. The EU just can’t get a break…