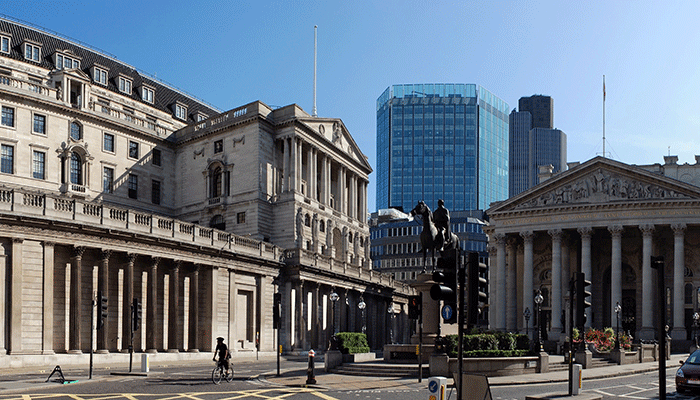 If we’ve learned anything in the last four days, it’s that the biggest beneficiaries to “loose” monetary policies are stocks and bonds. And now they’re the biggest losers. They’re falling because central banks around the world have had a look at the results of years of quantitative easing (QE) and reached a tentative conclusion: it hasn’t worked, it isn’t working, and it may never work.

And just like that you get German ten-year bond yields trading in positive territory for the first time since Brexit! It’s a small signal. But amplify it and the reverberations are loud and global. There are $16 trillion worth of sovereign bonds trading with a negative yield. If long-term interest rates begin to rise, that money will want to leave the bond market, with predictable results.

Well, one possible result – in a worst-case scenario – is a bond market blood bath. That’s what you’d get if interest rates spiked suddenly on the long end of the yield curve. An orderly queue would become a mad rush for the exits.

That kind of spike is usually associated with an external event (war or terror or an unexpected bankruptcy or default from a key financial player or sovereign). Could it happen now? You’ll have to ask Vladimir Putin, or Kim Jong-un, or Barack Obama. It could. There are only 129 days left in the Obama presidency. Geopolitically, they could be the most dangerous of his entire eight years in office.

But it won’t happen as long as central banks remain in control. And that’s the real question right now. Are central banks still in control? Were they ever? Has the monetary endgame begun?

The European Central Bank (ECB) seemed to give up on QE last week. By not extending its bond buying programme past March 2017, it’s led investors to believe that the free-money party in the bond market could be over. Meanwhile, in the US, Federal Reserve officials were busy on Friday talking up the prospect of a rate hike when the Federal Open Market Committee meets later this month.

That sent US stocks into a tailspin. The Dow fell 2.13%, the S&P 2.45% and the tech-heavy Nasdaq 2.54%. The selling continued in Asia on Monday and carried through to Europe this morning. Which prompts the question…

What do you get when you combine the end of loose money and the beginning of tighter money?

You get higher interest rates. But you also get the end of QE as we know it. And that, I would suggest, is what you’re seeing stockmarkets wrestle with right now. The path of least resistance is to sell stocks and bonds now, sit on cash, and wait for the Fed’s next move.

BoE next, then what?

Before the Fed takes centre stage, it will be Mark Carney again in the limelight for the Bank of England (BoE). In the face of relentlessly positive news about the British economy in August, the BoE’s Monetary Policy Committee has a big job ahead if it intends to talk down sterling. Perhaps it will get some help with Brexit secretary David Davis briefing the House of Lords later today.

But if Carney follows the lead of his peers, what will he do? Nothing. He’ll say the bank plans to watch the data but the prudent action at the moment is to sit tight. And merely sitting tight says there is no new immediate stimulus ahead. For now, sitting tight is tighter monetary policy.

Without that stimulus, and with Deutsche Bank the latest to claim that the 35-year-old bull market in bonds is over, you have the makings of an even bigger bearish move in stocks. This, by the way, is exactly what systems like TradeStops were designed for. Be aware of volatility. Set your stop losses. And stick with them!

The best-case scenario is that the end of QE is a high-water mark for intervention. Investors – especially the institutional ones – will stop acting like smack-addled junkies whining for a free fix and start acting like rational human beings again, capable of independent thought and actual judgement. Finding the intrinsic value of a security will be a useful skill again.

There are, though, businesses that are not terribly interest rate sensitive. What kind? The kind that don’t rely on borrowed money to increase sales or heavily invest in capital. The kind where customer demand is not negatively impacted by higher rates on mortgages and credit cards. After all, interest rates have been high in the past and it didn’t kill the economy, did it?

Did you see the video of Hillary Clinton stumbling as she left a 9/11 memorial service yesterday? It was alarming. And it’s raised concerns about her health. Her campaign has released a statement saying she’s suffering from pneumonia, which would explain a recurring (and fearsome-sounding) cough.

“What happens if Clinton can’t run?” a friend asked this weekend.

“Never write off a Clinton,” I replied. “They’re at their best with their backs against the wall and the world against them. People say she’s a poor candidate. But she doesn’t lose many elections, does she?”

“But if she’s ill and she’s neck-and-neck in battleground states, will the party insiders try and replace her?”

“This isn’t a party leadership contest. She’s won her party’s nomination for the presidency of the United States. You’re going to have to pry it from her cold, clammy, hands. But if her health issues were serious, I reckon Joe Biden would be drafted. It’s an easy fit. And he plays well with the disaffected Democrats that have defected to Trump.”

“How would that work?”

“No clue. But it’ll be fun to watch. And imagine what would happen to US stocks if Biden replaces Clinton and Trump plummets in the polls. You’d see a huge dollar rally. Then the shift out of bonds would be genuinely bullish. The Fed wouldn’t have to raise rates. They’d go up all on their own.”