Buy banks to profit from the end of the bond bubble

Buy banks to profit from the end of the bond bubble

When you attend a conference called When Banking Dies, you don’t necessarily expect anyone to stand up and say “It’s time to buy the banks.”

But that’s exactly what Charlie Morris did on Monday.

In a day of intriguing and valuable ideas, it was something that stood out as particularly unique. Once you understand Charlie’s analysis properly, you realise that buying the banks could be both an opportunity to profit as the economy improves and a hedge against falling bond prices.

The first point to clarify here – something Charlie put me straight on in our interview on Monday – is that not all banks are created equally. There are good banks and bad banks: it all depends on how well they’ve dealt with the aftermath of the financial crisis, which is largely a function of geography.

But Charlie believes good banks, quality banks, could well outperform. That’s because “banks are the opposite of bonds”: as bond prices rise, banks fall.

Want proof? See the chart below, which Charlie used to explain the idea on Monday. It shows bond yields in blue – remember, as bond prices rise, the yield falls. The black line shows European stocks’ performance relative to the wider market. If the line falls, it means banks are underperforming: 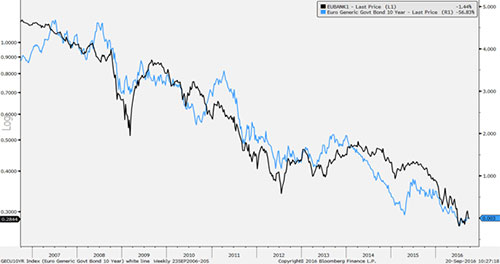 The two lines move almost in lockstep. As bond prices rise, meaning yields fall… banks underperform. It’s a logical idea when you stop to think about it. Falling bond yields hurt the banks’ profit margins. That translates into shares underperforming.

Why’s that important? Because it proves that banks are the opposite of bonds!

Bond prices have been rising for the best part of 30 years. If that trend reverses – and sooner or later it will, and when it does it’ll send reverberations around the world – high-quality banks could be the best way to play it.

In Charlie’s view, the most likely reason for bond yields to rise is because the overall outlook for the economy is improving. He doesn’t think the Bank of England needs to be “stimulating” the economy right now – the economy is just fine. As growth, inflation and moderate prosperity return, yields will rise and banks will rise with them.

Remember that idea. We’ll return to it periodically over the next few months to see if Charlie’s right.

A map for your money

That wasn’t the only idea Charlie shared in his presentation on Monday. To be honest, Charlie rarely has just one valuable idea at a time. He’s something of a lightning rod for new ways of thinking about and analysing the markets. Keeping up can be exhausting and rewarding in equal measure.

Back to Charlie. He finished his presentation by sharing a kind of money map – a way of understanding what’s going on in the world… and where your money should be to take advantage of it. Here it is: 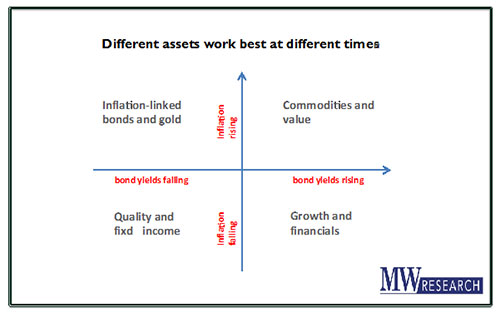 There are two ideas working in tandem here. One is what’s happening in the world, the other is your response to it. It’s a surprisingly elegant way of analysing the world and figuring out what to actually do with your money.

For most of the past three years, the world has been squarely in the bottom left quadrant – bond yields have been falling and so has inflation (the blue axes and red writing). That’s an environment you’d expect quality stocks and fixed income to perform well in.

But where are we going next?

Charlie believes that bond yields are going to start rising (look to Japan for leadership) and inflation will pick up. That starts to move us towards the top right quadrant. If that’s the case, he’d expect commodities and value to perform.

The key, though, as Charlie pointed out, is not to be in the wrong place. That means if the conditions are top right… you don’t want to be bottom left.

And it’s not necessarily a case of moving all your money into the corresponding quadrant. It’s more how much of your portfolio you allocate. You want to have a high exposure to areas that are likely to outperform in the conditions, and reduce exposure to areas likely to underperform.

This is the kind of idea that demonstrates how valuable it is to have Charlie on your side. He’s great at combining macro analysis with specific and actionable investment advice. Which is of course the whole point of our business: understand what’s happening in the world and use that understanding to help you protect and grow your money.