The Financial Times reports on the latest threats from Europe. Michel “Barmie” Barnier, the EU’s lead negotiator and former French minister of the environment and way of life, is getting creative. He claims a “hard Brexit” would lead to all sorts of disasters:

“More than 4m British citizens in the EU and European citizens in the UK faced with complete uncertainty about their rights and their future; the reintroduction of binding customs controls, which will inevitably slow down trade and lead to queues of trucks at Dover; serious disruption to air traffic; an overnight suspension in the movement of nuclear materials to the UK.”

Is it serious? Let’s break this down.

There are two types of issues to Brexit:

By combining the two, EU politicians are cleverly obfuscating what’s going on.

For example, by leaving the EU without an agreement on “rights”, Barnier is suggesting there would be a void. But Britain doesn’t need the EU to provide rights. It can provide its own rights. And do a better job. Potentially…

When it comes to British policies, Barnier wants to make Britain commit to a “level playing field” with the EU. That’s because he is worried Britain will do better than the EU on issues like tax policy, human rights, regulation, entrepreneurship and financial policy.

For Barnier it’s important that Britain remains as messed up as the EU, so that it cannot outcompete. After all, why would Britain have to stop EU migrants from coming into the country if the EU is a better place?

Then there’s the other issue – the relationship between the EU on things like trade, air traffic control and immigration.

Which begs the question, who will stop these things? That is the culpable person. Not the one who doesn’t want an agreement.

If the EU wants to stop trade, migration and air traffic cooperation, it will have to do so actively. And even then, people will trade in defiance of government restrictions. They migrate in defiance of them. And so on…

If the EU or UK seriously restrict trade, I will become a full-time smuggler.

But even then, people will notice the EU has plenty of trade and migration partners outside the EU with whom things work just fine. As does Britain…

Meanwhile, there’s a world outside the EU

How many of the top ten sources of immigration into the UK are EU countries?

No, not the majority. No, not half. Two. Two out of ten. Take out Ireland and it’s one – Germany.

While EU based immigration has boomed, non-EU immigration took a hit in the last decade and a half. Last year was the first time that immigration from outside the EU was less than immigration from inside the EU. There’s a big world out there. We’re missing out on a lot of productive immigrants by being in the EU. 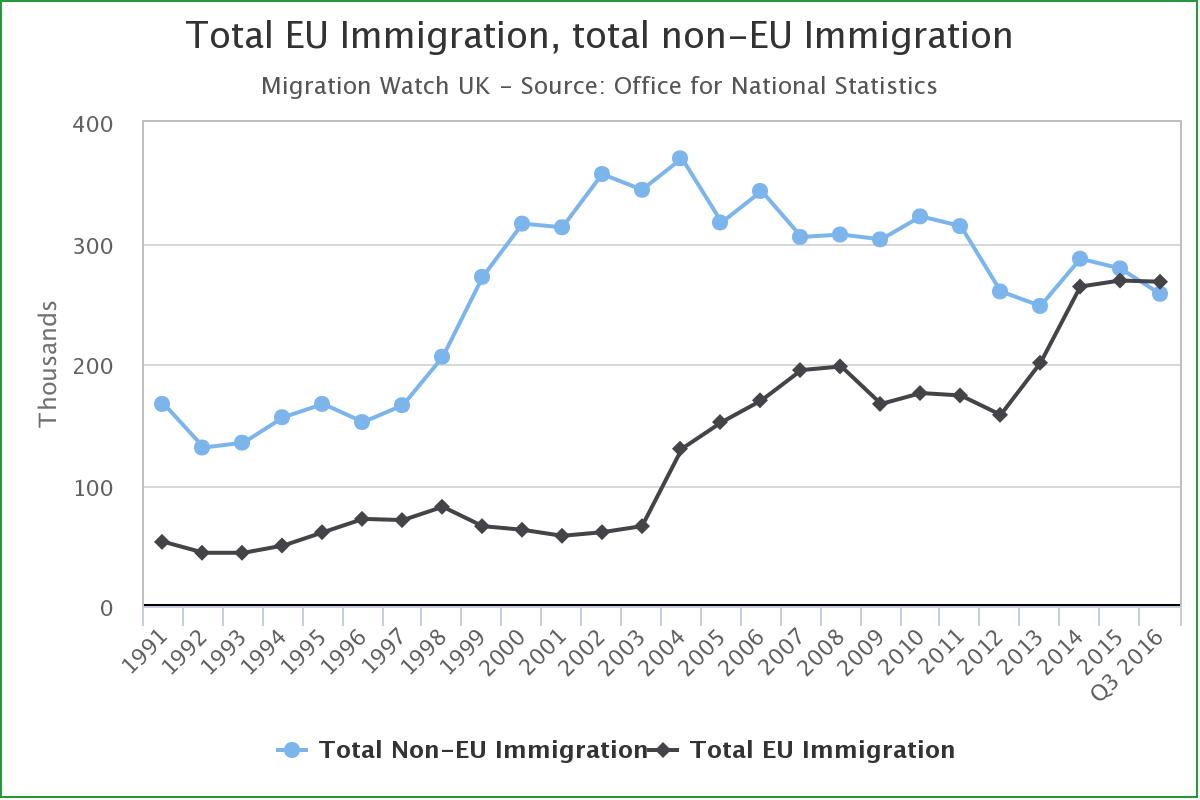 A slow Brexit is a good Brexit

The good news is Barnier wants the Brexit negotiations to go slowly. Everyone else seems in a rush.

Barnier is playing into our hands. A slow negotiation is one of the main themes you’ll hear about in Capital & Conflict over the next two years. The longer Brexit takes, the more negotiations stall, the more patient we are, the better. More on that tomorrow.

But first, there’s something you need to think about. If we leave the EU, are we still on the hook for a European banking system that’s heading for implosion? Do we still have to prop up the broke Greek government the next time its bonds crash?

Sure, we need to protect ourselves. But outside the EU, we aren’t tied into its mess under its terms. Doesn’t that sound nice?