The country on the cusp of herd immunity

The country on the cusp of herd immunity

You probably heard the news that Canada reported no deaths from COVID-19 last Friday.

The feat was heralded internationally in mainstream media, from CBS to Bloomberg to Daily Mail.

But strangely, I haven’t been able to find any celebration for the European country of more than 10 million people that reached the 0-death milestone two days earlier, on September 10.

Sweden has been treated with consternation from pandemic pundits around the world, after their controversial strategy to avoid lockdowns or severe social restrictions broke with almost the entire rest of the world’s.

In May, Wired decreed that Sweden’s no-lockdown strategy “has well and truly failed.”

Meanwhile Business Insider reported Sweden was launching an investigation into the failure of its COVID containment policy (in fact, the inquiry was into its strategy to protect nursing homes from infection).

The Financial Times ran an article in June titled “A Very Swedish Sort of Failure” while Open Democracy proclaimed: “The data is in: Sweden failed.”

In June and July, when most of the eulogies were being written on Sweden’s strategy, it was easy to look at Sweden’s significantly higher-than-average infection and death rate, and proclaim it to be a ghastly policy and humanitarian disaster. 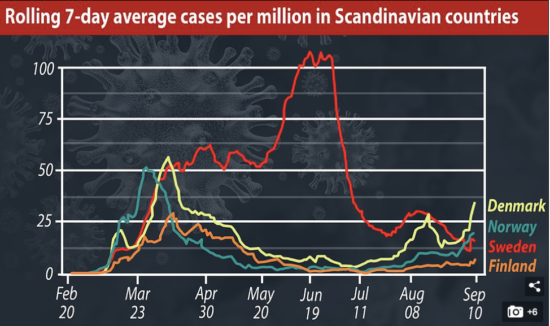 But the pandemic didn’t end it July, for Sweden or the rest of the world.

As you can see, last weeks day of 0 COVID fatalities wasn’t an outlier for Sweden. Over the last two weeks, the country has generally reported a number of COVID deaths daily you could count on two hands: 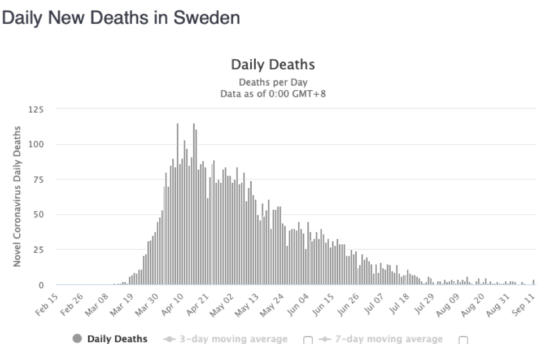 Sweden has reported just 2,705 new cases in the 30 days since August 12 – and that’s despite testing more than every during the last week.

After Sweden’s record testing last week, just 1.2% of results came back positive. That’s a level the country hasn’t seen since the first days of the pandemic in early March.

Record testing, showing record low infection rates, all in a no-lockdown atmosphere where the virus would be free to spread almost uninhibited… it’s suggestive of a milestone the experts tell us is months or even a year away.

If Sweden isn’t at herd immunity yet, these numbers suggest it’s very close to it.

Meanwhile, the country has been spared the worst of the economic damage associated with the lockdowns, contracting 4.6% in April.

Has it been worth it?

Critics will say here that Sweden’s unacceptably high fatality rate early on, when the virus ran through the country almost unchecked in the spring and summer, makes herd immunity a Pyrrhic victory.

It’s also a hair below Italy’s 589 deaths per million – all while escaping the brunt of the economic damage these countries have suffered.

Sweden’s epic slowdown in infections can’t be attributed to lockdowns, or social distancing.

And with Sweden’s chief epidemiologist Anders Tegnell even downplaying the role of masks, it’s not even clear that individual caution among responsible citizens was much of a factor.

In August, research  showing 15% of Londoners and 15% of Stockholm residents had antibodies was used to throw cold water on the idea of herd immunity.

If Swedish people were no more immunized to the virus despite months without lockdowns, the argument went, herd immunity could never be feasible as a way out of the crisis.

But that was based on a misunderstanding of how immunity works, and how our immune systems “remember” defeated pathogens.

Antibodies – proteins that latch onto specific pathogens to physically stop them from invading cells – typically fade after three months, though they usually reside in the body for months or years afterwards, capable of rising in the case of reinfection, according to immunologists.

Meanwhile, longer-living B cells are capable of producing fresh antibodies en masse in the event of reinfection – meaning low levels of antibodies are no indication of weakened or fading immune response.

Or, as Marion pepper, immunologist at the University of Washington put it, “All the pieces are there to have a totally effective immune response.”

You may have heard conflicting reports on this, since studies showing antibodies vanishing after three months have caused some panic about reinfection. But antibodies aren’t the real test of immunity – Memory B cells, which churn out antibodies when crossing paths with new COVID pathogens, are the foundation of immunity.

And these Memory B cells are around for a long while.

“Yes, you do develop immunity to the virus, and good immunity,” says Dr. Eun-Hyung Lee, immunologist at Emory University. “That’s the message we want to get out there.”

So when studies show that 15% of Londoners and Stockholm residents have antibodies, that’s likely only a reflection of people who have recently gained immunity.

Factor in the people who became immune more than three months from that August study – say, in March and April during the virus’s heyday – and the immunity figure is almost certainly significantly higher.

How much higher? Even the experts aren’t in agreement. But a world where 30% of people are immune from COVID-19 is very different from a world where 85% – or 5 in 6 people – can still get and spread the disease.

This is especially true since the people who get immunity first tend to be the people with the most social contacts – bartenders, students, teachers, nurses, for example.

But Sweden shows the uptrend could stop sooner than you think – lockdown or no lockdown.

PS While second waves force countries to institute new lockdown measures, Boris Johnson has to secretly feel thankful he has more than three years left before facing voters. This insulation is making a second lockdown far more likely – as is the exponential rise in COVID infections in Britain over the last few days. My colleague Nickolai Hubble has written extensively about what investors can expect to happen to their money as a second lockdown looms – to see details on his top investment to make in preparation, click here.