ABERDEEN, SCOTLAND – Earlier this week, somebody decided to inscribe the bitcoin blockchain with a bible verse.

“Do not be overcome by evil, but overcome evil with good – Romans 12:21” is embedded within a transaction on block 666,666, presumably to keep hell at bay. I hope it works.

Whoever it was that did it must’ve been pretty keen. They spent five times the average in bitcoin transaction fees to increase the likelihood of miners processing their transaction at just the right time, so that their message would make it into the sextuple-six block and not block 666,667.

In fiat terms, they spent roughly £36 in fees to make sure a payment of £230 would be processed faster – not exactly what you’d call “great economy”. And from my understanding, when data is imbued within BTC payments like this (using something called the OP_RETURN function), the bitcoin which carries the information can never be spent again – it has been “burned”. So they may have spent the lion’s share of 300 quid to get that line branded on the blockchain for posterity. But when you consider how long bitcoin may be with us, that could be a bargain…

Imagine if you had the opportunity to write whatever you wanted on the foundations of the Bank of England, the European Central Bank, or the Federal Reserve – visible to anyone who looked closely enough, and recognised as part of the history of the building, for better or for worse.

What would you write? Let me know here. Send in something witty enough and perhaps I’ll etch it into the blockchain as this individual has done. “Boaz wiz ‘ere” is a bit underwhelming – I’m sure you can come up with something better.

The divine right of regulators

I assume the biblical bitcoiner in question is using the New International Version (NIV) of the bible, as that’s the most popular edition with that same wording (the King James Version says “Be not overcome of evil”).

It’s a curious choice of verse. While that line is a winner, it’s very hard to ignore in this context the verses which come immediately after it. Romans 13 forms a foundation to the divine right of kings – the idea that our earthly authorities are carrying out the will of heaven, and thus should always be obeyed. To rebel against the will of the authorities is thus to rebel against the divine, and begs for judgment and damnation. This argument has been used throughout the history of Christendom to justify the actions of monarchs, regal authorities, and more recently of governments.

As the chapter goes from the NIV:

In the King James Version, the rulers in question are described as the “the powers that be” – which leaves a nice bit of room for interpretation. But the NIV used by this bitcoiner goes so far as to refer to them as “the governing authorities”, which doesn’t leave much wiggle room for who exactly should be obeyed at all.

Submission to authority isn’t exactly the first thing that jumps to mind when I think of bitcoin, which is why I found the use of that verse from Romans which immediately precedes Chapter 13 a little out of place on the blockchain. Perhaps the individual who did it just looked up some bible quotes and rattled off this one because it sounded good.

Then again, perhaps it’s time for bitcoiners to be studying Romans – for “rulers bearing the sword” are certainly heading their way. Janet Yellen, former empress of the Federal Reserve now turned US Treasury secretary, said on Tuesday that cryptocurrencies must be “curtailed”, following Christine Lagarde at the European Central Bank calling for global regulation of the crypto space and accusing bitcoin of “funny business” last week.

It’s easy to see how a government crackdown on BTC could blast the bitcoin price, and make its thriving digital ecosystem dysfunctional. But when you consider just how much bitcoin is now going into the hands of regulated financial institutions, I wonder how much of an impact regulation would have on its price. Institutions welcome regulation as it allows them to invest in assets previously too wild to acquire – and they’ve been buying handfuls already.

The Grayscale Bitcoin Trust ($GBTC) bought 16,244 BTC (over $600 million worth) in one go on Monday, hoovering up the equivalent of 18 days of fresh mine supply all at once. Grayscale alone now controls 3% of all bitcoin in circulation. And it’s an investment trust that consistently trades at a premium to its actual value – we don’t yet even have a proper low-cost bitcoin ETF that would serve broad market demand the same way we do for the likes of commodities and other asset classes.

Of course, regulators could just prevent the creation of any such ETF, and start cracking down hard on the likes of Grayscale, but I think the tide has grown too strong for them to hold it back. Digital assets are here to stay – the question is more about how our “rulers” will co-opt, channel and divert them rather than how they will be eradicated.

Whether the bitcoiner who etched that quote from Romans 12 on to the blockchain bothered to read the next verse and discover the divine right of kings, I don’t know. But it’s pretty clear that the “kings” in question aren’t familiar with chapter 13 either.

As verse 8 quite clearly states in the NIV:

Let no debt remain outstanding, except the continuing debt to love one another, for whoever loves others has fulfilled the law.

Janet Yellen, whose ultra-low interest rate policy at the Fed fuelled a massive increase in debt, now takes the reins of the US government’s entire debt pile – almost $28 trillion. 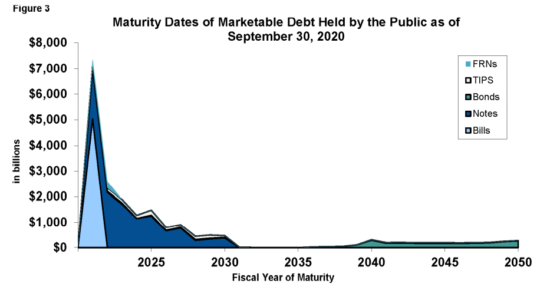 The Treasury department of the Biden administration is going to have one hell of an adventure. For $13 trillion – despite what you may have heard from recent government announcements – is actually still a lot of money.

Janet Yellen will have quite a decision to make – after all, she should let no debt remain outstanding. Perhaps we’ll hear the Good News in the next four years that they’re paying it down, trillion by trillion… but I wouldn’t hold your breath.