Remember that bizarre period back in April when oil prices briefly dipped below zero?

It was a global first. Aeroplanes sat on the tarmac. Working from home became the norm (at least in industries where it was feasible). Pubs and bars were boarded up.

Since then, politicians across the world have been singing the praises of a “green recovery”.

It’s touted as the clean, efficient and moral way out of our current economic rut.

Great for the environment, not so for the oil price. 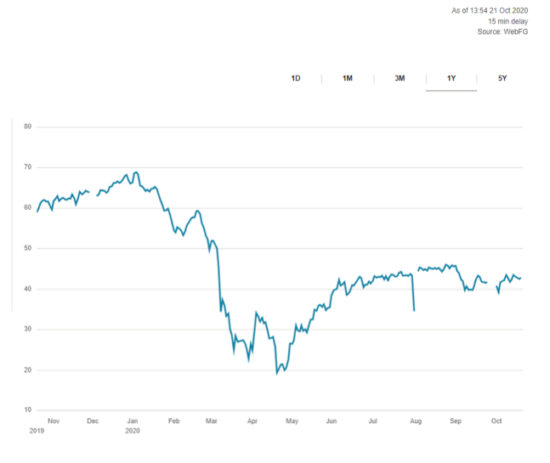 UK-based oil major BP published a report in September detailing three potential scenarios for the world’s energy transition. All three of them see demand for oil falling over the coming 30 years. Nothing too surprising there.

What was surprising, however, is that the “business as usual” scenario – in which the transition towards renewable energy continues at the same pace as it did before the pandemic – forecasts a short-term rebound, before plateauing from the early 2020s onwards.

And that’s the conservative prediction. The other two scenarios assume an even quicker decline.

But I’m not convinced that oil’s days are over just yet. In fact, a spike in the oil price isn’t beyond the realm of possibility.

And it’s not just because of the pandemic, either.

Oil prices were riding high. WTI was flying, at around $106 per barrel.

Fast forward to February 2016, and the picture looks very different. At its lowest point, WTI cost just $26 per barrel.

This may seem like small fry compared to the price collapse we saw back in April, but what happened here could still come back to bite us.

Why did the oil price crash then?

There are two main reasons. First, US shale was taking off. Efficiency gains meant that the breakeven price for shale rigs was lower than ever. And a shale rig can be brought online far faster than conventional drilling operations.

By the end of 2014, the US was producing around 9.6 million barrels per day (bpd). But prices had fallen to around $60 per barrel, and a report by Scotiabank estimated that – even with the industry’s efficiency gains – the average rig’s breakeven price was $68.

The other side of the crash was down to Saudi Arabia. For a variety of reasons – to knock out of US shale, to punish Iran, and to push other OPEC members to keep production in line with agreed quotas – the Kingdom flooded the market. Demand was already weak. The oil price crashed.

So if this happened six years ago, why does it matter now?

Because it marked the start of a decline in capital investment. Oil production is a capital-intensive industry.

That’s one part of the puzzle. The other reason I think the oil price could follow the path of Lazarus is ESG concerns – that’s environmental, social and government.

In the West, we’re learning to love ESG investing. Making money and feeling good about it? Sign me up.

Just last month, ESG index funds hit $250 billion, with the US just making up 20% of that amount – meaning there’s still plenty of runway for growth.

But for the oil industry, it’s a problem. Increasingly, major institutional investors and asset managers are washing their hands of industries linked to fossil fuels.

Last year, Norway’s parliament voted to force its sovereign wealth fund to phase out its $10 billion worth of fossil fuel stocks. Various pension funds for local councils in London have been doing the same. BlackRock, the world’s biggest asset manager, has already dumped coal stocks, so it’s only a matter of time before it does the same to oil majors.

And in May this year, Natixis, a French bank, announced that it would no longer fuel shale or oil projects.

A survey of investors conducted by Octopus Group last year found that fund managers are planning to triple their divestment of fossil fuels over the next ten years. Royal Dutch Shell now lists divestment campaigns as a material risk to its financial health.

So companies looking to raise capital for oil projects could face new hurdles as investors and banks increasingly wash their hands of fossil fuels.

This isn’t such an issue now – after all, we’re in the midst of a second wave here in the UK – but when the global economy really starts to get going again, underinvestment in conventional oil could come back to cite us.

But what about shale? Unlike its counterparts in OPEC (or OPEC+, since Russia joined the party), US shale companies aren’t subject to the whims of a cartel’s supply quotas.

They’re capitalist, red in tooth and claw. They’ll frack away until it doesn’t make financial sense to do so, right?

After all, even if 60% of US shale rigs have closed this year, shale bounced back after the glut in the oil price circa 2016.

This is true. And it may do it again.

In an interview with the Financial Times, Wil VanLoh, a top executive at Quantum Energy Partners, a private equity firm which boasts a portfolio of companies making up the second highest drilling capacity in the US, has warned that the country’s fracking boom has severely drained the country’s reserves.

Now, he doubts the country could produce the 13 million bpd it was pumping out earlier this year.

Another big obstacle to shale, however, will be investment. The sector’s already been gutted twice in a decade, and thin profit margins combined with a gloomy outlook on oil prices (even among OPEC and BP) aren’t exactly a magnet for potential investors.

Are capital markets about to welcome shale companies with open arms?

My guess is no.

So where will demand come from?

I recall speaking to the CFO of an oil company at a conference in Nigeria last year. We were discussing the shift towards renewables, and what it meant for oil’s prospects. And he made a good point and demand that’s stuck with me since.

Yes, oil’s long-term future isn’t rosy. But much of the developing world – the fastest growing in terms of economies and population – isn’t going to transition away from fossil fuels overnight. Energy needs are rising exponentially in countries like Nigeria, and funding renewable energy projects isn’t necessarily a top priority.

China has already buoyed the oil price over the past few months, as its imports doubled between January and July compared to the same period last year. India – which, unlike its northern neighbour, is struggling to control the virus – is expected to outstrip China’s demand for oil by 2030.

Last year, over 60% of worldwide oil demand came from emerging markets. The International Energy Agency estimates that Asia alone will account for 77% of oil demand growth through to 2025.

Even if we in the West continue to work from home and holiday domestically in the long term, emerging markets are set to keep on pushing up demand.

So, with under-investment in oil looking likely and shale’s revival looking less promising, we could see a squeeze on the supply side. On the demand side, emerging markets could continue to push up prices. The result could be a pretty aggressive spike in prices.

PS Regardless of what happens to the oil price, a shift towards renewable energy seems inevitable. And if you’re interested in growing your money through the green energy revolution, then my colleague James Allen, editor of Exponential Energy Fortunes, may be able to help. He’s recently closed a position capturing returns of over 800% for readers, so when he talks, I listen. Find out more here.