THE ARTISAN, STAFFORDSHIRE – “Children have one kind of silliness, as you know, and grown-ups have another kind” – C.S. Lewis

May I present, dear reader, the other kind:

Italian government borrowing costs back below zero,
and heading lower

In Wednesday’s note Through the wardrobe I asked you what might drive a man to lend money to the Italian government for three years at a guaranteed loss and without a single crumb of an interest payment along the way.

I exhausted my own imagination wondering what could incentivise such strange behaviour. To my eyes, the only real saving grace of a bond that ultimately pays nothing when repaid years in the future is the interest payments it’ll yield along the way.

But a bond that doesn’t make any interest payments whatsoever (zero coupon) and will stay pay less than nothing when the debt comes due… that’s harder for me to understand.

Why not just own gold? After all, it’s what our own Charlie Morris over at The Fleet Street Letter Wealth Builder says the shiny stuff trades like a “zero coupon perpetual bond issued by God”– a debt that pays no interest, due for repayment on St Never’s day. And he can make a compelling argument for it too – the gold price really does jump around in line with bonds. When so much money crowds into lending, that the interest you can earn on loans goes down, gold’s inability to pay any interest becomes less of a problem.

Interestingly, the gold price in euros (blue line) bottomed and has began climbing aggressively ever since September 2018, right after Italy’s borrowing costs blew out (green line): 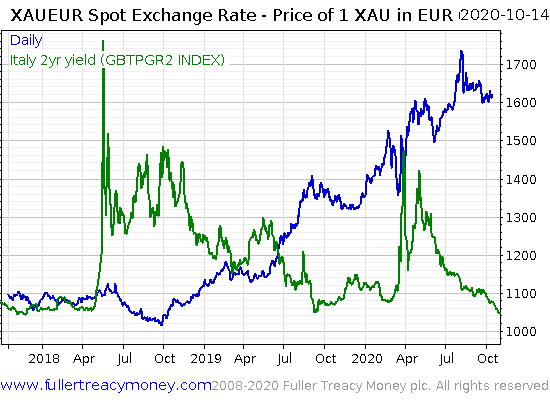 Looks like gold investors in Europe got the green light after the European Central Bank committed itself to the task of creating as much money as necessary to keep Italy’s lending costs down. Hard to imagine where Christine Lagarde might draw the line now – especially as her alma mater, the International Monetary Fund, is now saying austerity is no longer necessary for countries that can rinse the debt market for more money.

From the Financial Times:

Most advanced economies that can borrow freely will not need to plan for austerity to restore the health of their public finances after the coronavirus pandemic, the IMF has said in a reversal of its advice a decade ago.

Countries that have the choice to keep borrowing are likely to be able to stabilise their public debt by the middle of the decade, Vitor Gaspar, head of fiscal policy at the fund, told the Financial Times. That would mean they would not have to raise taxes or cut public spending plans…

The IMF’s words will be seized upon in the US and across Europe as giving the green light to countries to invest out of the recession, rather than tightening their belts as happened in the previous decade.

The fund’s advice is a reversal of the message given in the same publication a decade ago at the equivalent stage in the financial crisis. Then, it warned that “many countries face large retrenchment needs going forward”…

This time around, more needs to be done to foster a strong recovery before considering the health of countries’ public finances, the IMF emphasised.

With the ECB still “good cop”, and the IMF no longer “bad cop”, it looks like eurozone countries are facing a “good cop, good cop” scenario when it comes to borrowing more money. And the gold market knows it.

Anyhow, on Wednesday I asked you if you could think of any other reasons a man would buy Italy’s three-year, zero-coupon, negative-yielding bond other than the seven(ish) that I could dream up.

I received some interesting responses. Quite a few of you think money launderers may be responsible:

Your money is ‘warm’, so [you] launder it into the Italian government for a few years and let it cool down.

I lived there for years, this is an old trick, easy to do and hassle free. The Italians think of everything…now ok only a few will make use of this trick you say…….you’ve no idea how popular it’ll be!

Not a bad idea. The government’s less likely to come after you for laundering “hot” money if it’s relying on you to keep the lights on…

Tax avoidance, with the upside of making a buck if interest rates go even lower in the eurozone, was another possibility on the table:

… if bonds are negative yielding anyway and I can buy a zero coupon for 3 years at the same negative yield as the market for other coupon bearing 3 year bonds I get no coupon to be taxed and am left with a small loss which will be better than alternatives.

At the same time if rates go more negative I get a tax free gain. Obviously I have my money in a junk currency and one of the worst credits in Europe, but that’s another story.

Another reader reckoned it could just be a really expensive Public Relations – or I guess, “Market Relations” – campaign:

[The bond buyer]’s working for the ECB and wants to convince the market that negative rates are just the job for the new normal.

Probably the most imaginative answer was that the Chinese Communist Party is responsible:

What about a shell company owned by the Chinese Government [is buying the bonds]?

Buy big, wait for the crash and ‘own Italy’

I’m rather doubtful, I’m afraid. Developed nation debt doesn’t come with the kind of strings attached for the borrower like it does for emerging and frontier markets.

As the old saying goes, “Owe the bank £100, that’s your problem. Owe the bank £1 million, and that’s the bank’s problem.” Italy owes €2.5 trillion. That’s a lot of problems, and the Italian government has a lot of historical experience at trashing those who dare to lend it money. I trust it hasn’t lost the skill, and expect we’ll see it displayed with panache this decade.

PS Over at Exponential Investor, Kit Winder has a question for you…

If you could only own one single stock for 50 years, what would it be?

All you can do is collect dividends.

Which would you choose?