In yesterday’s note, we explored how inflation – almost forgotten as a threat by mainstream investors – may finally be brewing in the background, ready to return and wreak havoc. Now that it’s not just central banks stuffing money into the financial system, but governments ramming it into the real economy, one has to wonder if a monetary Rubicon has been crossed.

Should high inflation in everyday goods and services return in a meaningful way, it will flip the investing world as we’ve known it for the past several decades on its head, a thesis we illustrated with excerpts from an article Warren Buffett wrote back in 1977. Buffett was describing how inflation “swindled” investors in stocks in the middle of the wilting, stagnant era of 1966-82 when the stockmarket went sideways and while prices soared.

We’ll come back to the topic of inflation in due course. There’s plenty we’ve yet to cover on just how this investors’ nightmare could manifest itself in the near future, and we’ve also yet to explore how those with their capital in Britain are uniquely positioned to defend against it… but we’ll get to that tomorrow.

Today, there’s a more pressing event for us to consider, with a Buffett saying of its own to match: that it’s only when the tide has gone out, that you discover who has been swimming naked.

You can bend this metaphor around several different investing scenarios. It’s only when real interest rates are rising, and debt is becoming more expensive, that you discover which companies can actually cope under pressure and are worthy of further loans in future. It’s only during bear markets that you discover who is a good active investor, and not just a cheerleader for higher stock prices.

But at the moment I think of the saying in a slightly different manner.

A while back on our market broadcasts I pondered whether the “sudden stop” in the world economy created by the WuFlu lockdowns would forcibly reveal grand cases of corporate fraud. With business operations at a standstill across all manner of sectors, white-collar crime that could be papered over and kept hidden from view when the business was ticking over has nowhere to hide.

Similarly, businesses run like a Ponzi can no longer be fed in such an environment. You can’t inflate sales volumes, earnings, profits, etc, to convince investors to keep giving you money… when there aren’t any to inflate because customers and salesmen are forbidden from interacting with each other.

At the time of that broadcast, Luckin Coffee ($LK), labelled as “the Chinese Starbucks” by bulls, had just been revealed to have committed massive sales fraud (there’s probably no point in me giving you the ticker actually – the Nasdaq is in the process of delisting the company from the exchange).

But now, a much, much greater fraud has been revealed… 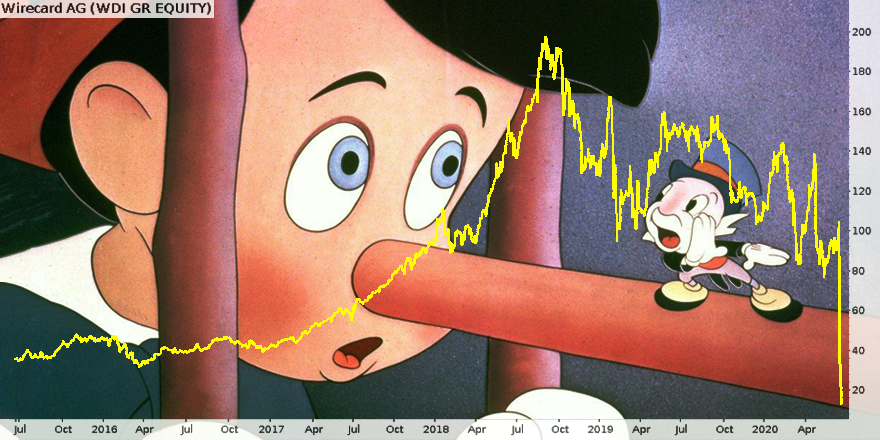 It is here that we come to the case of Wirecard ($WDI), the German fintech stock that has lost 80% of its value over the last seven days.

The CEO, who resigned on Friday, is now under arrest, after at least 1.9 billion euro has seemingly gone astray…

From the Financial Times:

The prosecutors are accusing Mr Braun of artificially inflating Wirecard’s balance sheet and the company’s revenue in an attempt to make the company look more attractive for investors and clients. The prosecutors suspect Mr Braun did this in conjunction with others. A spokeswoman for the Munich prosecutors’ office told the Financial Times that the company’s former management board was under investigation…

The arrest comes after Wirecard on Monday warned that €1.9bn of cash on its balance sheet probably does “not exist” and disclosed that it had previously mischaracterised its biggest source of profits.

The company added yesterday it was trying to work out “whether, in which manner and to what extent such business has actually been conducted for the benefit of the company”. It withdrew its most recent financial results and said other years’ accounts may be inaccurate. Shortly before his resignation last Friday, Mr Braun told investors that Wirecard might have become the victim of a case of “fraud of considerable proportions”.

While the collapse of the share price and the CEO arrest make this all seem very sudden, the self-employed policemen of the market – the short-selling community – have been sounding the alarm on the company committing fraud for years.

(The German regulator – BaFin – not only turned a blind eye to Wirecard’s crimes, but banned short-selling of the stock and filed criminal complaints against the short sellers and journalists casting light on the company’s crimes on the grounds of “market manipulation”. Go figure.)

It could just be a coincidence that Wirecard is collapsing in the wake of the WuFlu – and that the weight of the fraud would have been too much for it to bear without the lockdowns, but I’m not convinced. The lockdowns have rolled the corporate world over – and are exposing the worms beneath. I don’t think Wirecard will be the last major company exposed as a result – it may not even be the biggest…

But that’s all from me for now – back tomorrow.