Can we beat the Americans at underage gambling as well as drinking?

Can we beat the Americans at underage gambling as well as drinking?

Who better to express “animal spirits” in the market than kids entering their teenage years?

We’ve written quite a few times about the commission-free trading app in the States called Robinhood, which is very popular amongst youngsters. Now this was just a pair of Twitter posts, and so this story could be made up, but it’s worth a look just for the amusement angle: 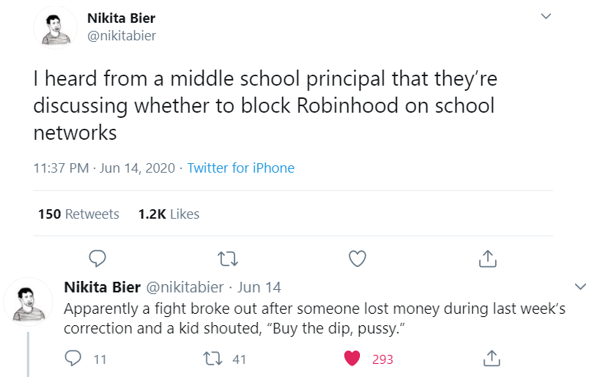 My anticipation for the arrival of Robinhood in the UK grows ever stronger. Will such fervour infect the kids of the UK and turn the FTSE and AIM into a punters’ paradise? Or is the youth in the UK more reserved, and this speculative frenzy being exhibited across the pond is yet another form of “American Exceptionalism”? Considering we’re so much better at underaged drinking than the Americans are, outperforming them at underaged gambling should be a cinch…

Just how much of the rally is borne of adolescent hormones cannot be discerned, but the white froth foaming up in strange niches of the market is becoming increasingly visible. Eoin Treacy gave yet another wild example of this incredible speculative spirit that has taken hold in a note to his subscribers last week:

A Chinese company that provides real estate services surged on Tuesday. It jumped 1,191% and gave up the whole advance on Wednesday. The reason for the move is because the company’s name, FANGDD, is similar to the acronym for five of the world’s most significant tech companies, FAANG. That’s evidence of some pretty frothy trading.

When we have investing neophytes on Twitter, trolling people like Warren Buffett, we have to question what exactly is going on. The answer is multi-faceted I’m afraid.

Cabin fever means people are sick of being stuck and home and are now much more risk tolerant than they would be normally. That’s feeding risky behaviour among the population at large but also in the stockmarket.

The massive supply of assistance provided by central banks and governments has lent a massive helping hand to traders, which has led to significant upside on markets. There is a clear risk-on sentiment permeating markets at just the same time as many stockmarkets are either at new highs or have recouped much of their losses…

But despite all the froth… Charlie Morris is going in.

And he’s not just following the crowd into the tech stocks… he’s jumping right in at the deep end, not even into emerging markets, but to the frontier.

Indeed, he’s actually sold his tech exposure in The Fleet Street Letter Wealth Builder in order to finance his next big play… in Africa.

That’s a bold move and a half right now. Don’t get me wrong, I think Africa represents a huge and very overlooked opportunity for investors over the long term: the continent is pretty much the only one in the world with decent demographics, the advent of mobile technology is allowing it to leapfrog the need for expensive old infrastructure and develop much faster, and of course it’s incredibly rich in resources.

The reason I say it’s a bold move is because if this euphoric rally we’ve experienced gives out, and the global investment market catches a fright, capital gets sucked out of the riskiest sectors first, and the hardest.

The same applies in the currency markets. Some of the flimsiest currencies in the world are in Africa, and when markets go “risk-off”, they can rapidly devalue against the “harder” currencies of developed nations, which in turn crushes the profitability of businesses operating there in sterling terms. The company in question operates in some of the most and least developed countries in Africa, which mitigates this somewhat, but the risk is still there.

But Charlie has decades of experience trading his way through no less than ten financial crises, and he has strong conviction we’re on our way out of this one. Indeed, he’s made such a good case for the company, I’m tempted to buy the share myself.

As I say, I believe Africa is brimming with opportunities for investors with a long-term investment horizon. Especially when you compare the room for growth across Africa nations against the capacity for growth in advanced economies, like the overdeveloped and hyper-mature state of central Europe.

With ever declining growth and yields in developed markets, it’s only a matter of time in my view that large investors head to Africa in search of positive returns in the years to come – the investors who effectively allocate their capital first will have a killer first-mover advantage.

The only problem is, it’s not only investors that are heading to Africa – but mercenaries and military forces too. The big market players will be scrambling for Africa as the “hot” elements of Cold War II are gearing up to fight over it…