Some of you may remember today’s letter, which I first wrote back in April. I’m re-publishing it today as I’m currently working on a related little side project which needs a bit more polish.

While April feels like an awfully long time ago now, my views I shared below have not changed. In fact, my conviction in the value of a certain shiny metal has only grown stronger…

Amid the WuFlu chaos…

The escalating and ever more visible Second Cold War…

And as we all slowly go insane in isolation…

We take a moment here in lockdown to admire something shiny in the sunlight. 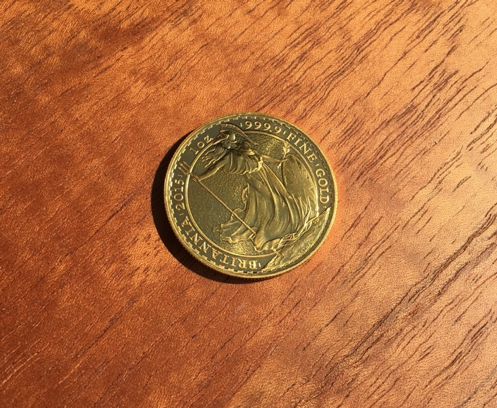 That coin is the first investment I ever made. I look at it every now and then like it’s a relic, as it brings back a lot of memories.

When I was unemployed, having finished school and turned down a place at university, I was somewhat lost. I had no idea what I really wanted to do, and my qualifications frankly sucked – anywhere I did want to go was very unlikely to accept me.

I did want to be a writer, but that seemed like a pipedream: very hard to get into, very cliquey if you do, and even then the majority of writers – especially novelists – are broke as hell.

So I roamed around doing lots of odd jobs. I worked in door-to-door sales, retail, and a load of basic admin roles. My interest in the world of finance came all at once, much later on.

Like many folks without much cash, during these in-between jobs and unemployment, I dreamed up a list of things I would buy once I saved up enough money. And at the top of that list was gold.

Once I had saved up a grand’s worth of savings, I vowed to myself – money I was confident I could afford to put away and wouldn’t have to draw upon in a pinch – I would buy an ounce of gold. An ounce of gold back then wasn’t even a thousand pounds, but I knew the price was volatile, and a thousand pounds seemed like a good place to draw the line and start investing. And while the gold price wasn’t at a thousand pounds at the time, the reason I wanted to buy it in the first place was because I thought it was going to go up in value.

Though my interest in the financial system itself arrived very late, I’d been interested in stocks ever since I was a kid, when my dad had showed me the markets section of the Financial Times and explained that simply by owning a “share”, you would be paid a dividend. It seemed to me like free money – why, I wondered, didn’t everyone buy these things to earn the dividends for nothing. Indeed, why wasn’t my father?

Sometime after that, though I can’t remember exactly how long, I was told that the best time to buy shares was when everyone else was panicking.

While I didn’t have any money as a kid, I nonetheless took this idea to heart and urged my parents to buy shares in Cadbury during the salmonella scare, and shares in BP in the immediate aftermath of the Deepwater Horizon oil spill. They didn’t take my advice, something I occasionally chide them on, but in all honesty, both were more short-term trading opportunities than investment strategies – and if you’re buying a stock like BP, you’re normally in it for the dividends, which takes time.

As a grown-up, with all this pent-up demand I had for investing all stored up inside, I was keen to finally start buying the blasted things, and had a wish list of investments I wanted to buy when I could finally scrape together the cash. But before I got to the risky stuff, I wanted something solid. And shiny.

It was a chart of the gold price over multiple decades that had hooked me originally – I didn’t even understand much about fiat currency debasement back then. Not really. Again, this was well before I became curious at all in the way money and our financial system works.

And to be honest, I don’t think anyone really understands gold now. It holds a mystery in its allure which is one of the key reasons I think everybody wants it, and values it. There’s something primordial about its lustre – I suspect we carry some ancestral memories of murdering each other for it when we were savages within our psyche somewhere. Those of us classed as gold bugs maybe carry more of these memories than most. But even that doesn’t explain why we value it so much in the first place.

Charlie Morris, who’s the closest we have to an expert when it comes to the analytics of gold here at Southbank Investment Research, just sums it up with a knowing expression and the word “shiny”. Tim Price, a gold expert who takes a more traditional approach, described it like this recently:

For thousands of years, investors looking to protect their hard-earned capital in real terms have sought safety in gold. We may have whizzier technology today than in the days of the Phoenicians, the Egyptians and the Hittites, but gold’s allure remains unchallenged. (There’s also bitcoin and the other cryptocurrencies, but part of the attraction of bullion to me is its sheer physicality and indestructibility. You can put your faith in paper, but I prefer a little more substance to my financial security.)

… Putting any specific price on gold in US dollar terms is in any case putting the cart before the horse. We know what an ounce of gold is and what it comprises, in the same way we know what a kilogram or a metre represent. But what is the US dollar worth? And as Voltaire is believed to have remarked, “Fiat currency always eventually returns to its intrinsic value – zero.”

It’s for these reasons that I believe everyone should own gold – even if it’s just a little.

I didn’t really know exactly what I was doing when I was dreaming of buying gold, or when I finally scraped together enough savings to buy some – that 1 troy ounce Britannia – for a little over £700.

But I had a hunch I was doing the right thing. And in retrospect, I’m proud of my decision to forego spending so I could afford it (my girlfriend at the time certainly wasn’t understanding or approving of my “fiscal austerity”).

Gold takes vast quantities of energy to bring it out of the ground, refine it, and meld it into bullion. And then after all that, it doesn’t do anything. We just look at it. Gold is human effort in physical form, a consummation of expended energy, highly concentrated and condensed into a shiny object that pleases the eye and is reassuringly heavy.

Buying it isn’t easy. And it’s not meant to be. But it’s worth it.

That coin is the first investment I ever made. When I die, I expect it will remain one of my best.