Well dear reader, the results are in.

This week, we’ve been exploring the prospect of another nationwide lockdown brought about by a second wave of WuFlu. It’s a heavily consequential matter for our lives, let alone our investment portfolios. And yet despite its significance, we have little certainty as to whether this will come about.

As I’ve been writing over the past few days, my colleague Nickolai Hubble sees the possibility of a second wave and the resulting lockdowns as too devastating too ignore.

I wanted to know how many of you are expecting another UK-wide lockdown to be imposed – and polls are back. It’s no landslide, that’s for sure – 41% believe it’s coming, 59% believe it ain’t. As I explained in yesterday’s letter, I don’t think the government is gonna do it, but that’s just my gut. Only time will tell – and considering the immense ramifications of another lockdown, it’s worth having the adequate preparations in place, just as insurance.

On the topic of insurance, we turn to my favourite kind: gold, that asset you own just in case everything goes awry. As many things have been going awry, it’s no surprise that the price of this insurance has been going up an awful lot. But it was going up so fast, that I told you I thought a dip, a “shakeout” was approaching. That dip has since arrived – the question now becomes how long does it last, and when does gold begin fighting for the all-time high spot again.

Now, remember that “voldatility” dynamic I explained a few weeks back?

This may be because market participants are used to the gold price going down or simply expect it not to increase for some reason, so higher prices catch them unawares. But for whatever reason, the link between the two isn’t severing, even in the face of some pretty major price moves. The hefty whack gold received over the past week – which would have sent volatility in the stockmarket soaring – soaring, stopped gold volatility in its tracks, pushing it flat: 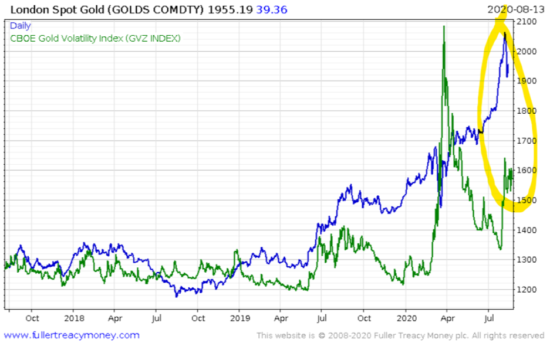 Mohammed El-Erian, the acclaimed investor over at PIMCO made an interesting observation about gold recently in the Financial Times, where he compared the metal to a decidedly different asset…

From the FT, emphasis mine:

Gold is… collecting quite an unlikely cast of backers in addition to the usual bugs who worry about currency debasement and geopolitical shocks. Some believe it will protect investors against further depreciation of the US dollar; others want it as a hedge against a global economic depression and a collapse in stock markets that, already, are stunningly decoupled from corporate and economic realities. Today’s gold camp even manages to attract those looking to protect against competing outcomes: deflation and inflation.

Gold is not the only asset to have developed this multiple and seemingly bipolar personality. Big Tech stocks have also been seen as offering everything to everybody. They promise growth based on the shift from physical to virtual activities in the pandemic, but also downside protection because they have massive cash holdings, low debt and positive cash-flow generation. The collapse in nominal yields on government and safe corporate bonds is also leading some investors to ask whether non-investment grade “junk” bonds can be a safe place to park their money.

Underpinning these contradictory developments is investor faith that central banks will protect them from big losses by continuing to intervene whenever markets slide. Gold is evolving into a “must-have” asset. That drives the price upwards as the pool of potential buyers shifts from a small group of quirky bugs to the much larger pool of investors seeking risk mitigation…

Interesting fella, El-Erian. I remember a while back he openly described how as the financial crisis began, he could see just how dire the situation was and so rang his wife up, to give her some simple instructions: get to the bank and withdraw as much physical cash that you can carry. Folks like that understand gold.

Charlie Morris, the fund manager over at The Fleet Street Letter Wealth Builder has long argued the case for a “Gold & Growth” portfolio, where the only holdings are bullion and tech stocks. We’ve covered this a few times in Capital & Conflict, most recently in The “Dickens” portfolio (8 July)… but this is the first time I’ve seen anybody start to compare the assets as similar. If that catches on, those investors who decry gold for its lack of… well, doing anything, will be really mad.

With the total quantity of gold above ground in the world estimated at 6.1 billion troy ounces, that would put the current market cap of this particular “tech company” at over £9 trillion pounds. Food for thought.

PS. Next week, we’ll be taking a closer look at something a little closer to a tech company, thought still not quite the same thing – bitcoin. Behind the scenes at Southbank a vast bitcoin project has been underway, which I’m looking forward to be sharing with you in the near future. But in the meantime, to get a quick refresher on the strange yet powerful asset that is BTC, take a look at this crash course from Kit Winder over at Exponential Investor.