I don’t know anybody who’s used the lockdowns as an auto-shopping opportunity, but there’s gotta be some out there…

I was struck by a statistic published recently that car sales fell by 24% in Europe over the last year – the biggest drop since records began in 1990. It’s an incredible fall, but I do wonder why it wasn’t even steeper – who was it that was buying new cars? Nasdaq investors cashing out to buy a new Roller? Bitcoiners buying Lambos..? I’m mystified.

I think there must be an angle on commercial car ownership that I’m missing here. That, or something to do with long drives becoming very fashionable during lockdown.

But I digress. In this short note to start us off this week, there’s another side to this car-demand stat we should be paying attention to.

If you’ve been reading this letter for a while, you may already know what I’m about to talk about. Yep, it’s those pesky platinum group metals (PGMs) again – the sector that’s close to my heart, but more importantly, vital to new car production.

As you likely already know, diesel and petrol cars have catalytic converters fitted to their exhausts to keep their emissions within legal limits. These converters contain PGMs, which are consumed in the process of making the fumes less harmful.

Car manufacturers have little choice but to buy these PGMs if they want to sell fuel-burning cars. They can make their converters more efficient and require less precious metal, or swap a particularly expensive metal out for a cheaper one, but one way or another, if they want to comply with the law and sell cars, they need to buy the likes of platinum, palladium, or rhodium.

(NOTE: There was a contingency plan hatched in the late 2000s to replace platinum in catalytic converters with gold (which doesn’t sit in the PGM family) after platinum prices suddenly exploded, but I don’t believe this was ever acted upon. And considering how cheap platinum has become compared to gold now, I don’t expect we’ll see it rolled out anytime soon…)

The car manufacturing industry accounts for 65% of all PGM demand – the sector is hugely dependent on new car purchases.

So if that’s the case, and car purchases have been hit so hard over the past year…

Why on earth has the market for PGMs been so damn strong?

Rhodium is the best example of this dynamic. I made the investment case for it in the December 2019 issue of The Fleet Street Letter Monthly Alert (alongside palladium, which we’ll get to in a second), and despite the WuFlu crash cratering it a few months after, it has done incredibly well.

Does this look like a collapse in car sales to you? 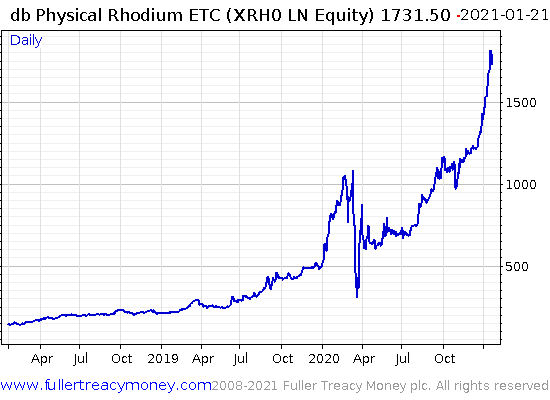 Note: I can’t get the direct data feed for rhodium prices (Johnson Matthey is very protective of it), so have charted the rhodium exchange-traded commodity run by Deutsche Bank which tracks its price instead

I’m using the three-year chart here to illustrate how prices were already elevated before the WuFlu. It’s remarkable to me how strong the market has remained on the back of falling car sales.

Now to palladium, used mostly in petrol cars. The price action isn’t so extreme – we’re not at new all-time highs – but it remains very high. You wouldn’t think looking at this chart that demand is collapsing for the end product it’s used in: 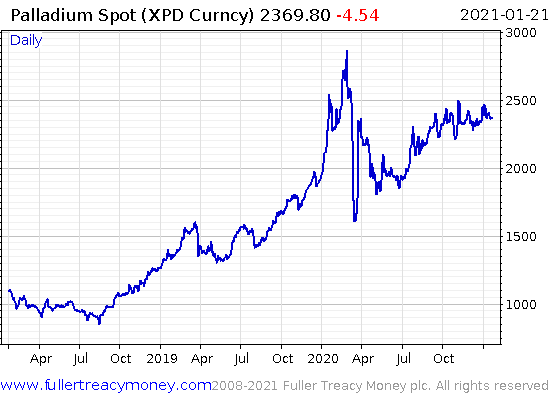 And lastly, let’s look at the weakest of the three: platinum, used mostly in diesel cars. It’s been hamstrung since the Volkswagen emissions scandal, in the doldrums for years. And unlike the other two, its price was not elevated pre-WuFlu. But after the crash in March, it began building upward momentum again despite the stagnant car market: 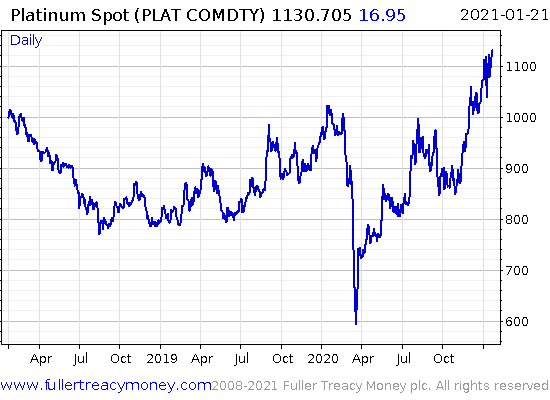 And if we zoom further out on that platinum chart, it looks like we may have seen a fundamental change in trend for platinum: 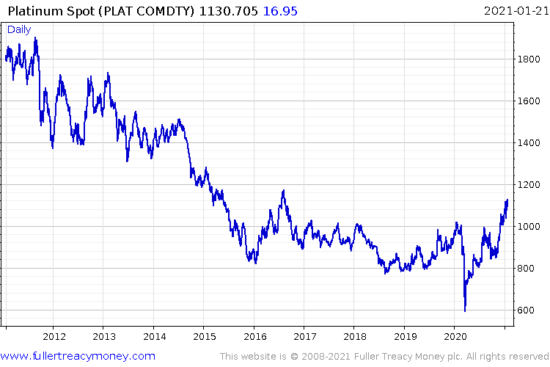 Why are PGMs catching such a bid if car sales are down so much? Markets are forward-looking of course, and maybe just pricing in a return to normal. But rhodium going to new all-time highs, palladium cruising at a significantly high plateau, and platinum breaking from a decade-long trend makes me think something else is going on.

I remember a metals analyst telling me in 2019 that he thought palladium was in a bubble. But if it was, you would have expected the crash in March to drain all the speculation out of it, and for it to flounder for at least a little while after.

I think these charts speaks of an incredibly tight market, where small increases in demand can push prices higher in a big way, and large increases in supply don’t faze it. And I suspect this is being brought about by the combination of low mine supply, compounded by something called “Euro 6” – soon to be joined by “China 6”.

“Euro 6” is a set of European emissions standards, which mandate lower emissions from new cars. This means the catalytic converters in cars must become more efficient, or more PGMs must be packed into them. Euro 6 has been progressively rolled out over the past few years, with the final segment of the Euro 6 legislation – Euro 6d – being introduced last year (the even more restrictive Euro 7 is in the works for 2025).

“China 6” is the Chinese equivalent of these regulations, which were supposed to go live in 2020, but was delayed by the WuFlu to July of this year. The outcome will be the same: less emissions will be tolerated by the state, so catalytic converters need to be more powerful one way or another.

And if this is where these metals are trading when car sales are collapsing… just imagine where they might go when people start buying cars again. The price squeeze higher could be ridiculous. I expect we’ll see headlines about a grand rally in “green gold” in due course…

PS In a complete coincidence, while I was penning today’s note my colleague Kit Winder (who didn’t know I was writing this, but is well aware of my interest in PGMs), emailed me to say that an acquaintance of his has just had his catalytic converter nicked. The higher the prices on these charts go, the more likely a thief will slide under your car. A year ago in this letter, a reader suggested you park your car so that the converter is positioned on the kerb-side, as it’s much harder to steal it that way.

Another reader wrote in recently with some advice for those wanting to be extra careful:

Last year [the catalytic converter] was stolen from our car which put it out of action for 6 weeks because so many had been stolen that there were no replacement converters in the UK.

I was told that metal cages fitted over the part won’t protect it because thieves just remove it along with the whole section of the exhaust.

Google led me to a product called “ Catstrap” it fits over the exhaust and if a metal saw touches it, an incredible noise erupts from a device connected to the strap. The noise is so loud that nobody can stay near the car until it is switched off by the wireless device that is provided.

I look forward to an attempt to remove the converter again.