Penny for the Guy?

Penny for the Guy?

TERMINAL 1, MANCHESTER AIRPORT – Remember, remember, the fifth of November… or don’t. Her Majesty’s government certainly seems to be having trouble with it.

It’s ironic that tomorrow’s lockdown across England kicks off on Guy Fawkes Day. Especially now that we’re calling them “firebreaks”…

While I’m sure the Bonfire Night detail was overlooked in favour of beginning the lockdown as soon as possible, I don’t think it’s a date the Public Relations department would have picked.

V for Vendetta made Guy Fawkes masks a must-have for any budding anti-establishmentarian years ago (most notably exhibited by the Occupy and Anonymous movements and also during the Arab Spring). To enforce a lockdown on the date when those wearing them are most likely to come out, is asking for a protest. Especially now Nigel Farage (who can now be found over at Fortune & Freedom) is in the business of forming an anti-lockdown party…

But if there are fireworks (or gunpowder) on public display tomorrow, I won’t be here to see ‘em. Lockdowns don’t agree with me and frankly, I don’t agree with them. In pursuit of lady liberty, I’m off to Stockholm for a while – I’ll let you know how it goes.

I’ve never been anywhere in Scandinavia, so this’ll be an educational experience. As the Swedish economy has begun to grow again, it’ll be interesting to see how their capital markets behave as the rest of the world commits to more lockdowns.

In the meantime, I’d like to show you a snippet of the data crunching Charlie Morris has performed for his subscribers over at The Fleet Street Letter Wealth Builder on the latest WuFlu statistics. I can’t show you his investment advice of course – you need a subscription for that – but I can shave off a bit of gold leaf and give it to my dear Capital & Conflict readers.

Before we get to that though, if you haven’t responded to our poll on the latest measures, please do so below – I’ll publish the final figure count on Friday…

Do you think the new lockdown measures are necessary?

Just click your answer, and then come back to this email.

Nathan Tipping will be with you tomorrow with an update on how the US election has impacted markets – I’ll be back on Friday.

For now, I’ll leave you with the good stuff from Charlie Morris…

Lockdowns and the US election
Charlie Morris

Lockdown kicks off yet again for 30 days so says the prime minister. I fully understand the risks to public health. But with the Nightingale hospitals, improved treatments and six months to prepare and learn about the virus, we are in a much stronger position than ever before.

I am firmly in the camp that sees the lockdown causing more harm than good. But better than that, I am optimistic that this second wave will be less severe than the last, as it will see it seems considerable herd immunity has already been established.

The data support my views. The virus will spread anyway and slowing it won’t change the eventual outcome. But it will bring the country’s finances closer to breaking point, put millions out of work and make this a seriously miserable winter.

Case data is questionable as the results are heavily skewed by the availability of testing. This means the numbers in the first wave are massively understated. Deaths are also controversial because deaths can be “from” or “with” Covid-19 and both are counted in the official statistics. Hospitalisations on the other hand, seem to be the best measure out there as both waves will be measured on a similar basis.

Note how the North East and Yorkshire are seeing hospitalisations grow faster than London; the reverse of what we saw in March. London’s population of 9 million is similar to the North East’s population of 8.5 million, so the samples are compatible. Quite obviously, the virus spreads faster in the mega city of London than the spread-out North East.

We know that contagion is a social beast and spreads fastest in the slums as seen in India and Brazil. Then come the cities, with the rural areas showing the slowest spread. It is telling that densely populated London is seeing much slower growth in the second wave compared to the regions as demonstrated by the North East. I gather a similar situation is seen in France with the regions seeing faster growth than Paris.

Looking around the world, unfortunately having to make do with case data, the countries with the highest incidences are seeing a continued deceleration in new cases. I have included Spain as it has had a stringent lockdown policy, which hasn’t led to the virus being flushed out. Sweden, where there has been no lockdown, is growing again. It has a vibrant city, with much of the rest of the population being fairly spread out. 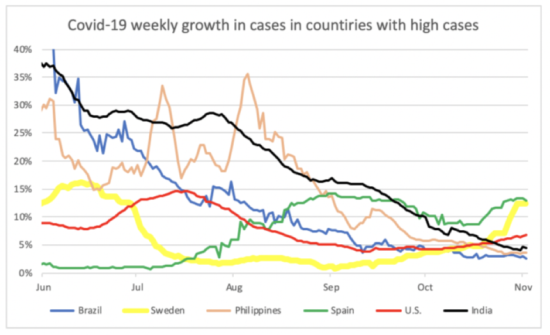 When we look at the Swedish experience compared to Europe, it is interesting to see countries such as Germany, the Netherlands and Norway, which were previously praised for the handling of the pandemic, now showing high growth rates. Sweden, in comparison, has the slowest growth in Europe. 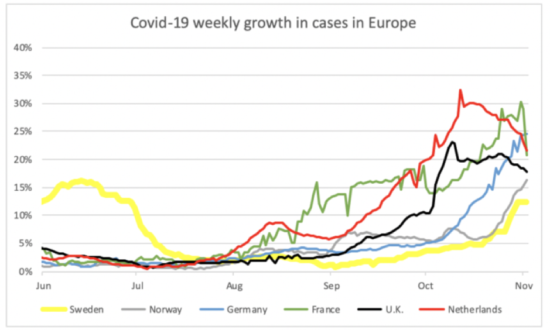 Moving on to Asia, where they had strict policies and better preparedness from the lessons from SARS, I just wonder what their exit strategy is other than permanent lockdown. Malaysia had an outbreak and has severe restrictions, and its borders remain closed. As a result, new cases are dropping. 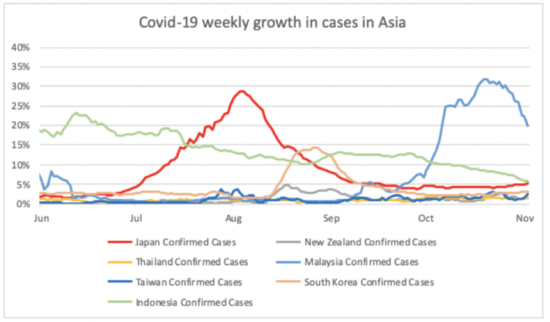 But in no case has the growth rate dropped to zero. Even with closed borders and strict policies of social distancing, mask wearing and track and trace, it doesn’t go away. You can slow it, but you can’t stop it. Empirical evidences suggests that it is better to let it run its course, than trying to overcome nature.

Countries with high slum populations have already seen the worst, as have densely populated cities, where the spread occurred earlier in the year. Severe lockdowns are effective but don’t provide an exit strategy. Sweden is seeing slower growth than the rest of Europe, which implies the virus finds it harder to spread in Sweden than elsewhere; for the simple reason that it has already spread.

In conclusion, the countries with the highest number of cases behind them are the ones with the fewest cases ahead of them. Those with the worst 2020, will have the best 2021. This is a controversial, and not much talked about subject. Rather than an open debate, the government strategy is to terrify people.