ECCLESHALL, STAFFORDSHIRE – A nice chart to start us off with today. While it’s no surprise where investors have placed their money in the stockmarket this year, the sheer degree to which they have shunned everything except tech stocks is something to behold: 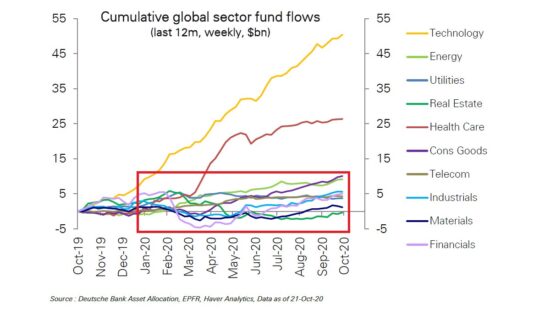 Investor buying flows to different sectors of the stockmarket this year
Chart courtesy of @MacroCharts, on Twitter

We’ve written often about this torrential flow of cash that has hit the tech sector this year, but I hadn’t seen an illustration of the divergence between tech and everything else quite like that one before.

What is it about “tech” that’s attracted so much capital this year? We’ve explored some of the explanations put forward as to why this has taken place – some conventional, and some less so.

But while we’ve often focused on the incredible rise of certain tech stocks, we haven’t looked too hard at all the other stocks that have been left behind. The migration of capital into tech stocks will have created many bargains elsewhere, as “boring” stocks are sold to provide capital to charismatic CEOs with grand visions of how they’re going to change the world.

Value stocks – shares in relatively stable companies with good cashflows and dividends that are trading on the cheap – have been shunned for many years now in favour of “growth” companies (mostly tech), which aggressively try to scale their business and dominate their industry by borrowing money from whomever will lend it to them.

Many cautious value investors have been left in the lurch this year, while many growth investors have seen their risky portfolios surge in value. This may appear to be a quandary: surely caution would be rewarded in a year when the global economy has been shut down, right? But alas, the solution from our noble financial overlords to get us out of this hole is to encourage risk-taking, and that means rewarding risk-takers – or at the very least, softening any blows that may be thrown at them. Throw in the fact that the internet is one of the few sectors that has benefitted from the WuFlu (like healthcare stocks, as the chart above illustrates), and established companies with a “tech” label have become a money magnet.

While I’ve been aware of this dynamic for a long time, I wasn’t aware of just extreme the divide has become. Take a read of this from the Financial Times, emphasis mine:

Value investing is suffering its worst run in at least two centuries after the pandemic compounded a decade of struggles for a popular strategy that consists of buying cheap stocks in often unfashionable industries.

The approach of favouring bargains — typically judged by comparing a company’s share price to the value of its assets — over faster-expanding but expensive growth stocks has a long history. Economists Eugene Fama and Kenneth French have shown that modestly priced stocks have in the long run returned significantly more than the broader equity market.

But value stocks have performed dismally since the 2008-09 financial crisis and this year the drought has worsened dramatically, making the degree of underperformance relative to racier growth stocks even more extreme than at the peak of the dotcom bubble…

Research by Mikhail Samonov, the head of Two Centuries Investments, a quantitative fund manager, suggests the performance of value is now the worst since at least 1826 — the year former presidents Thomas Jefferson and John Adams both died. US stock market data only goes back to 1927, but Mr Samonov has gone back a century further using older, rougher data compiled by Yale finance professor William Goetzmann…

According to Mr Samonov, the value factor is now down 64 per cent from its peak in 2007, going beyond the previous record — a 59 per cent tumble suffered from the late 19th century until a nadir in 1904.

It’s interesting to think how Warren Buffett, arguably the world’s most well-known investor, comes from a background of value investing, when value investing has faced such headwinds over the past two centuries. But while I’ve described how value stocks have been shunned hard in recent years, that doesn’t mean all value investors have suffered.

Our own Tim Price over at The Price Report – a card-carrying value investor if ever there was one – has done just fine over the past few years. But he’s a resourceful man, who thrives in adversity – he doesn’t mind travelling far afield into frontier markets if that’s where the biggest value investing opportunities are. And he’s adaptable too – willing to combine modern investing strategies like trend-following with ancient ones like precious metals to protect his portfolio.

My colleague Kit Winder had one word to say about that FT article: opportunity.

Know what you’re doing – or follow an investor who does – and you’ll do just fine in bad market weather. And should the sun finally come out, and a multi-century trend finally turn around… you’ll do even better.