“Greenbacks from Greenpeace” and the investments of Icarus

“Greenbacks from Greenpeace” and the investments of Icarus 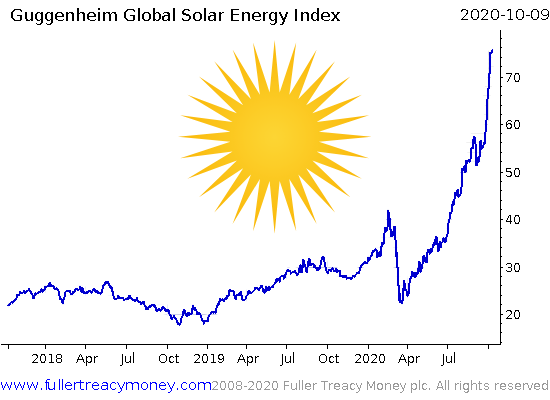 THE ROYAL OAK, STAFFORDSHIRE – “Sunshine, on my shoulders, makes me happy…”

I doubt John Denver would be very chuffed were he living in the UK these days (or ever), given our weather. But the great musician’s music is likely still a hit amongst Britons invested in the solar energy business.

Denver’s Sunshine on my shoulders is certainly what sprung to my mind when I looked at the chart above of the Guggenheim Solar Energy Index for a peek at how the “sun stocks” are getting along.

The asset management firm Invesco (which many readers may recall mentored Neil Woodford, though I doubt they’re publicising that these days) runs an ETF that follows that index, with the fitting ticker “TAN”. Had I invested in TAN earlier this year, I’d probably be listening to that track on repeat…

But what has brought about this sudden surge skyward for solar stocks? Are the bold predictions for renewable energy made by our energy specialist, James Allen coming to fruition? The returns he’s making for his subscribers over at Exponential Energy Fortunes would certainly align with that view – he recommended a solar stock just two months ago that is already up 75%! And there’s another sitting in his portfolio which he recommended last year that’s up more than 160%…

Here’s a snippet from a recent note he published on the solar industry:

[Finding stocks] in the solar space that fit our profile and strict buying criteria has not been straightforward, despite the exponential growth in solar power seen over the last 25 or so years.

On first glance, the reason for that is perhaps a little surprising, considering solar energy – power from the sun – is a vast and inexhaustible resource, a fuel that, once a system is in place to harness the solar resource and convert it into useful energy, is totally free, meaning operational costs for solar projects are low.

But for operators of solar projects, and especially for manufacturers of solar modules, profit margins have historically been thin.

This is because the solar industry across the board is highly competitive in both the residential and commercial sectors, with each company eager to outbid the next to establish brand and become the dominant player as the industry grows.

This competition means solar operators and manufacturers have to work out how to find a competitive advantage to improve efficiency and lower costs.

However, things are changing.

The solar industry is in the midst of a consolidation phase, with a few of the smaller or less efficient companies leaving the market, opening the door for the remaining firms to increase market share and boost margins.

What’s more, the rate of cost declines in the sector is now slowing, making it the ideal time to snap up a firm on the cheap in a sector that we can now expect to seriously outperform…

James is certainly onto something – his investment reputation now precedes him. And the boom in solar may well just be the sector finally getting some time in the sun after its collapse following the financial crisis.

But as cynical as I am, I always wonder if there’s an alternative explanation for what’s going on in the market. Clean energy stocks have had plenty of “Icarus moments” in the past – falling from the sky after a compelling narrative of changing the world has driven the shares higher – and you never want to be up there with Icarus when his wings start to melt.

Some commentators think the rise of solar stocks may be the market anticipating a Biden presidency, as his campaign has pledged to commit $2 trillion to clean energy should he make it to the Oval Office. In which case, perhaps it’s not looking so sunny for the solar sector after all – I’ve become increasingly convinced that Trump will be re-elected in three weeks. I was discussing with my colleague Sam Volkering on Friday how similar this feels to 2016, with assurances that Trump will lose coming thick and heavy from the press. I’ve even taken to the bookies, so strong is my conviction… but that’s a topic for another letter.

For today, I want to show you an alternative explanation for the boom in solar this year. Remember ESG? Environmental, Social and (Corporate) Governance? We’ve written about it a couple times in the past in this letter (A deep green gluttony – 10 May 2019), and this year, it’s really come into its own.

Being vetted and approved as ESG has become a rite of passage for both publicly traded companies and the investment managers who buy their stocks. Large investors like pension funds and large businesses like Microsoft are under significant pressure to invest and behave “greenly” – or risk the ire of the Greta Thunberg/Extinction Rebellion crowd. Even the Pope is getting involved these days. 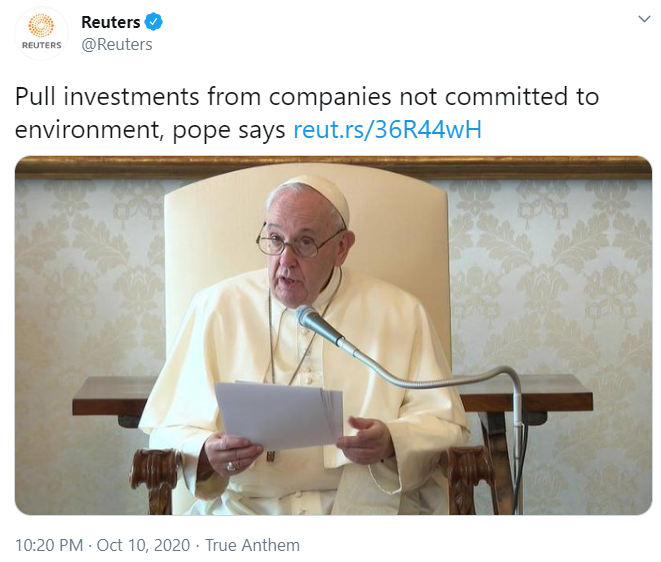 A decision has been made to solve this problem by wearing a sticker that says “ESG”. If you’ve got an ESG badge you won’t be hassled by politically motivated actors, and you get to tell everybody how kind and considerate you are, and how you really just care about the planet and are doing your oh-so-humble duty as a human being to promote peace, harmony, love, understanding, etc etc. Imagine if every major investor was a TED talk speaker, and you’re halfway there.

Political correctness and signalling your virtue has arrived for the money-management crowd in a big way, and kicked into high gear right as the lockdowns hit. Just look at the billions that have flowed into ESG funds, and out of non-ESG funds this year: 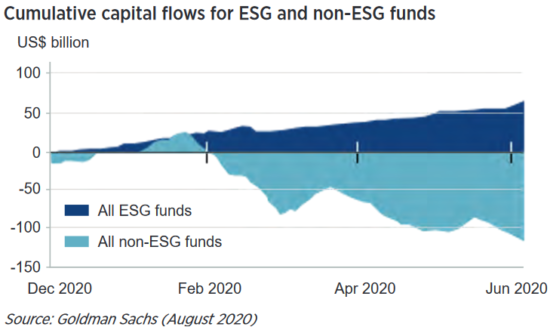 I expect one of the reasons why solar is doing so well this year is as a result of this dynamic – it doesn’t get much more “E” than harvesting sunlight.

The ESG trend ultimately represents the politicisation of investing, where uninvested parties without skin in the game gain increasing influence over the investment decisions of those who do. This is a dynamic I expect we will see a lot more of in the years to come, and investors must adapt to it.

The “greenbacks from Greenpeace” investment flow won’t be going away – if anything, it’ll become stronger as investing becomes increasingly politicised. If you fancy your luck, you might even want to get ahead of it and buy the green assets early before the billions of “GFG” cash arrives. Pull it off right, and you’ll be flying with sunshine on your shoulders for years to come. Get it wrong though – buy a green company that goes bust before the GFG cash arrives… and your portfolio will have more in common with Icarus than you’d like to admit.

PS As politics and markets become increasingly intertwined, you’ll want this man in your corner – he’s joined Southbank Investment Research just as the going gets tough…