We continue with the second half of our short report on the return of inflation. If you haven’t read part I yet, you can find it on the website here.

Tomorrow, you’ll be hearing from a new member of the team here at Southbank Investment Research. He’s a man with quite an exotic investment history, whose travelled all over the place on investment business and has had many “adventure in finance”. He’s called Nathan Tipping, and I’m confident you’ll want to hear what he has to say.

But he’ll be here tomorrow and Thursday – for now, on with part II…

The return of inflation
Part II: the only way off debt mountain

If you’re the government staring up at its current debt mountain, you’re quite rightly worried.

Raising taxes won’t be enough to tackle it. Neither will austerity. And neither option is popular with the electorate anyway.

So how else can the government get a handle on its finances?

Letting inflation off the leash may be the only way out that governments can see.

Central banks have created a colossal amount of new money to tackle the economic impact of Covid-19. But this time they’ve gone further. While the 2008 crisis saw central banks pump money into the financial sector, this time people and businesses are on the receiving end too.

Given the economic devastation wrought by the last lockdown, including a mass bankruptcy and high unemployment, there will be less supply and less choice. With more money chasing fewer goods, inflation is set to rise.

Here at Southbank Investment Research, we’ve argued that the central banks have finally stepped into unprecedented territory in terms of QE. Previously, central banks would pump money into financial institutions, but these institutions were not forced, in turn, to lend to the real economy.

Remember, every time a bank creates credit, it’s essentially creating money out of nowhere. So with banks being forced to extend credit, they are in effect drastically increasing the money supply – which gives governments more power than ever to boost inflation.

The market historian Russell Napier calls it “Stealing money from old people, slowly”. If the return on bonds is lower than inflation – known as “negative real rates” – then once you have adjusted for inflation, rates are in reality negative. Investors who think they’re making money are really losing purchasing power.

In short, to clear up the government’s mess, the average investor loses out.

Investors might not even have to wait for negative real rates before investors really feel the pinch.

As I’ve written before, the Bank of England has been ramping up the rhetoric around negative interest rates for a while. 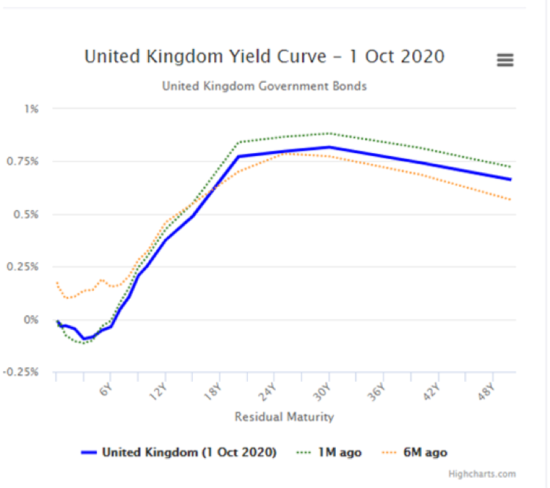 Which assets, if any, are safe?

To easily understand which investments are the safest at different times, I’ve included the following graph, a “Money Map”. My colleague Charlie Morris created it to show you how to allocate capital through different economic environments: 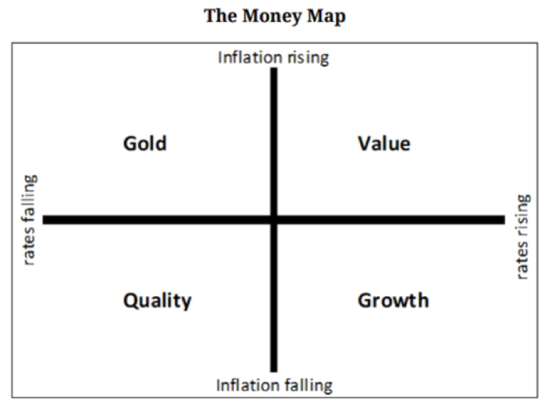 With inflation on the up and rates trudging new lows, gold looks to be a safe bet for investors wanting to park their money. As a general rule, gold likes cheap money. It’s a safe port in a storm, so can rally sharply when central banks are pumping out free money and inflation is rising.

A full analysis of gold’s investment properties – its role as money through history and its supply and demand dynamics today – is beyond the scope of this report. For now, just know that when it comes to financial repression – low interest rates and high inflation – gold is exactly what you want to own.

And while you’re at it, you may want to take a look at silver too, which is beginning to awaken once more after years in the doldrums. The gold/silver price ratio is narrowing, as shown in the chart below. In May, the gold/silver price ratio was at a historic ratio of 109:1. Now, despite a modest bounce back, it sits at 80:1, despite gold continuing to nudge new highs.

The gold/silver ratio is falling now because of silver’s gains. And if the ratio reaches its historical 47:1 average, silver prices would jump 65% if gold holds steady – and rise even higher if gold keeps surging.

Whether or not the historical ratio of gold and silver still holds merit today is a a matter of significant debate. The majority of silver supply today is a by-product of mining other metals like copper and nickel, so rising silver prices don’t always lead to more supply arriving on the market. While this dynamic can be very bullish for silver, it also means there is a significant disconnect between it and gold, as gold is often mined primary for itself rather than in the pursuit of something else.

While many investors care deeply about the gold/silver ratio, the actual supply of silver to the market does not – so don’t treat the metric religiously. Just use it as an indicator of how much the market values one metal over the other.

And as you can see, for most of the last decade the market has favoured gold over silver; the ratio has only climbed… until earlier this year, when it skyrocketed and then collapsed. This may be the beginning of a change in sentiment – silver regaining favour – and you should keep an eye on it.

The gold price in sterling 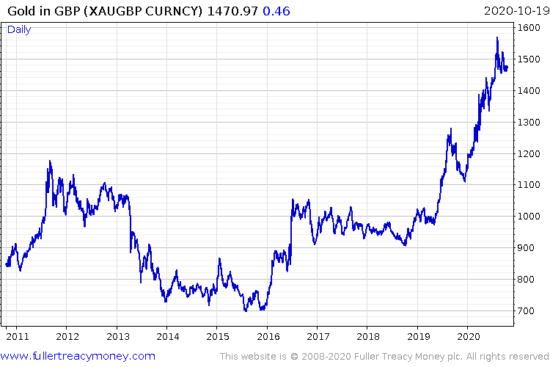 Although it may be true that stocks deliver better returns than bonds during periods of high inflation, this isn’t always the case. After all, if inflation is 15% then an investor needs stocks to deliver far more than this to make a comfortable profit. Otherwise they risk the illusion of solid returns, which are in fact offset by inflation.

Here at Southbank Investment Research, our analysts – like Tim Price over at The Price Report – have pinpointed value stocks as being the best segment of the stockmarket for periods of high inflation. These enjoy a degree of in-built protection from inflation as their value is linked to market prices, which will be rising during inflationary periods.

The idea of inflation eating away at your hard-earnt savings can be daunting. Intimidating, even.

But being ahead of the curve on this puts you at an advantage. For the chaos in financial markets that will be brought about by higher inflation will create opportunities to grow your wealth – when the broader market is caught unawares and is forced to react.

I’ll be watching the situation closely here at Capital & Conflict. And when new opportunities cross my desk, readers like yourself will be the first to know.

In the meantime, make sure you’re subscribed to our sister e-letter Fortune & Freedom, where protecting your wealth from all threats – is priority number one.