The quaint club of countries destroying their citizens savings

The quaint club of countries destroying their citizens savings

To start us off, here’s some light relief to brighten your day: 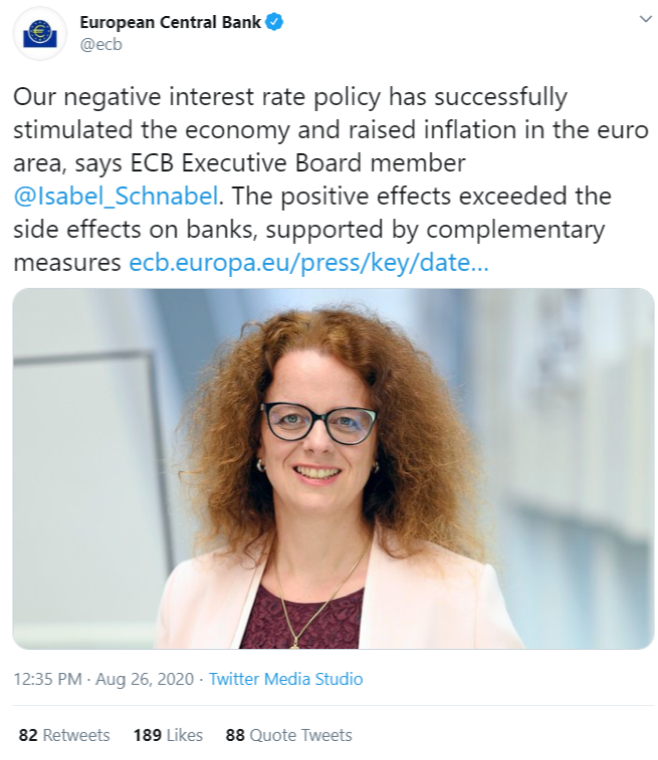 There’s a lot to unpack in there; we could go down several different routes on the subject of negative interest rates and the European Central Bank’s self-congratulation for implementing them.

That tweet was not received well by the Twitterati. If you take a look at the responses beneath and the retweets, they’re mainly divided into two camps: outright mockery and the promotion of bitcoin as a solution to such monetary excess.

The ECB board member in question, one Isabel Schnabel, also featured heavily in a recent article in the Financial Times, with a similarly… “interesting” headline: 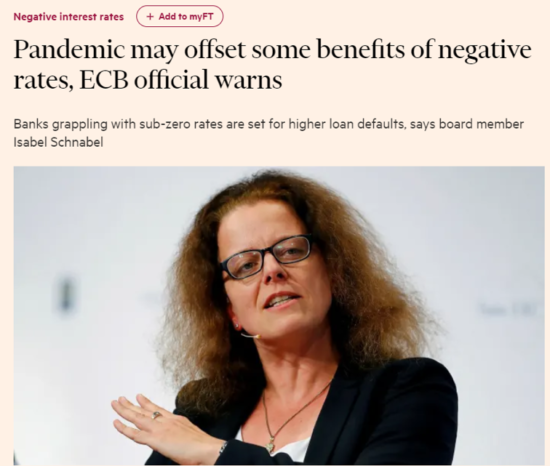 What stands out to me from all of the above is the framing of the subject. The conversation on negative rates now begins with the notion that they are beneficial, and then negotiates backwards from there. This is what the normalisation of radical ideas looks like.

The FT itself now gives countries imposing such repressive policies – which includes the Swedes, Danes, Swiss and Japanese on top of the eurozone – the quaint title of the “Negative Rates Club”. Wouldn’t you want to join? The benefits of membership are that your government isn’t penalised for using its credit card, but you are for owning money.

With the debate now being centered around the premise that “negative rates work and are beneficial – they just have a few side effects we need to deal with”, the idea that this monetary fever dream is going to end anytime soon becomes harder and harder to believe.

Financial repression is baked into the cake, and ever more folks in the future will have to taste its foul dough. With that in mind, it’s hard not to be attracted to gold as a long-term holding.

However, as I’ve previously detailed in this letter, I believe gold and silver got ahead of themselves over the last couple of months, and headed upstairs too fast. As my friends were talking about gold after its bull run and when it began entering the ranging phase we’re in now, perhaps the indicator still works for pullbacks and not just crashes.

The question for me is how long gold and silver range for in the meantime, and what kind of catalyst will push them on to the next move higher.

I was thinking about that FT headline when a reader chimed in with this short comment yesterday:

Austrian local TV has recently started an advertisement at prime time by a national [gold] bullion business…. shoe cleaner, or what?

I assume this is a reference to the story of Joe Kennedy, a Wallstreeter in the 1920s who knew it was time to sell his stocks when a shoeshine boy was giving him stock tips, and not to some incredibly expensive footwear taking Austria by storm.

Perhaps the presence of gold being advertised on Austrian primetime is a sign that gold is peaked and it’s only heading down from here. But Austria is at the very heart of the eurozone’s totally normal (and very beneficial) interest rate submersion. And if Isabel Schnabel has her way, that’s not gonna change any soon. Indeed, as that FT article grimly ends, emphasis mine:

Much of the debate about negative rates hinges on the idea of a “reversal rate” below which it becomes more attractive to hold physical cash than to deposit money in a bank and at which point lending is subdued and starts to fall.

But the ECB still insists it could cut its rates further into negative territory if needed.

Ms Schnabel said: “There is considerable uncertainty as to the precise level of the ‘reversal rate’ and current estimates suggest that the ECB has not reached the effective lower bound.”

If we haven’t reached the bottom of the ECB’s very virtuous (and not destructive whatsoever) negative interest rate adventure, then how does the gold price in euro not keep going higher over the longer term? What happens to make this blue line start trending in the opposite direction? 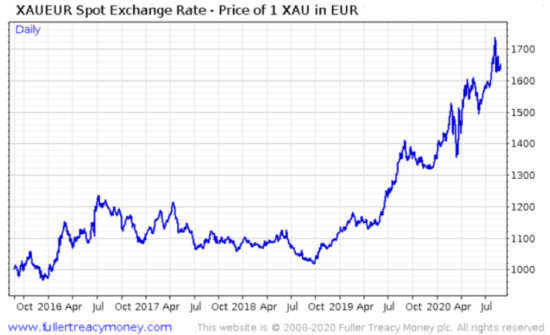 I find it hard to think of what might do it. For while the ECB and press normalise the practice, nothing changes the fact that making the price of money – interest rates – less than zero, is an inherently destructive exercise that reduces the value and utility of money in general.

“I remember when central banks tried to suppress inflation and didn’t try to destroy savers and their savings,” commented my colleague Tim Price wryly.

I don’t. And I’m not sure I’ll ever see that in future either. Which means I’ll probably be holding some gold for a very long time…

I’ll be back with you tomorrow – and I’ve something special in store. Don’t go away!

PS Wonder why so many of the responses to that tweet from the ECB were about bitcoin? Kit Winder can help you out there. He’s gone through quite a transformation this year from knowing next to nothing about bitcoin to demanding a masked vigilante patrol crypto exchanges. Find out what he’s on about in today’s Exponential Investor.