The greatest market rally of all time

The greatest market rally of all time

What a year this is turning out to be. We’re going through the months like a pack of Chewits.

It’ll only be a few weeks until autumn officially begins and this strange summer will be forever in our rear-view mirror.

For some folks, this is a good thing. They just want the year 2020 over with. They want to turn a new leaf, grab a clean slate, and “restart” in 2021 like life is a video game. I understand the sentiment – but it does seem a shame to be parting with the sunny summer days so soon.

It ain’t just time that’s moving fast this year though – markets are too.

Bank of America recently published an interesting stat on just how rapid the US stockmarket has been rising since March. While we’ve often observed the breathless surge higher in stocks over the pond here at Capital & Conflict, the following chart gives some historical context which I hadn’t seen before.

If the S&P 500 index continues on its current trajectory for a couple more months, this will have been its greatest rally of all time. The fastest increase in fortune for the world’s largest stockmarket… in history. 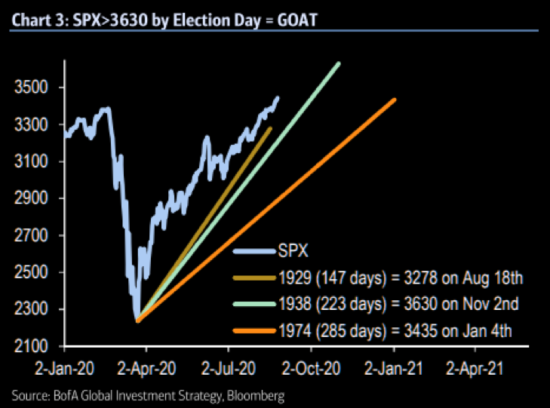 The straight lines represent the trajectory of past recoveries for the US stockmarket. The pale blue line (present stockmarket performance) must not break through the gold line if it wants to keep the record.
Chart courtesy of The Market Ear.

But of course, a lot can go wrong in a couple of months – especially with the election coming in November. With Donald Trump having tied his own reputation as president to the stockmarket, it’s in his own interest to keep ramping that rally higher… and in the interests of the Democrats to sabotage it.

The GOP may as well swap out the elephant on its emblem for a bull – and the Democrat Party could replace its trusted donkey symbol for a much more imposing bear.

Who do you think’s gonna win in November? Will it be Trump/Pence or Biden/Harris? I want to know what you think – I’ll include a poll in tomorrow’s email, and give my £0.02 for what it’s worth.

Whatever the outcome, I doubt either candidate will do much to the purchasing power of the world’s reserve currency – the USD, or as Trump puts it, “our cherished DOLLAR”. Neither candidate is gonna stop the printing presses at the Federal Reserve or the US Treasury from rolling: there’s no Tea Party movement like there was a decade ago to push Congress and the Senate into cutting the size and cost of government.

So the presses will run, and run hot – no matter who makes it to the Oval Office. And as the dollar is the global reserve currency, if you begin inflating its value away, you subsequently begin inflating the price of everything else in the world, well outside of the US’s borders. That’s the blessing and curse of controlling the world’s currency: it gives you global reach and influence, but the consequences of your actions in foreign lands can reach back to throttle you.

That’s one of the reasons I think it’s always worthwhile to have an allocation to gold. I asked you last week if you’d heard any friends or family talk about buying gold recently, for mine have, and that makes me think the price is gonna go lower in the short term.

Thanks to all who wrote in with their own anecdotes. One in particular stood out from the crowd for its contrary nature – from a gentleman actively driving the phenomenon, and telling his family to buy gold:

In popular culture, such people may recall the famous film “The Italian Job”; the £4m 1969 gold heist by the boys in their Minis would at today’s price, be ~ £432,802,617 – half a billion! The gold hasn’t risen in value, the 1969 £ has simply lost all of its value. The even broader point is why? It was the politicians they voted for wot did it. That “spike” in gold price should be looked at as a spike in the stupidity of politicians. Gold is a put option against the stupidity of politicians.

A month or two ago I recommended to my brother the best thing he could do for his new grandson in New Zealand was to buy £10k worth of gold and give to him when he comes of age. Long term charts show that FIAT declines at 9.4% against all currencies historically and the NZ$ at ~ 12%. Compounded over 20 years that £10k of gold would be worth around $220k NZD when the kid is 21 which will buy a nice round of drinks at his 21st! And against the inevitable [Central Bank Digital Currency] that the South Sea Socialist Ardern will impose? Who knows…

While gold made it to two thousand American dollars in recent weeks to much fanfare, for the Kiwis the “two thousand dollar” mark for gold is yesteryear’s news. Gold (represented by the currency symbol XAU in the chart below) hit two thousand New Zealand dollars (NZD) in April last year.

Just like their rugby team, the New Zealanders are ahead of the game. Gold over there is already loitering at the three thousand dollar level – albeit in New Zealand dollars, and not the American variety: 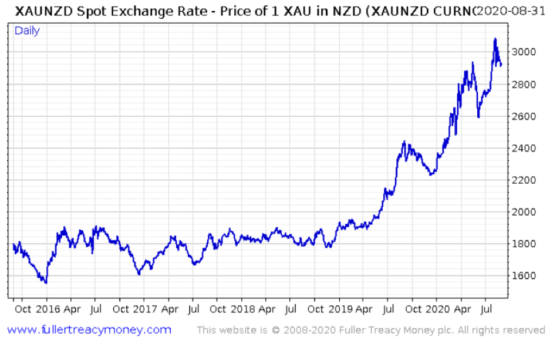 We Brits are looking paltry by comparison. We’ve only made it to half that figure over here – a troy ounce of gold is “only” worth one and half thousand “UK dollars”, more commonly known as “pounds”.

We’ve clearly plenty of catching up to do. But all in good time. And with the months passing this fast, that’ll be no time at all.

PS On the topic of fast markets, it’s worth noting that in some cases the rapid market moves have been provoked by the in anticipation of faster internet. The rollout of 5G internet infrastructure during lockdown has created plenty of excitement: admittedly, not all of this has been positive (see: firebombing of 5G towers), but from the investment side there are several interesting opportunities emerging. If you want to seize a stake of these “rollout riches”, click here.