Lewis Carroll was writing Alice in Wonderland in Oxford…

America was alight, burning with a Civil War…

… and the French were getting close to pasteurising milk.

The Oil Age was in its infancy, but growing strong – the first ever shipment of petroleum from America to Europe had just arrived in London, sailing into Victoria Docks aboard the Elizabeth Watts.

The age of paper money meanwhile, was in its “prototype” stage. Abraham Lincoln was setting up the printing press to pay for the war against the Confederacy. The first ever “greenbacks” would be created that year, backed by nothing but the Union government’s promise that it was “legal tender”.

And amid all the chaos… somewhere in Britain, this was in somebody’s pocket: 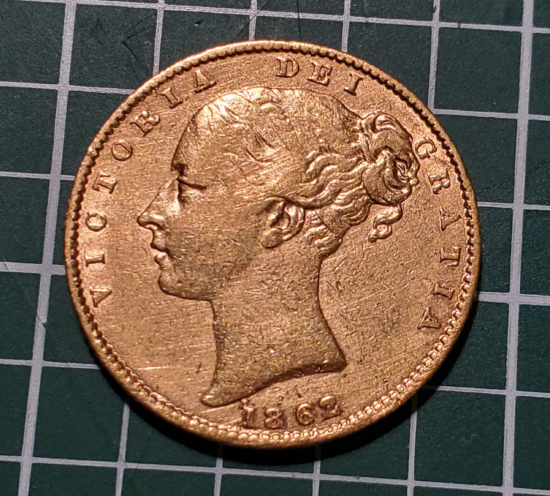 This is a recent acquisition of mine.

While I’ve been invested in gold bullion for a long time, this is the first sovereign I’ve got with Queen Victoria on it.

Older gold coins can cost a fair bit more than your average, more recent sovereign (you’re looking at a >20% premium above the gold price for this kind of vintage), and for a long time I didn’t really understand why there’s such a strong market for them. After all, the gold content in every sovereign produced from 1816 until now is the same. Why pay such a high premium?

But I made a bit of cash on a good trade recently, and thought I’d see what the fuss was about. It was during the the WallStreetBets debacle that this occurred, when a load of kids on Reddit became utterly possessed by the idea that could control the stock market. I did not participate in the great squeeze in GameStop that made the news (or its subsequent crash), but I was interested in another stock that was targeted by the self-proclaimed “retards”: BlackBerry ($BB).

Unlike GameStop, BlackBerry actually has some decent fundamentals, having pivoted from mobile phones to cybersecurity. And as regular readers will know, I think the lockdowns and “working from home” phenomenon is a very bullish dynamic for the “cybersec” industry (see: Plundered in lockdown, 25 June 2020).

The company had been on my radar for a while, and so when the kids on the internet were passionately proclaiming to any and all who would listen that the stock was going to go up, I thought I’d give them the benefit of the doubt. (After all, I have only the utmost confidence in the abilities and virtue of anonymous millennials on the internet…)

So I thought I’d put their word to the test, and made a small bullish spread-bet on $BB, setting aside a little smidgen of capital I’m prepared to lose.

And low and behold, when the market opened… the kids were right. $BB stock did indeed rise, and I captured a handsome profit in just five hours. That rise in price didn’t last long – however by that point, I was already high and dry. Whether the price action was the result of their grand forecasting skills, them all buying in the stock at the same time, convincing enough other people to buy in at the same time, or one of these strange hedge funds which try to front-run social media activity getting involved, I’m not sure. Maybe a combination of them all.

But whenever I’m blessed with speculative winnings, the acquisition of precious metals is rarely far from the mind. So I thought I’d go and see what the fuss is about with these Victorian sovereigns.

And I get it now. The age, the history of the piece – it imbues it with a certain gravity. You’re left wondering what that impenetrable golden gaze might have seen through the years. What famous pockets and purses and vaults might that coin have inhabited? What tales of lost Victoriana might it tell if it could speak? Now that I’ve got one, I’m surprised these don’t cost more.

Through all the chaos from 1862 until now, that gold sovereign remains just the same. While the tides of history have washed away so much of the world it was born in, this coin has not only retained its form – but importantly, its intrinsic value.

It’s strange to think that what was a pound coin 159 years ago could be melted down today for its metal content and still be over £300. Something tells me that 159 years from now in 2180 AD, that they won’t be able to harvest nearly so much value from the pound coins being minted today.

And that’s why gold has pride of place on Charlie Morris’s prized Money Map the investment blueprint he uses to reap returns in almost any market condition. From my perspective, there’s always a place for gold in a portfolio, it’s just a matter of size – and Charlie’s map will tell you when the time is right to increase or decrease that position.

Speaking of lost Victoriana, there was actually a distillery created in honour of Queen Victoria on her Diamond Jubilee in Speyside called “Imperial”. It ran intermittently through the 20th century, but sadly was demolished in 2013 (a heinous waste of a brand in my view). If you look around however, there are still a few bottles of Imperial whisky out there – and in light of my recent acquisition, it only seemed right to get one…