Hiding in the money tree

Hiding in the money tree 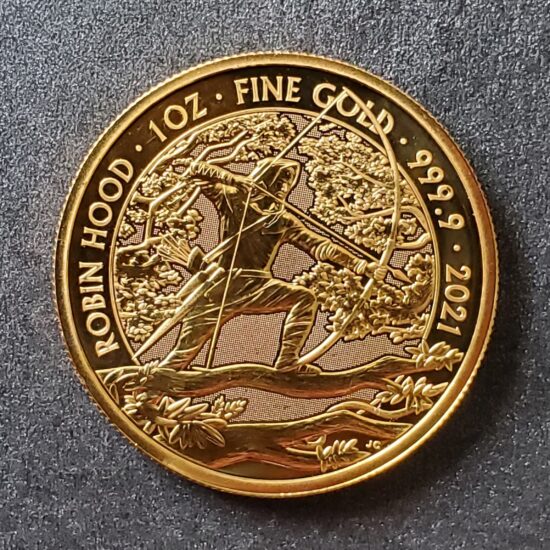 WINDERMERE, LAKE DISTRICT – “We haven’t seen anything like this in the last five to ten years,” an American bullion dealer tells me over the phone. “But we’re still not seeing anywhere near the level of interest there was in gold during the last bull market.”

By “the last bull market” he was referring to the last financial crisis. Not just the post-crash boom either, but the run-up to it in 2007. Gold knew something was wrong well before Lehman Brothers went bust, because that’s just what gold investors are like – sensitive to their environment. Some would scoff and say “paranoid”. I prefer the term “vigilant” – but I would, wouldn’t I.

The coin adorning the top of this letter is a recent acquisition I couldn’t resist. I was puzzled but impressed when the Austrian Mint began stamping images of Robin Hood on to silver bullion. With the Royal Mint now following suit, I’m happy to say that I’m just impressed.

The engraver who has composed so many great pieces for the Royal Mint, one Jody Clark (who hails from near lake Windermere, funnily enough) has continued to excel with this piece. I hope the mint issues a new Robin Hood design per year, as it does with the Britannia and the Valiant coins – I know I’d be a buyer. I wonder if this design was commissioned to take advantage of all the market frenzy surrounding the Robinhood trading app. With “Robinhood” now synonymous with investing thanks to the rise of the app in the States, why not straddle the trend with Robin Hood-branded bullion?

We commented on Monday how investors in gold exchange-traded funds (ETFs) have been dumping their holdings in recent months. But investors in gold ETFs and investors in gold bullion are quite different. Just how different is illuminated starkly when one speaks to actual bullion dealers, who have been beset with huge demand over the past year – demand which has remained unabated despite the fall in the gold price since August.

That American bullion dealer I was speaking to is only the latest person to tell me that while business is booming, the physical supply of gold bars and coins is tight as hell. I spoke to a group of bullion dealers when I was in London who can’t get their product out the door fast enough – as soon as they list a new batch of sovereigns on their website, they’re promptly hoovered up by waiting buyers. While this is good for business, frustratingly they can’t take full advantage of it as they can’t source enough gold to bring to market.

And this is all to the backdrop of a gold price which only stopped falling in late March. Just imagine what’ll happen when the gold price starts gets wind in its sails once again…

I doubt we’ll have to wait long. As my colleague Charlie Morris over at The Fleet Street Letter Wealth Builder said recently:

The past year has been market by one of the strongest post-crisis recoveries in history. Not only was the economic collapse self-inflicted, but the subsequent recovery was fuelled by the greatest stimulus package of all time. With markets responding so well, it is little surprise that gold has watched from the side-lines. As the world normalises, and the leaves fall from the money tree, the good times won’t last forever. The smart money is buying gold.

The man or woman who wants to hold a gold coin in their hand is quite different from the fund manager who wants to hold a paper promise of gold in their portfolio. But as that market for “paper gold” is much larger, it sets the gold price. Fittingly, those buying the physical metal (and not shares in a gold ETF) are the underdogs, like Robin Hood – hiding high in the leaves of the money tree, waiting to strike…