WINDERMERE, LAKE DISTRICT – In yesterday’s note we took a look at how the hoards of gold held by ETFs (exchange-traded funds) have been steadily draining for the past several months. This is – intriguingly – in stark contrast to the hoards of silver owned by ETFs, which surged sharply at the beginning of the year.

As we mentioned in passing yesterday, some of gold’s recent woes may be due to investors swapping it for bitcoin. Those doing this, believing BTC to be a “better version” of the metal are very much mistaken in my view – and are giving us an opportunity to buy gold at a cheaper price.

But in today’s note I’d like to share one of my colleague’s thoughts on this topic. This is a recent piece by my colleague Will Dahl over at our premium eletter Southbank Investment Daily, where he investigates how bitcoin may have been “cannibalising” a gold rally…

By Will Dahl, Southbank Investment Daily

Bitcoin is often described as “digital gold” thanks to two properties the assets have in common.

First, they’re remedies to quantitative easing (QE) and inflationary policies. Governments and banks can’t create more of either (though there’s a major caveat on gold I’ll get to later).

Second, increasing supply becomes exponentially harder as more of each asset is “mined”. In gold’s case, much of the easiest-to-extract ore has already been mined, making longer and more expensive extraction projects necessary. And bitcoin mining becomes more difficult with each “halvening” – a key reason that bitcoin could be consuming more energy annually than all of Argentina, per one University of Cambridge study.

So bitcoin and gold are often lumped together as inflation protection and hedges against central banking “madness”.

There’s been plenty of this in recent months, as the Bank of England conjured another £150 billion out of thin air last November, part of an expansion in QE that has surged from £200 billion in 2009 to £745 billion today.

In the US, a deficit of $2.3 trillion for 2021 is projected. And the EU is expected to inject another €1.6 trillion through QE from December 2020 to December 2021 – and that’s on top of the €800 billion it had already unleashed after the pandemic broke out.

This should be an enormous catalyst for gold prices. But despite the currency-degrading policies of the last six months, amounting to trillions of dollars globally, gold prices have fallen since 1 January from $1,893/oz to around $1,730, as of the beginning of April 2021.

This 8% decline for gold prices wouldn’t be so notable if not for the contrast with bitcoin’s 75% rally over the same time frame: 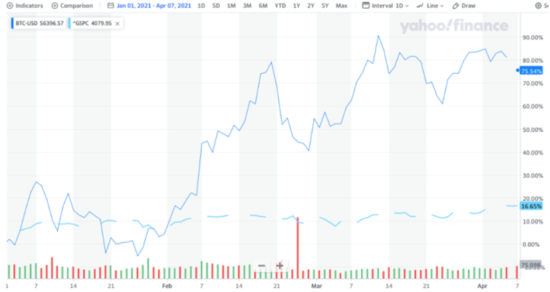 Bitcoin’s market capitalisation sits at just over $1 trillion today, meaning that the 75% surge added more than $400 billion to its valuation… at a time when gold prices fell 8%.

Could it be that a large part of that arose at a would-be gold rally’s expense?

“Better at being gold than gold.”

“Bitcoin is better at being gold than gold,” the 22-year-old entrepreneur told them.

It was the year 2012, and Charlie Shrem was appealing to two angel investors to consider his startup, BitInstant. The company sought to enable other companies and organisations to use the three-year-old bitcoin as a medium of exchange – but Shrem needed establishment money to help bitcoin move past its reputation as a tool for cyber criminals and drug smugglers on Silk Road.

He explained to the room how gold’s place as the preeminent store of value throughout history had been almost preordained by the periodic table.

As Ben Mezrich, author of Bitcoin Billionaires, summed it up:

Initially, gold’s chemical properties made it the natural choice; going down the elements of the periodic table and analyzing their properties, you could cross off the gases – right from the get-go. Since whatever substance was going to be used as money couldn’t be highly reactive – otherwise it might explode in your hands – and it couldn’t be corrosive – otherwise it would rust – that disqualified another 38 elements. And since money had to be rare, but not too rare – a metal like copper was too abundant, while a metal like osmium was too rare, being only found in meteorites – that ruled out another 26 elements.

Which left only rhodium, palladium, platinum, silver, and gold – five of the eight noble metals. Rhodium and palladium wouldn’t be discovered until the 1880s, well after money had been in use for thousands of years; and platinum’s melting point would have been too high for preindustrial furnaces. By process of elimination you were left with silver and gold. Silver tarnished easily and had a much greater industrial application – too useful to make good money – leaving gold just useful enough.

Gold, he pointed out, was valuable thanks to not only its scarcity but its fungible nature, its portability, and the difficulties in counterfeiting. But bitcoin could beat gold solidly on three of those fronts. It was infinitely more portable, since it could be transferred thousands of miles in half a second. It was more fungible – you didn’t have to melt any bitcoin to make it blend in seamlessly with the rest of your stash. And thanks to blockchain technology, it was even harder to counterfeit – impossible, even.

Even so, bitcoin and cryptos in general still have a way to go before they can dethrone gold, or even fiat currencies.

In a note published last month, the Bank of Singapore identified two major hurdles bitcoin must clear before it can seriously challenge gold as a store of value.

As the Bank of Singapore put it: “First, investors need trustworthy institutions to be able to hold digital currencies securely. Second, liquidity needs to improve significantly to reduce volatility to manageable levels.”

Gold can fluctuate too, of course – but drops of around 40% are unusually severe declines amid years-long bear markets, rather than a drawdown over a few months or even weeks, as is often the case with bitcoin.

Here at Southbank Investment Research, we don’t think gold is on its way out – in fact, keep an eye out for a special message from us over the next two weeks on that front.

PS Last week I made the argument (in jest) that Osama bin Laden was the creator of bitcoin. Who do you think it might be/have been? Let me know here.