The real reason we don’t hear from Satoshi any more…

The real reason we don’t hear from Satoshi any more…

After years of struggle… endless debates, fights, and bickering… from rootless speculation to ludicrous allegation, in a seemingly bottomless pit of conjecture…

I know who Satoshi Nakamoto is.

The pseudonymous creator of bitcoin, who mined an estimated ₿1,125,150 for himself and then sat on it – that’s 5.35% of total possible BTC supply – has successfully concealed his identity ever since he arrived on the scene. That hoard, worth some £45 billion at current prices, remains untouched. That’s well over a million kilos worth of gold…

This man certainly had a talent for hiding, that’s for sure… and when you know who it is, it all makes sense.

Rest easy dear reader, for I know who he is. Or, more accurately – was.

I’ll let you join the dots: 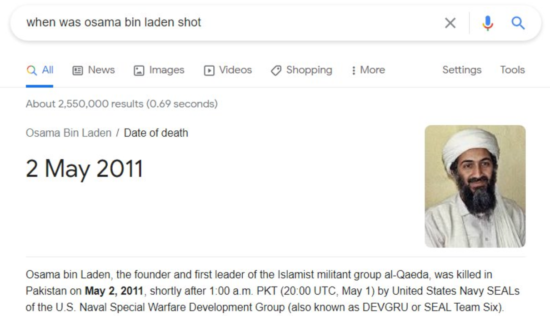 I just had to think of the dumbest possible answer to the question, and it all suddenly clicked.

The reason for Satoshi’s concealment and subsequent vanishing… the reason he never claimed his gargantuan fortune… was because he was gunned down by order of the US government almost exactly a decade ago.

OK, I admit I’m being very flippant here. But it is an interesting thought-exercise, if nothing else. Humour me: why not Bin Laden?

Bin Laden wanted to (and of course, did) attack and disrupt Western countries. What better way than to attack their money system? Bitcoin was intended as a challenge to fiat currencies – and it certainly has been disruptive.

Bin Laden was keen on avoiding the US dollar. He rightly feared that dollar bank deposits Al-Qaeda controlled could be frozen by the US Treasury Department. He encouraged the use of the euro, the renminbi, and the Kuwaiti dinar to circumvent the dollar financial system. Who’s to say Bin Laden didn’t want to develop a better vehicle for such transactions in-house? After all, BTC has been used by terrorist organisations in the years since he was killed to transfer (and maybe even store) wealth.

Financial elites all over the developed world have since been continuously drawing a line between bitcoin and terrorism – most recently US Treasury secretary Janet Yellen. Perhaps they know more about bitcoin’s origins than bitcoiners: the CIA did keep much of the data it harvested from Bin Laden’s computers out of the public eye for “national security” reasons…

Bin Laden was also very keen on gold – just as Satoshi was. “The overall price trend is upward…” he wrote in December 2010 to the “general manager” of Al-Qaeda, instructing him to buy $1.7 million of gold bullion bars and coins with the proceeds from the ransom of an Afghan diplomat. “Even with occasional drops, in the next few years the price of gold will reach $3,000 an ounce.”

Bin Laden had the motive, and he certainly had plenty of time on his hands. And he was very good at hiding – though not good enough, of course.

Was Satoshi’s final known email that he’d “moved onto other things” punctuated less than two weeks later by a bullet to the head from a US Navy SEAL?

Could this actually be an image of Biden, Obama, and Clinton watching the creator of bitcoin getting his brains blown out? 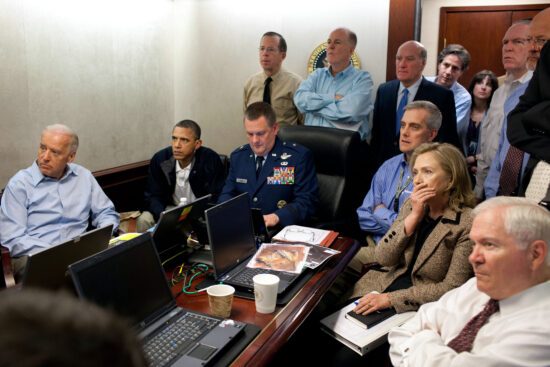 I’m getting a bit carried away here, as I’m sure you can tell.

To be clear, this is just a thought exercise – I don’t think Osama was Satoshi.

… but what would it mean if he were?

Imagine if such a revelation were to suddenly come to light. Imagine the kind of reactions we’d see if newspapers began publishing an image of Bin Laden photoshopped with the physical copper “bitcoin” we see in the press so often. The headlines would write themselves… “Osama ₿it Laden”, “Osama’s bit secret” etc, etc.

Would such dark origins doom the asset to draconian punishment by governments, despite the creator lying at the bottom of the Arabian Sea for ten years? It’s a “trillion-dollar terrorist attack” politicos might say – and it’d probably play well in the press.

Or hell… could the announcement that bitcoin was created as a strategic weapon – and not a West Coast whiz-kids plaything – actually make it a more credible investment? Its creator would be dead – but its utility would remain.

Your thoughts are always welcome.

PS While I don’t think Osama moonlighted as Satoshi, I do think Satoshi is dead. There are two individuals in particular who strike me as likely suspects in the search for Satoshi… but we may well never know. More on that to come.