ABERDEEN, SCOTLAND – One of my personal contrarian indicators has begun to flash a warning… but can it be trusted?

If you’ve been reading my scribblings for a while, you may well know the story about an old schoolfriend of mine asking me if he should invest in crypto at the peak of the market around Christmas 2017.

It’s a classic signal that a market has become overcooked – if your own schoolmates are getting in on the action, there can’t be many investors left to buy. And if the market is running out of buyers, it can’t go far before falling. But despite this pretty obvious warning, I didn’t take it on board – to my peril (a story I detailed in How I lost thousands in one of the greatest bull market in history – 3 March 2020). From my perspective back then, there were clearly more buyers out there as barely any institutions were taking part in the rally.

Little did I realise that they would not take part in that rally, and would only begin really participating in the space three years later, in 2020. The speculative crypto market really was running out of buyers, and would soon collapse under its own weight. It was “a learning experience” to say the least, and I now pay close attention when your old mates start giving investment advice.

In August last year, this same friend revealed he was getting into gold to make a quick buck (Looking down at my phone in horror… – 26 August). And indeed, that month marked a peak for gold which it has yet to recover from… 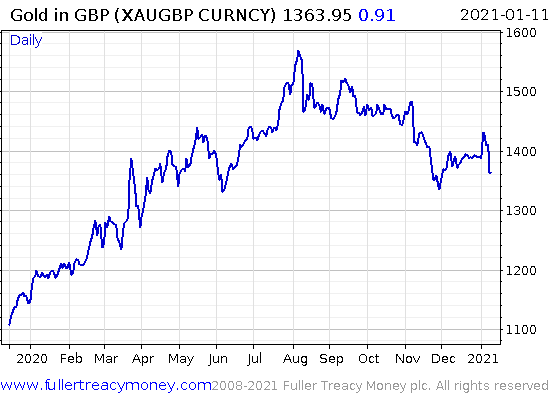 And now just yesterday, he revealed he’s in on bitcoin and has been licking his wounds following yesterday’s drop.

Is this the peak once more? Is bitcoin about to crumble in the month to come as it did the last time this happened?

My gut tells me no. To my eyes, yesterday’s washout was a much-needed pressure-release valve to let some of the excess steam out of the market. With the overly bullish leveraged players wiped out (what kind of lunatic needs leverage with BTC anyway?) this clears the way for bitcoin to consolidate and find a stronger footing at a lower price, where it can prepare for another move higher if there is enough demand. Just how low, I can’t say, but I would suspect above the $20k level at least.

But the last time I ignored this indicator, I was proven brutally wrong.

In a month’s time, we shall know the truth (or at least have a clearer idea) – I shall refer back to this note then, and see just how reliable “the schoolmate indicator” really is…

I was going to write to you about inflation and silver today, but then this happened. We’ll get back to that later in the week. In the meantime, I’ll continue printing some of the great letters you’ve been sending in following last week’s series of letters on bitcoin:

Re your question “BTC being used as a vehicle for capital flight.”

IMHO the clampdown on Hong Kong would probably encourage more people to get their capital out of China. Secondly, over a decade of ‘quantitative easing’ by the USA, UK and EEC and the extraordinary availability of new money to pay for problems caused by COVID-19 would mean that far sighted people and institutions might be considering ‘what’s to come’ if the capitalist system starts to break down, although some may consider that the start of the breakdown started with President Nixon’s actions in 1971 to pay for the war against North Vietnam and is now accelerating.

Fine observations all. Though I would go further back than 1971 to the beginning of the breakdown you refer to.

Nixon took the US dollar and the world off any semblance of a gold standard in 1971 when he declared that foreign governments would not be able to redeem US dollars for gold at a rate of $35 per troy ounce. There were so many dollars circulating around the world by then, that if several foreign governments took Washington up on its offer to redeem their dollars for bullion, the US government risked running out of gold reserves and going bankrupt.

While the Vietnam War exacerbated the problem of “too many dollars, not enough gold”, it was not the root cause. The forces which culminated in Nixon’s decision had been set in motion many years prior to his presidency. As Robert Roosa, who was undersecretary for monetary affairs under JFK, would say in 1984:

“… from the early sixties onward there was virtually no control over the worldwide supply and use of dollars… the enormous expansion in markets for US dollars offshore, and the new networks of interbank relations that made possible the creation of additional supplies of dollars outside the US and beyond the control of the Federal Reserve.”

To find the very beginning of these events which led to Nixon ending the dollar/gold link, you need to wind back to the end of the Second World War, when American banks set up shop in Western Europe to fund the reconstruction effort. Outside of Federal Reserve regulation, they could lend as much as they wanted (creating dollars) without any oversight.

And for a while, that worked in everybody’s interest – for bombed-out Europe was hungry to rebuild, and could use as much financing as possible.

But you can have too much of a good thing. By the time Nixon was in charge, these countries were flooded with dollars and governments like France decided to swap them for a golden life-ring.

Nixon gets a bad rap for stopping this, but what choice did he have? Allowed his nation to go bankrupt? He could have devalued the dollar but kept it on the gold standard (redeeming dollars for gold at $70, for example) I suppose, but that would likely just delay inevitable further devaluations (like US Congress forever raising the debt ceiling). It would also have almost certainly spurred more countries redeeming their dollars for gold, which in turn would accelerate further devaluations; a vicious cycle which in all probability would have led to what Nixon ended up doing anyway.

He could have reined in the offshore banks, but that wouldn’t have solved the immediate dollar abundance problem. And constraining offshore dollar funding would cause economic problems for the US’s allies which were dependent on it, which could push them into the hands of the friendly Soviets.

So what should Nixon have done? By his presidency, I think it was too late to stop the problem – it had been set in motion well before he arrived in the Oval Office. Withdrawing from Vietnam and axing government spending by that point wouldn’t have saved the gold standard, as the likes of France had already begun calling Washington’s bluff and swapping greenbacks for gold.

But as a goldbug, I’m very happy to be proved wrong on this. What would you have done if you had been Nixon in ‘71? Got a strategy which would have kept the dollar on gold? I want to hear it: [email protected].

While gold investors like to say that all paper currencies have collapsed throughout history… they often fail to mention that all gold-backed currencies have too. It is only gold itself which prevails.