“Sing out for him!” was the impulsive rejoinder from a score of clubbed voices.

“Good!” cried Ahab, with a wild approval in his tones; observing the hearty animation into which his unexpected question had so magnetically thrown them.

“Lower away, and after him!”

Is it Friday already? Sure doesn’t feel like it. The week has flown by for me, perhaps because I’ve been enjoying myself. Bitcoin has been the focus of this week’s letters as we approach the debut of our crypto docuseries going live next week, and the niche asset is a favourite of mine.

But while I’ve shared an anecdote or two on bitcoin and some of our editor’s analysis on BTC, we’ve yet to raise a telescope at what’s going on inside bitcoin and the broader crypto markets themselves. And we should, because something’s up.

It’s a bit of an enigma. Inside bitcoin’s blockchain – it’s means of processing transactions and ledger for recording them – some very large transactions have begun taking place, on a seemingly perpetual basis. Pretty much all the time now, seven days a week, individual transactions worth millions of pounds worth of BTC are being transferred within the bitcoin network, to the point where these ultra-large transactions are starting to crowd out the smaller ones.

The money being spent – the transactions themselves – originate from bitcoin “whales” – the oligarchs of the bitcoin space who own vast quantities of BTC. These great pools of wealth were often acquired by early investors in the space who saw the potential of bitcoin early on and scooped up a fortune for pennies as recently as four years ago (read: The Vladimir Club, 5 August).

Let me show you what’s going on under the bonnet. What I’m really talking about is the golden line at the top of this image:

What you’re looking at here is the dollar value (right-hand scale) of “blocks” of bitcoin transactions as they are recorded on the bitcoin blockchain. That red zone in the middle indicates that the majority of transactions are in the $10 – $5000 dollar range. But that golden line across the top, which has been persisting now for some time, indicates transactions valued well above $10 million, getting into the hundreds of millions of dollars.

The continuing presence of that golden line shows that these mega-transactions just keep on taking place.

Charlie Morris, our multi-asset fund manager who created the system that let’s me look at the image above made an even simpler visualisation of what’s been going on. 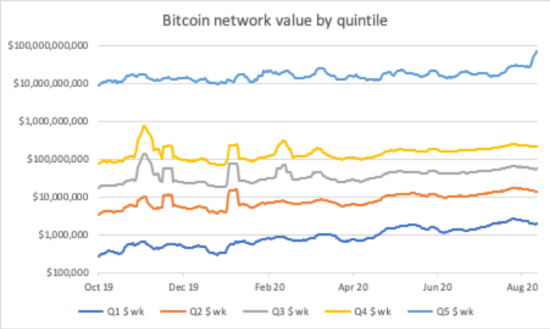 It could be that a new use case for bitcoin has shown up that we don’t know about yet – that the whales, early to bitcoin have again seen the future and figured out a productive means of using it that we’ll discover in due course.

However, the grimmer potential reality is that they’re just spending it amongst themselves to make bitcoin look like it’s processing more legitimate transactions than it really is.

As I said in yesterday’s note, if you want something to be a currency you need people to spend it. But if people aren’t spending it as much as you’d like, you can make it look like people are by making fake transactions – sending yourself your own money to boost the total £ value of transactions that appear to be taking place.

And with bitcoin, sending yourself your own money functions is as easy as sending yourself an email. While sending a BTC transaction does cost money, this is no object to the whales who would profit hugely if the price of bitcoin went up as a result of this potential manipulation.

The good news is that if this is an attempt at manipulating the BTC price higher by boosting the total transaction value going across the network (making the BTC network appear more valuable)… it probably won’t work.

While bitcoin is a very new asset class, it’s increases in smaller transactions (the four lower quintiles on that chart) that have correlated with an increased BTC price in the past – increases in mega-million payments have had much less of an effect.

But this whale-song echoing out from the depths of the BTC market remains an enigma. It could be manipulation – but it could be something totally different as well. Time will tell – and we’re captivated by the sound in the meantime.

I was going to tell you all about the gas crisis going on in the rest of the crypto space, but it’ll have to wait until next week – I’ve run out of space. But if the weekend passes at the same rate as this week has, you’ll be hearing all about it in no time at all.

In the meantime, make sure you’ve signed up to our crypto docuseries going live next week, and enjoy your weekend.

PS One of the most-read articles we’ve published this week came from my colleague Kit Winder, who wrote a rather cryptic piece with the headline “Blkjdfh98h52347vn345v687b3r078”. Thankfully, when it was time to publish it on the Exponential Investor website he gave it a more readable headline – click here to see what the alphabet soup was all about.