Rumblings of a rout?

Rumblings of a rout?

ABERDEEN, SCOTLAND – Another old schoolmate contacted me out of the blue the other day to ask me if he should buy bitcoin.

And now even Peter Schiff, notorious for his hatred of bitcoin, is talking about $100k BTC prices: 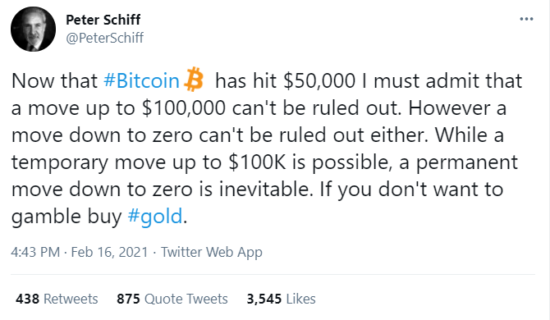 I stick by what I said last week in The supermodel trade – that we can’t trust the classic signals of a market top in a locked-down world foaming with social media. But hot damn… I’d be lying if I said these didn’t set off a few alarm bells.

I recorded a special “cryptocast” with my colleagues Sam Volkering and Kit Winder to celebrate BTC hitting the $50k level – it’s in post-production now, and will be with you tomorrow.

I remain cautiously bullish on bitcoin and the broader digital asset space. This party at the frontier of investment markets will end at some point – make no doubt about it – but I think that will happen when the lockdowns end and inflation arrives in a big way.

This goes against much of the bitcoin narrative, but as I’ve argued in the past, I think the arrival of high inflation would actually hinder the bitcoin price – to begin with. While bitcoin is often described as an inflation hedge, one needs to put that in the proper context. For while bitcoin has absolute scarcity built into it to prevent debasement… it trades like a tech stock on steroids. And if the tech rally powering it stutters due to inflation, BTC would suffer as a result – again, to begin with.

The market’s treatment of BTC may well change in an inflationary environment – Venezuelan and Iranian bitcoiners have certainly come to trust it as an inflation hedge after all. But I think the initial disruption of inflation wrecking tech would damage BTC at the outset.

So if the governments aren’t letting us into the pubs yet, and inflation stats have yet to blow out, the internet stocks and BTC rally may still have some more juice left in the tank. And the thing with BTC bull markets is that they rally the hardest and the highest at the very end – with a parabolic, blow-off top.

That said, markets are forward looking – and as we detailed in yesterday’s note, commodity markets are beginning to shout inflation. The inflation scare that would wreck the tech rally and pull the brakes on bitcoin could arrive before said inflation actually arrives.

I don’t think we’re there yet – but I could be wrong. And there are other rumblings in the financial system which may be cause for concern…

The WuFlu panic and resulting collapse in economic activity drove investors heavily into government bonds, crowding out the returns paid by them and pushing interest rates down to all-time lows. But that began to reverse in August, where bonds were finally sold off and yields began to rise again.

The US ten-year bond is a benchmark for global interest rates, as the dollar is the world’s reserve currency and the bonds are used heavily as pristine collateral within the banking system. As a result, rising yields on the US ten-year mean interest rates rising generally throughout the financial system – something which can be dangerous in an ever more indebted world, especially if it happens very rapidly. The yield (the earned interest rate) on US bonds hasn’t got to a particularly high level yet – we’ve not even returned to pre-WuFlu rates. But the speed of the trend upwards appears to be causing some stress.

You can see the US ten-year yield rising in blue here, while the expected volatility of US bonds (effectively, the price of insurance against volatility in bond prices) is in green. 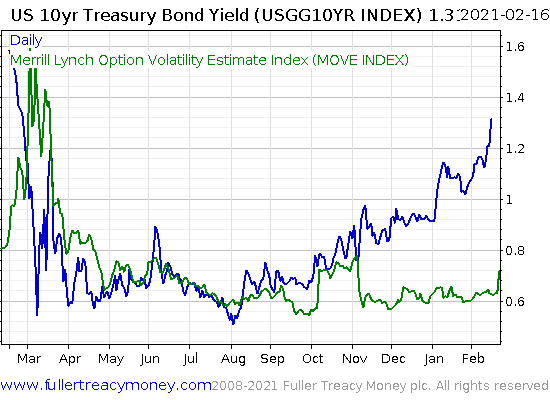 That small uptick on the bottom right may be a false dawn, but if it continues to tick higher, there’ll be trouble. If the bond market starts seizing up, the stock market will soon follow – for the bond market underpins everything from the stability of banks to governments being able to fund themselves. And a stock market shock would, in turn, harm bitcoin too. Despite its standing outside of the financial system, as we learned in March of last year, it’s not invulnerable to stock market shocks.

Ultimately, I expect if/when the rise in yields begins to cause even a smidgen of a problem within the financial system, the Federal Reserve will immediately begin talking about new money-printing operations to calm it. The pain tolerance of central banks is now plumbing all-time lows, and quantitative easing is becoming less like medication and more like breakfast for financial markets.

As an aside, it’s that rise in yields which has driven the sell-off in gold, as the inert metal struggles to compete against assets that pay interest. Considering how large my bitcoin position has become within my portfolio in recent months, it’s high time for a little rebalancing. While my BTC position will remain irresponsibly large, I’ll be shaving off a small snippet of “satoshis” and buying some more bullion with the proceeds…